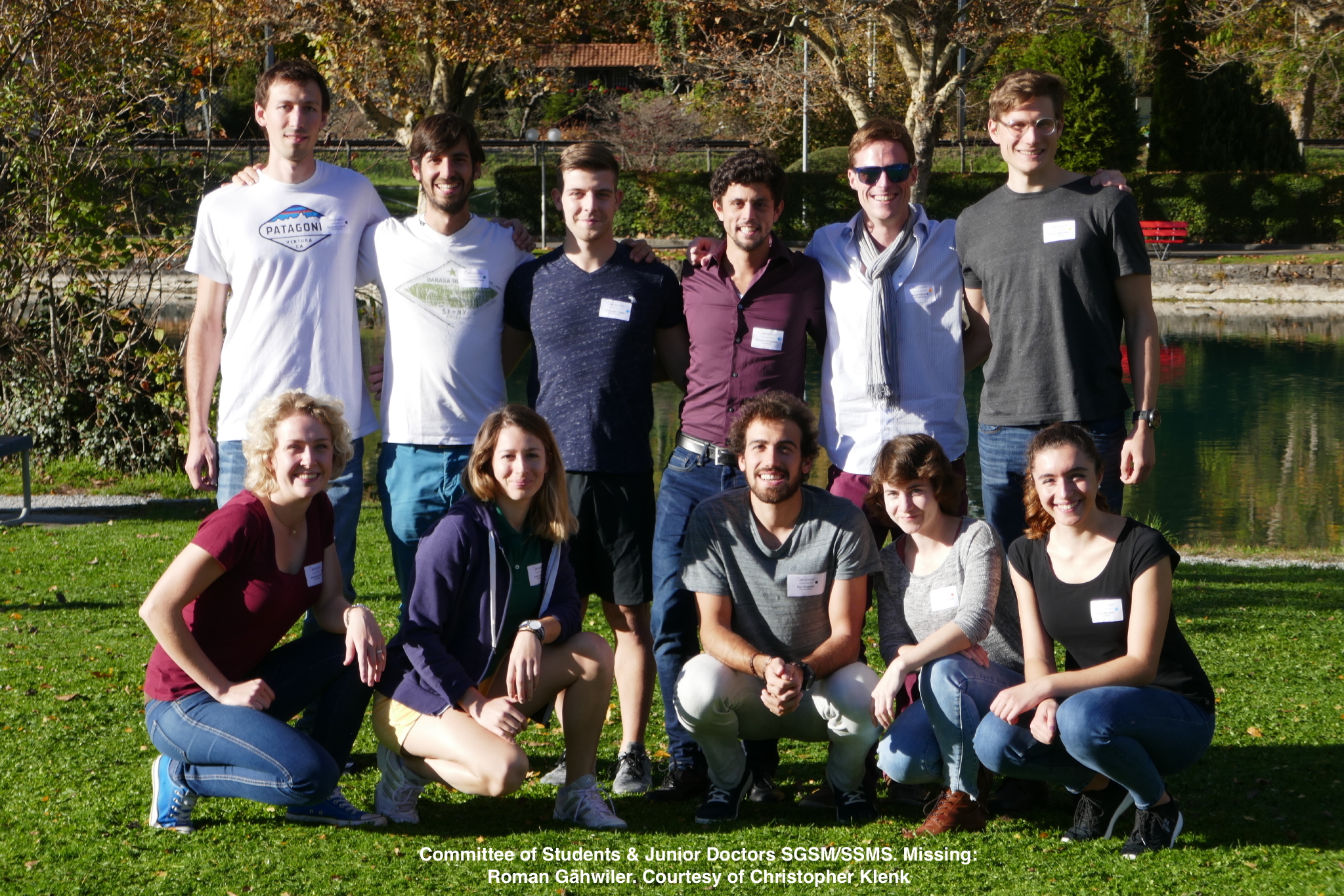 On 25th October 2017, the second edition of the Swiss Sports Student Day in Interlaken saw 111 medical students meet Swiss Sports Doctors to explore a common interest: Sports and Exercise Medicine (SEM) 1. Below, we share some key messages from the day.

Right from the get-go, Dr. Boris Gojanovic created an amusing atmosphere, asking students to find the 11 ‘R’s of concussion management in athletes and roar like a lion while announcing them2. We learned that symptoms of concussion might be unspecific and that “in the case of doubt, sit them out”, meaning that no athlete with suspected concussion should return to sport – even if it’s the final game. Respecting this rule, in most cases a concussion should heal in about 10-14 days. Dr. Gojanovic also presented the SCAT5 (sport concussion assessment tool- 5th edition) to recognise, assess and follow-up concussions3. Furthermore, we learnt that implementing rules around tackling, body checking are more effective that just wearing a helmet4. Lastly, he highlighted the importance of communication between athletes, coaches, professionals and employers, because usually, a good decision is a team decision.

Message #2: To screen or not to screen for sudden cardiac death… check the international criteria!

Prof. Matthias Wilhelm, cardiologist and sports physician at the Bern University Hospital talked about sudden cardiac death in athletes. He started off by making it clear that professional athletes in general live longer and suffer less from cancer or cardiovascular disease than those in the average population5-7. Giving the example of the Grand Prix of Berne (10 miles running event) he showed, that the risk of dying on a sports mass event is quite low (0.67 per 100’000, unpublished data). However, when it comes to ethnicity, there are huge differences: black athletes have a significantly higher risk of cardiac events due to the higher occurrence of hypertrophic obstructive cardiomyopathy (HOCM), since athletes from the Veneto region in Italy have a higher occurrence of arrhythmogenic right ventricular cardiomyopathy8-9. Hence, if the question of screening for sudden cardiac death comes up, one has to look closer at the population intended to screen. To screen in the most accurate way, it is recommended to use the “international criteria for electrocardiographic interpretation in athletes”10.

Lastly, Prof. Wilhelm reported the story of Gerald Asamoah, German soccer player diagnosed for HOCM, who refused to stop his career and has yet to suffer from any cardiac event. This highlighted the need to incorporate shared decision making into one’s practice and to respect the athlete’s autonomy11.

Prof. Arno Schmidt-Trucksäss, former physician of the German Olympic swimming team, spoke about how we, as young medical students can get physically inactive people, active.

First, he gave us evidence that physical inactivity is more prevalent than smoking, killing more people worldwide than smoking12. He made a comparison between drugs and physical activity prescription and came to the conclusion, that it is no longer acceptable to tell a patient you have to do “some” exercise, as no physician would ever advise a patient to take “some” drugs, only.

Physicians have to become more accurate in exercise prescription in order to make it more efficient. Parameters like type, frequency, volume, intensity, variation, periodization and adherence are of utmost importance. Prof. Schmidt-Trucksäss also highlighted that a low threshold into exercise training is key and that interventional results are sometimes surprising. He illustrated this with a study in which the use of e-bike versus normal bike in obese patients showed improvement of their VO2max in about the same extent13. Lastly, he introduced the concept of “exergaming”, a fusion of exercise and gaming in order to enhance a patient’s long term adherence. His team created “Mission Schweinehund” (German for swine) which is an app designed to help fighting one’s proclivity for inertia by rewarding regular physical activity while ensuring proper step-by-step execution of ten-minute workouts while taking into account the user’s physical restrictions and overall fitness. Results showed an increase in physical activity across all age groups.14

Message #4: Lukewarm is no good…

Last but not least, Dr. Steffan Griffin gave us insight on how to become involved in sports medicine as a student, and spoke of his experience in the UK.  He para-phrased Roald Dahl, saying that we shouldn’t be scared to approach things at full speed, because the rewards & opportunities that can arise within sports medicine are limitless. He reiterated that students and junior doctors should get engaged in their community, and that they aren’t just medical students but bright individuals with diverse skills, which should be developed and demonstrated continuously.

Dr Griffin stated that success starts by just showing up and remarked that showing our faces is central to gaining opportunities to be involved. His last piece of advice was to find a mentor – someone that can provide invaluable advice & support to help you up the steps in your long career ladder.

An afternoon of workshops … and a golden finish!

The afternoon transitioned to workshops. Students were taught how to examine the knee, shoulder and spinal column as well as a repeat their competencies in basic life support.

After the workshops, we got active with a volleyball and dodgeball tournament, and ended the day with food and drinks at a local bar.

We hope you enjoy reading our blog and we look forward to the third edition of the Students Day, which will take place on 14th November 2018 in Berne! 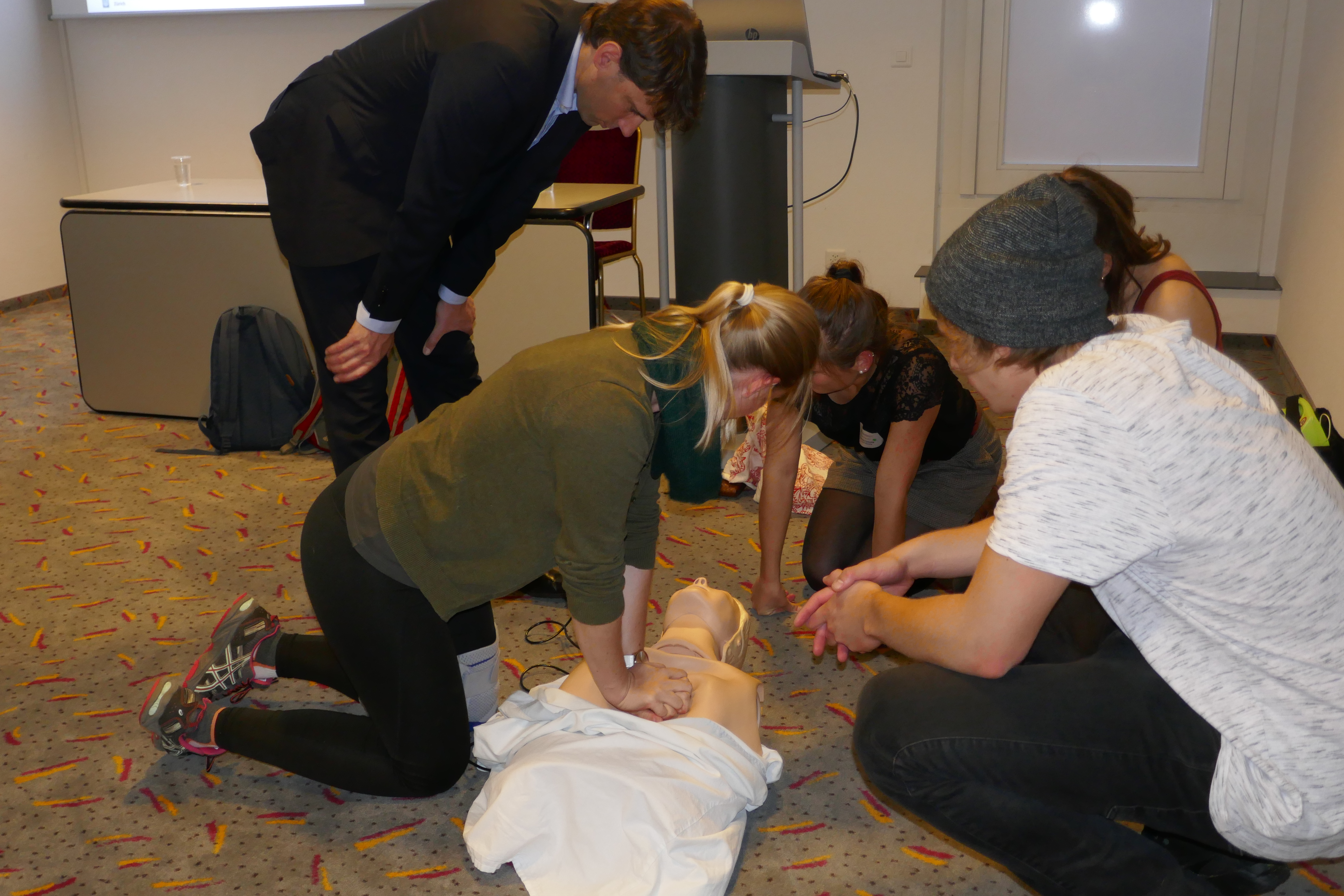 Alexandra Tewes is a third-year medical student from Zurich, Switzerland. She is a board member of Students & Junior Doctors SGSM/SSMS. She is also a former competitive swimmer, which taught her that athletes cannot be treated like any ordinary patient. Email: alexandra.tewes@uzh.ch

Nadine Werthmüller is a sixth-year medical student from Bern and a board member of Students & Junior Doctors SGSM/SSMS. She is passionate about skiing. Email: nwerthmueller@hotmail.com

Giuseppe Loggia is a third-year medical student from Fribourg, Switzerland. He is vice-president of Students & Junior Doctors SGSM/SSMS and a judoka. As a judo coach, he wishes to include more medical aspects in a trainer’s education. Email: giuseppe.loggia@unifr.ch

Justin Carrard is a SGSM/SSMS board member, president of Students & Junior Doctors SGSM/SSMS and coordinator of the BJSM Swiss Junior Doctors and Undergraduate Perspective Blog Series. He is currently working as a second-year internal medicine resident in Biel/Bienne (Switzerland). Email: justin.carrard@gmail.com