By Tom Goom @TomGoom, Sports Physiotherapist at the Physio Rooms and the creator of Running Physio; lead on Running Repairs Course  http://www.running-physio.com/running-repairs-course/

After a short hiatus we’re back with #AchillesAl part 3. We’ve touched upon training error and how to modify training to find the right level in parts 1 and 2. Next we have a couple of tricky questions from Al and have to consider the psychosocial factors in tendon pain…

“Will continuing to run damage my tendon?”

“Is it likely to lead to a rupture?”

We had some great discussion of this on social media. Check out the hashtag #AchillesAl and once again we invite you to tweet along and share you thoughts on this blog with @BJSM_BMJ and @Physiosinsport. @SportsTherapy56 was in fine form again- sharing some great recent tendon research, follow his thread here.

I think it’s fair to say the focus in tendinopathy research to date has mainly been on building load capacity and on the tendon itself. The role of psychosocial factors such as thoughts, feelings and beliefs around pain are discussed less often despite evidence of their importance in sports injury (Forsdyke et al. 2016). This is beginning to change though with a new systematic review just published in BJSM from Adrian Mallows and colleagues – Mallows et al. (2016). In addition, this excellent review of patellar tendinopathy from Malliaras et al. (2015) covers both psychosocial factors and central sensitisation.

Adrian has kindly shared some insights from his recent research;

Being aware that psychological variables may be associated with tendinopathy could assist the clinician in optimising management by utilising strategies to help overcome or reduce their influence. This may be particularly important when considering more invasive procedures such as surgery, as they are associated with negatively influencing outcomes (Brand and Nyland 2009, Cobo Soriano et al. 2010, Judge et al. 2012). As such, when a person is suspected to have tendinopathy, clinicians should firstly consider using validated screening tools for the presence of psychological variables. Secondly, although future testing by research is required, adopting an individualised management approach which aims to influence hope and positive beliefs (Benedetti et al. 2013) places emphasis on neuroscience education (Louw et al. 2011) or addresses individual cognitive behavioural barriers (Vibe Fersum et al. 2013) whilst maximising working alliance (Ferreira et al. 2012, Fuentes et al. 2014, Hall et al. 2010) are all plausible strategies to adopt in conjunction with a graded loaded programme (Littlewood et al. 2015, Malliaras et al. 2013)”

In a clinical setting concern about damaging or rupturing the tendon appears quite common and emerging research suggests it may be a barrier to rehab. We’ve developed TendonQ, a questionnaire to help screen for factors that might influence tendon health and response to rehab. Many patients, especially with longstanding symptoms, reveal regular concerns about tendon damage, so Al is not alone in this!

PT, “What do you think is happening within your tendon to make it painful?”

Al, “I’ve read that the tendon develops micro-ruptures that build up over time and these cause pain. If you keep running eventually this can lead to the tendon rupturing altogether.”

Beliefs like Al’s above aren’t that unusual. Sometimes we can even add to them! In insertional tendinopathy clinicians often recommend that people avoid activity that compresses the tendon. This may be sensible initially but can lead to long term patterns of avoidance if patients see these activities as damaging to the tendon. Choose your words carefully!

A positive perception of return to sport is associated with a greater likelihood of returning to your pre-injury level (Ardern et al. 2013) and confidence in the injured area can be an important part of that. It’s hard to have confidence and a positive perception if you see exercise as damaging. It may also increase perceived threat which could influence symptoms.

Perhaps a more positive message would be something like this,

PT, “Tendons are amazing, adaptive tissue. They get stronger with exercise a little bit like muscle does so regular exercise can reduce the risk of rupture rather than increase it. They tend to hurt not because of micro-ruptures or damage as such but simply because they’ve been overworked. Looking back at your training we can see that the achilles load has increased quite quickly. The tendon reacts to this with swelling and discomfort but this settles once the excess load is reduced.”

Al, “So running won’t damage the tendon, providing I don’t do too much?”

PT, “That’s right. We’ve modified your training to a level which should help encourage your tendon to adapt. We can then build up gradually towards your marathon. The tendon thrives with consistent exercise, it struggles if we fluctuate too much, both with big increases AND decreases in activity.”

There’s a good example of this final point from the NFL in 2011. An enforced ‘lockout’ prevented the usual 14 week pre-season training and instead resulted in a period of relative inactivity followed by an intensive training camp to prepare for the season in just 17 days! The results are startling – pre-season achilles tendon ruptures increased 4 fold! Approximately 8 achilles tendon ruptures might be expected in an entire season, in 2011 there were 10 within the first 12 days of training!

Putting this into a simple, positive message for Al, “It’s better for the tendon to keep running at a manageable level and loading the tendon than to stop altogether and start again.”

Every patient will require a different approach to discussing pain and re-framing the injury in a more positive light. Some may become fear-avoidant or concerned about long term implications. It isn’t unusual for some patients to have tried multiple treatment approaches without success. Understandably they can become despondent and deserve our support and empathy. The Pain Catastrophising Scale (PCS) can be a useful assessment tool in those with prolonged or severe symptoms. It helps to appraise a patient’s view of their symptoms and the impact they’re having on their life. Higher PCS scores (typically >30) may indicate a clinically relevant level of catastrophising and suggest treatment focuses more on pain education and self-management at least until this improves.

A pain monitoring approach is favoured in management of tendinopathy (as discussed in part 2) using a pain score out of 10 during activity and assessing symptom response over the following 24 – 48 hours. Such an approach can be very helpful in guiding a gradual progression of tendon loading, however, psychosocial factors may influence pain scores and symptom response. Recent work in DOMS (Delayed Onset Muscle Soreness) suggest that an athlete’s fear avoidance beliefs and trait anxiety before injury may influence reports of their pain intensity after exercise. Might we see a similar impact in tendinopathy? If so what would be the implications for how we use the pain monitoring system in those with evidence of fear avoidance and negative beliefs about pain? Share your thoughts on #AchillesAl.

Patient’s expectations and our own can be important part of tendon rehab. In particular understanding the timescales involved is key. For the patient, so they can expect 3 to 6 months of rehab, and for us so we don’t abandon a loading programme when we don’t seen changes in a couple of sessions.

Stress can delay healing (Alford 2006) and impair response to resistance training (Bartholomew et al. 2008). When building strength and load capacity is such a central part to tendon rehab stress could represent a significant barrier.

Chatting to Al about his general health we ask, “How are your stress levels?”

“Not good!” He replies, and explains that he works long hours, gets very little ‘downtime’ to recover, and isn’t sleeping well. He runs his own IT business and says it feels like he’s ‘constantly working’ (sound familiar?!). He uses coffee and sugary snacks to keep him awake during the day only to find he’s then wide awake at night! The dreaded, ‘caffeine cycle’ (courtesy of @Twisteddoodles)… Al’s has been coping like this for quite some time and the upshot is he now has hypertension and raised cholesterol alongside more stress as he struggles to get by on 5 or 6 hours sleep a night. He uses the running to help manage this stress (and lower his cholesterol) which adds a further level of complexity to his desire to continue running. A purely practical consideration too with such a lifestyle is how will Al fit any rehab in? This may well have an impact on our exercise selection, when we come to it.

These lifestyle factors may have a very direct link on Al’s tendon health. Hypertension has been associated with tendon pain (Abate et al. 2009) and raised cholesterol is thought to impair type I collagen production and reduce tendon strength and energy storage capacity (Scott et al. 2014). Less is known about diet although a diet rich in saturated fat causes significant tendon metabolic and structural alterations in mice (Scott and Nordic 2016). 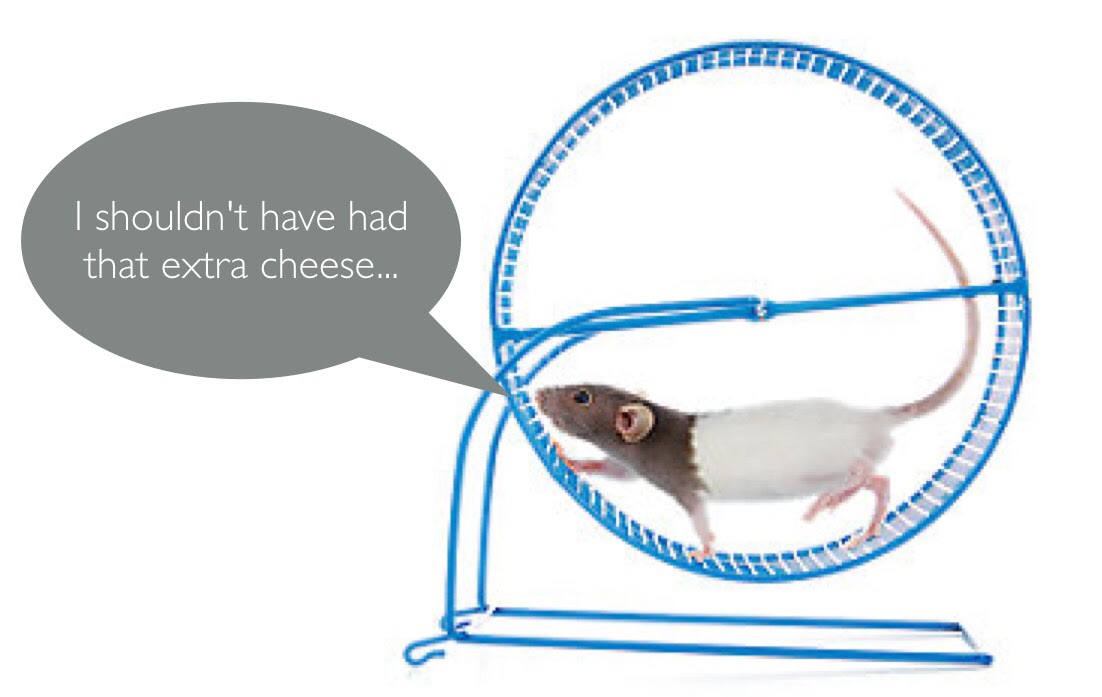 Stress and lifestyle may well then influence pain, rehab and response to treatment. This highlights how a very tendon focussed approach may miss the important bigger picture in tendinopathy. 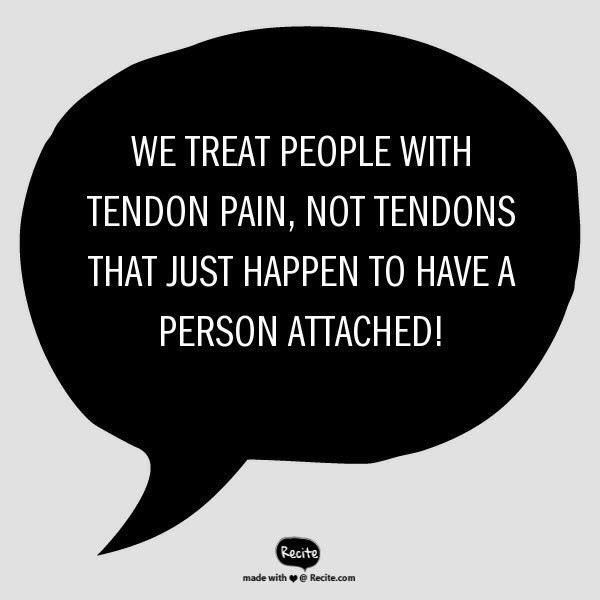 What we don’t know yet is how much of an impact these factors have on symptoms and function in tendinopathy. Equally though it isn’t always clear from the research what role biomechanics, muscle strength, flexibility and movement control have in pain. The challenge is to identify which factors are key for each individual patient.

A fascinating study in the Israeli Army reported that sleep can have a significant role in injury prevention (Finestone and Milgrom 2008). Combining a minimal sleep duration of 6 hours per night with a modified training regime helped reduce stress fracture incidence from 31% to less than 10%. This mirrors what we might aim to do in tendinopathy – identify relevant psychosocial factors and address them alongside addressing tissue load and load capacity. Further research is required however to determine the effects of sleep, lifestyle and psychosocial factors on symptoms and outcomes in painful tendinopathy.

These issues raises some interesting questions too and we’d love to hear your thoughts on this;

What is our role in addressing lifestyle factors including mental health? Are we equipped to do this?

Hopefully our discussion with Al with have reassured him that exercise has a positive effect on tendon health but we want to ensure this message is understood. Asking open questions like, “how might you describe what’s happened to your tendon to a friend?” Or “what key points have you taken from today’s session?” Might help clarify if we’ve helped change Al’s beliefs.

It may not be within our role to advise on mental health and diet in detail but we can act as a signpost towards the right services and resources such as suggesting Al speaks to his GP or counsellor about his stress or contacts a dietician regarding diet. Free online resources such as the mental health foundation website can be a great help, they also produce a free download to improve sleep.

Sometimes suggesting a subtle attitude change can help, one that moves away from self admonishment and criticism towards self care for both physical and mental wellbeing; 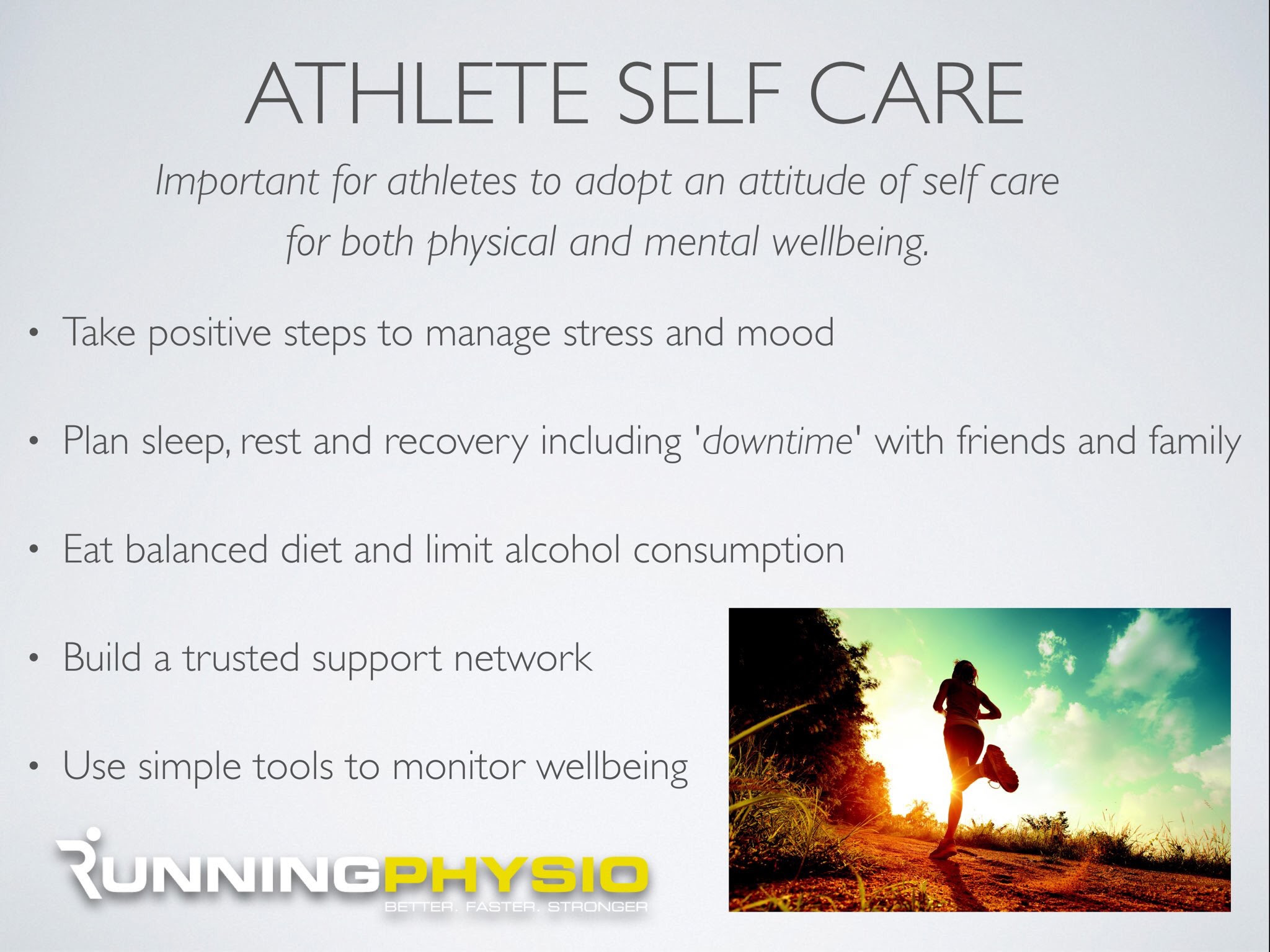 We have to recognise our limitations here though and, ideally, work together for the patient within an integrated multi-disciplinary team wherever indicated.

In part 4 we’ll be discussing exercise selection for Al’s achilles. Until then we’d love to hear your thoughts on some of the questions and issues raised in this piece. Join the discussion on #AchillesAl all views welcome!