Prof Steve Blair (giving the audience both barrels of evidence, below) provided the data and reminded us that 150 minutes of moderately vigorous activity weekly (walking to and from the fridge) will leave the low fitness group in the dust. Alternatively, 70 minutes of vigorous walking to the fridge will do it. Not a big ask. As he said, the folks who are ‘too busy’ to do this generally have 3-4 hours a day to watch TV. And I guess there’ll be a few who have 10-20 years in the grave to think about it. Sounds non-PC but is actually just a fact. 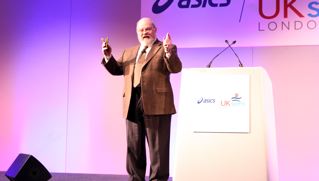 Prof Dan Lieberman, ‘the Barefoot Professor’ wore black slipper type shoes to remind us not to polarize the debate into ‘barefoot’ vs ‘shod’ running. He highlighted the evolutionary advantage that humans have to run down game in the heat. 9-15 km daily, daily, daily back in the day. He really argued for the benfits of forefoot strike to prevent injuries. He’s doing an interview with the BMJ team tomorrow and there’ll be a session on running shoes/orthoses/etc. with Benno Nigg too. In the meantime see orthotics and patellofemoral pain in the BMJ. 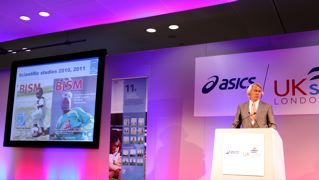 The FIFA research team (F-MARC) including Philippe Tscholl, Mario Bizzini and Jiri Dvorak (photo above) shared the facts that 2010 World Cup football players used medication including NSAIDs and cortisone at a remarkable rate – comparable to that of osteoarthritic octogenarians in a care facility.  A concern. Doctors must do better. No lessons learned from previous World Cups in Germany and France. In a nutshell – FIFA 11+ prevents lower limb injuries and is being rolled out around the world. Football for Health — health messages with players as ambassadors and school children as the target is proving effective and electric. Great uptake – a lesson in implementation which is the theme of January’s BJSM issue (2012). No hyperlink there just yet. BJSM Blog gives you today’s news but not tomorrow’s!

We are hours away from freshening up the podcast page with a suite of interviews. Just need to get the switch at BMA house. We’ll tweet you when it’s ready (@BJSM_BMJ).

And if you add a question for any conference speaker below we’ll try to get it answered. No promises though! Or via Twitter.