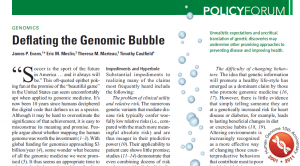 This paper in today’s issue of Science is going to get a lot of attention because it has multibillion (yes, billion, of not trillion) dollar implications.  The thoughtful, balanced perspective should influence health policy from the WHO through to the NIH and lead public health agencies the world over.

The international authors are not alone in making the point that we need to beware of the line between hype and hope. Brilliant scientific discoveries should be respected even if they do not cure cancer tomorrow.  The paper is very balanced – the authors assert that ‘recent methodological progress in genomics has been breathtaking’ but they warn against claims of immediate therapeutic solutions that are ‘too often unrealistic and counterproductive’.

They draw the comparison with the dot-com bubble and the housing market crisis — ‘the world has seen its share of inflated expectations and attendant dangers. Science is immune to neither’.

I see an increasing wave of ‘genome skeptics’. We are far from Gladwell’s tipping point but consider the intellectual heavyweights who have gone bearish on Magic Genome Bullet shares.  James Le Fanu was ahead of the wave with his 1999 best-seller – The Rise and Fall of Modern Medicine. Last year he anchored BMJ’s Head to Head with Is modern genetics a blind alley. Yes.  Just 8 weeks ago Jonah Lehrer had a fantastic piece in The New Yorker that kept academics the world over from their fascinating Departmental Meetings.

UBC’s Kaczorowski responded to a Lancet report of genetic risk factors for cardiovascular disease with an important counterpoint. ‘…it was very disappointing to see that, after millions, and perhaps billions, of dollars invested in genomic research over the past few years, there is so little to show for it.  Although the [genetic risk] score was associated with incident disease, it failed to improve risk discrimination. …Non-invasive, easily available, and often inexpensive traditional risk factors for CHD such as age, gender, or blood pressure outperform by a large margin a genetic risk score’.

Tim Caulfield, an author of the Science paper, interviewed on Canadian radio (CBC) also said that a measuring tape (waist circumference) and a blood pressure cuff provided more clinically-useful information than he got from his personal genomic risk factor screen.

When surgeons advocate against surgery it’s time to listen. When genetics epidemiologists and mathematicians are saying ‘promise should not drive policy’, ‘rethink priorities’, ‘real personalized medicine comes from your primary care practitioner’, its time to act.

In response to Kaczorowski’s letter (above) Finlands’s Samuli Ripatti, the preeminent genetic epidemiologist from the Institute of Molecular Medicine, spelled it out…”We suggest that the key promise of investigating the genetic causes of CHD lies not in risk prediction but in finding new causal biological pathways for CHD in human beings.” Really? I wouldn’t mind a buck for every grant that links genomics with ‘risk prediction’. Go to Pubmed ID paper 20468069 for example #1. Here’s #2 in Lancet.  Despite Ripatti’s concession, risk prediction has been a cornerstone for genomics advocates as discussed, and disputed, in this paper in Science.

I’m stopping there as this is a BJSM blog post, not a polemic. Congratulations to the authors for the courage of honesty, to Science for publishing a paper challenging dogma.

As I am not to a therapeutic nihilst, what thoughts do I have to seek health? Digest the fact that physical activity is the closest we have to a magic bullet (twice as powerful as stopping smoking for health) and it comes with proven adverse events like improved mood, cognitive function — adding life to years.

You don’t need lycra – walk, take the stairs. 150 minutes a week of accumulated physical activity will provide you more benefits than the richest person on the earth can gain from any dream team of physicians and knowldege of his or her SNP variants. And my genomics friends know it – they play tennis for health! 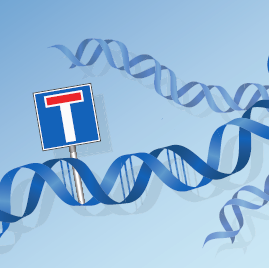 PS: As I wrote this, I found one of my favourite quotes on James Le Fanu’s home page – apt in the circumstances. ‘For every complex problem there is a solution: neat, plausible and wrong’. HL Mencken.