As I foretold three weeks ago, the UK government’s health secretary Jeremy Hunt recently announced his intention to impose his contract on the junior hospital doctors. His cunctatorial Fabian tactics predicted it. Ramifications of the word “imposition” imply comment.

Take the Indo-European root AP or APO, to reach, extend, or put. The derived Greek prefix apo-, from or away from, appears in many English words, among them several medical terms, including apocatastasis, recovery; apocrine (κρίνειν to separate), referring to glands whose products are formed from their own cells; apoenzyme, a protein that combines with a coenzyme to form an enzyme; apolipoproteins, proteins that bind lipids to form lipoproteins; apomorphine, which can be prepared by boiling morphine with concentrated acid, but which, unlike morphine, is a dopamine receptor agonist; apophlegmatic, an expectorant; apoplexy; apoptosis; apothecary; and apozem (ζεῖν to boil), a decoction or infusion of a medicine.

The Latin equivalent, ab, from, away, or lacking, also occurs as a prefix in medical words, such as abducent (ducere, to lead), ablactation, abortion (oriri, to rise), abreaction, abruption, and abscess. Abdomen may be related to abdere, to hide, but that is by no means certain.

Now add APO to SENI, an Indo-European reflexive pronoun, oneself, and you get aposeni, yielding the Latin word ponere, or to give its complete paradigm, pono, ponere, posui, positum, from which we derive “pose”. The Oxford Latin Dictionary lists 24 different meanings or sets of meanings of this highly versatile verb: place, set, put, pitch camp, station or post; set up, erect; lay foundations; plant trees; provide, supply; put down, take off clothes, have one’s nails cut, drop leaves, fall (snow, dew); lay down, rest, bend the knee; set aside, put in store, bury, lodge or file a claim; make the sea calm; abandon, drop; bring or put into, subject to a state or condition; cast in a position, appoint; give as a pledge or security; expend, devote, lay out money; set up a contest; bring to bear; ordain or lay down a rule, law, definition; state in speech or writing; express in art, depict; take as a principle, suppose; locate; esteem, value, count; make dependent upon; regard as consisting of. The meanings of  “pose” in English reflect this diversity: put forward or propose (1325); suppose or assume for argument’s sake (1385); place in a location (1425); place in an attitude or position (1826); behave pretentiously or affectedly (1840); assume a position (1850); propound or raise (a question, puzzle) (1862); present or constitute (a difficulty, problem, danger, or threat) (1873); lay down a domino (1863). The dates are those of the first citations in the OED.

The origin of the word “puzzle” is itself a puzzle, but just as nose leads to nuzzle and the Old French gosier (throat) leads to guzzle, so pose may lead to puzzle. A poser, originally one who sets testing questions (1587), later came to mean a difficult or perplexing question or a puzzle (1793), and later still (1888) one who poses—a poseur (1869) or poseuse (1888).

It is perhaps not much of a puzzle why the government now insists on imposing an unacceptable contract on the junior doctors. They have painted themselves, and therefore the doctors, into a corner with the manifesto pledge to a seven day NHS. It is not clear, however, whether they really believe their own propaganda or are merely posturing.

You can add almost any prefix to ponere, creating too many derivatives to discuss here, listed in the table below. However, apart from imposition (see “in”), one deserves mention—oppose, which is what Her Majesty’s Opposition is supposed to do. The quality of the opposition to the unimposing imposition can be judged from reading the debate on junior doctors’ contracts, held in the House of Commons on 12 February, as reported in Hansard.

The Latin words “post”, after, and “posterus”, later, also come from APO. “Praeposterus” (literally “before-later”) meant placed in the wrong order and therefore wrong-headed or perverse. So “preposterous” is perhaps not a bad word to sum up this whole affair. 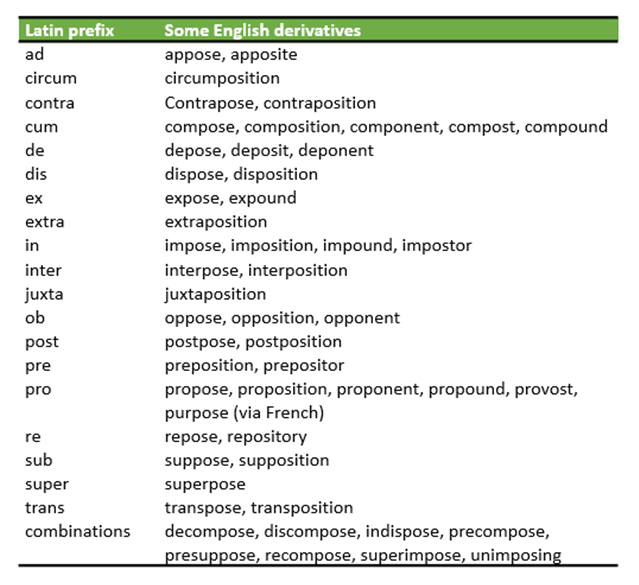