As I have previously described, delaying tactics in a conflict are known as Fabian tactics, after Quintus Fabius Maximus, who used them against Hannibal’s Carthaginians during the Second Punic War, and earned the nickname Cunctator, the Delayer. The dispute between the government and the junior hospital doctors drags on, and Jeremy Hunt/Cunctator seems to be continuing his delaying tactics, no doubt intending to impose his contract when the time comes.

However, he did not delay at all when recently given an opportunity to imply that current medical practice was substandard. A young woman, Mrs Frances Cappuccini, died after giving birth to her second child. The Crown Prosecution Service saw fit to charge one of the anaesthetists who had seen her during her final illness, Dr Errol Cornish, with gross negligence manslaughter and the Maidstone and Tunbridge Wells NHS Trust with corporate manslaughter, an offence that was added to the statute book in 2007, came into force in 2008, and has not previously been invoked. Another anaesthetist involved in the case, Dr Nadeem Azeez, was not charged, since he had already returned to Pakistan.

On only the second day of the trial, after the prosecution’s opening statement, Mr Hunt was quick to post a comment on Twitter: “Tragic case from which huge lessons must be learned.” This early verdict earned a rebuke from the judge, the Honourable Mr Justice Coulson, who ruled that it was “wholly inappropriate for anybody to pass comment which may be said to go to the result of the trial before that result is known, particularly in a very serious case”, adding that “It could be regarded as contempt of court” and ordering that the tweet be removed. Both the defence and prosecuting counsel in the case concurred with the judge’s opinion. In his ruling (see picture) the judge found that there was no case to answer: “It would be unsafe, and unfair to everyone (including Mrs Cappuccini’s family), to leave this case to the jury.” Or even, perhaps, although he did not say so, to Mr Hunt. 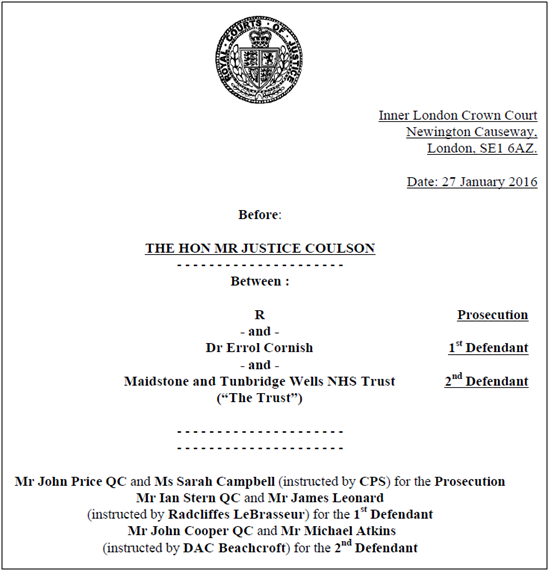 The Indo-European root TEN, or the o-grade form, TON, meant to stretch, strain, swell, or extend. Its many derivatives include tense, tentacle, and tendon, intend and extend, tone and tonicity. An extended form, TEMP, also meant to stretch. The temple is a part of the body over which the skin is tightly stretched, and to tempt someone is to stretch their willpower.

Another root, KOM, meant beside, near, by, or with. It has numerous derivatives. In Greek KOM gave κοινός, common. Epicene means common to both sexes and in grammar denotes words that have one gender but can denote either sex; “he” and “she” have gender; the plural form “they” is epicene and can be used as a singular form of the gendered variants. The alternative “xe” and its derivatives (xem, xyr, xyrs, xemself) has been proposed as a gender neutral singular pronoun. In Latin KOM became cum, with, which has given us countless English words beginning with con- and com-. Cooncan is a card game in which the players try to form sequences, from the Spanish con quién, with whom. In Germanic languages KOM gave ge-, as in genug, enough, and the Old and Middle English prefix y-, denoting the past tense, as in yclept, called, a usage that is found archaistically in later texts. In Milton’s poem L’Allegro, for instance: “But com thou Goddes fair and free, In Heav’n ycleap’d Euphrosyne”; and in Charlotte Bronte’s novel Shirley: “The old and tenantless dwelling yclept Fieldhead”.

A suffixed form of KOM gave the Latin contra, against or opposite, as in contralateral. In country dancing the dancers stand opposite each other in lines. But early modern playwrights often used the word “country” to mean something else—a different kind of juxtaposition, perhaps not unconnected with the Latin word cuneus, a wedge. “Do you think I meant country matters?” Hamlet asks Ophelia, who feigns innocence: “I think nothing, my lord”.

Add KOM to TEMP in Latin and you get contemptio, scorn, and contemptus, the action of despising or the state of being despised—ignominy. Perhaps Jeremy Hunt might have indulged in more considered contemplation before allowing his contempt for the doctors to spill over into ignominious potential contempt of court.