Last Saturday (23 January) I went to Sam Wanamaker’s Globe Theatre in Southwark (picture) for a meeting of the Oxford–Globe Forum for Medicine and Drama in Practice, as part of the commemorations of the 400th anniversary of Shakespeare’s death in 1616, expertly organised by Shakespearean scholar Professor Laurie Maguire and her colleagues.

I gave a talk about the historical development of medicines regulation, relying heavily on R G Penn’s paper in the British Journal of Clinical Pharmacology, “The state control of medicines: the first 3000 years”. Having only 15 minutes to cover the subject, I restricted myself to the past 2000 years. I finished with what were not perhaps wise saws but certainly modern instances, describing some recent work on drug withdrawals because of adverse drug reactions discovered after marketing. For part of the talk I discussed apothecaries and their relations with physicians, particularly during the period of Shakespeare’s life.

To study the Indo-European root DHE is to receive an instructive linguistic lesson. The basic root is the so called e-grade form, DHE, meaning to set or put down, to make or shape. But vowels change readily, by the mechanism that Jakob Grimm called ablaut (literally an off-sound). The o-grade form is DHO, and in the zero-grade form the final vowel is replaced by a neutral vowel sound called a schwa, after the Hebrew vowel of that name. The schwa, represented by an inverted e (ə) typically occurs in weakly stressed syllables, like the a’s in “apothecary” (/əˈpɒθɪkəri/). Thus, DHƏ. The various forms can have prefixes and suffixes and may be reduplicated. This gives rise to a myriad of words, examples of which follow.

DHE gives deed, misdeed, and the obsolete alms-deed; as Queen Margaret says of Richard Duke of York in 3 Henry VI, “Murder is thy alms-deed—Petitioners for blood thou ne’er putt’st back”. DHO gives us do, doing, and done. DHEM gives deem and theme, and DHOM gives doom and words ending -dom, like leechdom. Abdomen is conjecturally from the Latin abdere, to put away or conceal. Reduplication, DHE-DHƏ, gave the Greek τιθέναι, to put or place, which yields the trilogy of dialectical materialism, thesis, antithesis, and synthesis. DHEK gives theca (Greek θήκη), a sheath that encloses an organ, and apothecary, from the Greek ἀποτιθέναι to put away and hence ἀποθήκη a storehouse (compare “magazine”). 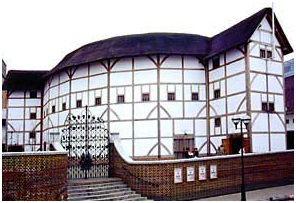 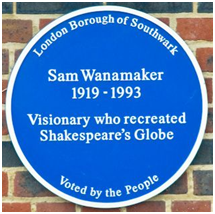 Images: The modern Globe Theatre in Southwark and the blue plaque that adorns its riverside wall

Apothecaries originally purveyed non-perishable commodities—spices, drugs, comfits, preserves, and the like. They were members of the Guild of Grocers, classed with pepperers and spicers, but they gradually focused on drugs, and by about the middle of the 14th century an apothecary was one who prepared and sold drugs for medicinal purposes.

In 1518 Henry VIII founded the College of Physicians, and in 1540 he promulgated The Pharmacy Wares, Drugs, and Stuffs Act, empowering the physicians to inspect apothecaries’ wares and destroy them if defective. This paranoid control continued during Shakespeare’s life, which may explain his portrayal of apothecaries as purveyors of poisons. When Romeo approaches an apothecary, seeking poison, the apothecary is reluctant to sell it to him, since it is illegal to do so in Mantua on pain of death. Romeo points out that the apothecary is poor and famished and will probably die anyway. The apothecary accepts his 40 ducats: “My poverty but not my will consents”. Contrast Cymbeline’s physician, Cornelius. The Queen asks him for poison, ostensibly for animal experiments, but actually intending to kill Innogen. He supplies a sleeping draught: “I do suspect you madam. But you shall do no harm”.

The apothecaries’ repeated efforts to have themselves recognised as independent practitioners were rewarded in 1617, a year after Shakespeare’s death, when The Worshipful Society of the Art and Mistery of Apothecaries was founded under James I. The title of the Society implied, no doubt, that a little hocus-pocus did not go amiss when your remedies had little or no efficacy. Rivalry between the apothecaries and the physicians continued nevertheless, even after the landmark Rose case in 1704. Today the Society of Apothecaries does not exercise its primary medical qualification, but offers a range of educational courses.