A continuation of a chat between Mario Bizzini (BJSM Deputy Editor), and Prof Masaki Katayose and Mina Samukawa, who were both instrumental to the medical set-up at #Tokyo2020. For part 1, click here

Covid-19 was obviously the “main companion” of these Games: did you had mandatory vaccinations? how did the controls/restrictions affect your daily work? Did you had to get tested daily?

(Masaki) In our country, physical therapists working in medical institutions were the first priority for vaccination, and as a result, almost all physical therapists had completed two doses of vaccination before the game. During treatment, we ensured PPE, a certain amount of space, and a partition between treatment tables. The tables and treatment equipment that serve as the treatment environment were disinfected each time, as well as thorough hand disinfection for each task. In addition, daily PCR testing was made mandatory.
It is worth mentioning that we have introduced a medical appointment system to avoid a three-crowded environment. The system allows all athlete and officials with registered ADs to make medical appointments online via computer or smart phone, and has greatly contributed to the efficient operation of the Polyclinic staffing and treatment environment. 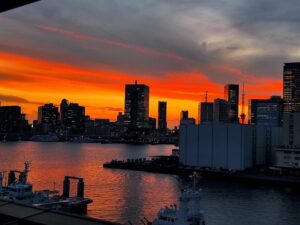 What about some language issues in communicating with the athletes? Did you also had English (as the main spoken language) courses as part of the preparation?

(Masaki) In this staff recruitment process, we ensured that about 25% of the total number of staff had a level of ability to work using English. These staffs contributed greatly to the project. In addition, Mina san took the lead in organizing the English courses in advance, which also contributed greatly to our success. The challenge was that there were quite a few athletes and officials who could not speak English. Spanish, French, and Arabic were essential, but there were no staff members who could handle these languages, so we used a Japanese voice translation system called PocketTalk (https://pocketalk.jp/s/language/en-us/?i=footer). Without it, we might have encountered a very harsh environment.

(Mina) Communication and providing physiotherapy in English were challenging for us. However, the goal was simple. We had English course series including communication in English, listening and speaking, key phrases for physiotherapy, case scenarios. The courses were made and taught by physiotherapists who work overseas. Before the Olympic games, intensive zoom English lessons were also provided by them too. We kept pushing ourselves. During the Olympics, physios were getting more and more confident to use English! Hence, other languages were needed too. Like Masaki san said, we used Pocketalk a lot. Amazing tool for us to use! Lots of athletes were using translation apps too so we were good with these situations.

Despite the Covid-19 protocols, were you able to experience some exchanges with international sports PTs working with their national teams?

(Masaki) Many PTs and doctors visited the polyclinic. In addition to the explanation of the clinic, I got the impression that they were very interested in Japanese sports PT.

(Mina) So many PTs from overseas were visiting physiotherapy room. They sometimes brought their athletes and asked us some ideas. We had all kinds of physical modalities so we discussed the treatment, which were really interesting too.

Prof. Masaki Katayose san: could you describe your typical day during the Games?

(Masaki) As I already described, I was the chief physio, but I also had to be the deputy operation manager for the whole polyclinic as well as for the competition. Because of this, I was on site or on call for most of the clinic hours from 7am to 11pm. I think I spent a lot of time at the polyclinic from 6:30 am to 9:00 pm.
A typical day consisted of a PT department meeting at 7:00am, a polyclinic-wide management meeting at 8:00am and participation in meetings until 10:00am, and then a meeting with the IOC until 12:00pm. I was involved in the overall operation of the Olympic Polyclinic beyond the physical therapy department, dealing with issues that arose daily, deciding on policies, and coordinating operations. As a chief physio, my duties include managing not only the polyclinic but also the PT service in the venue. In addition to the various administrative tasks at the Polyclinic, I spent the afternoon online managing the service at the 33 competition venues. Gymnastics, track and field, skateboarding, and tennis venues were visited during the Games.

Mina Samukawa san: could you describe your typical day during the Games?
(Mina) My shift was from 14:00 to 23:00 every day. We had a staff meeting before and after our shift. I was at a reception mainly and talked with athletes and team staffs as well as booked appointment. We provided an on-line booking system so encouraged them to use. Actually, it got very good reputation from athletes and staffs because of their busy schedules. I did allocate physios, talked to doctors about needs from athletes and conditions. My job is a kind of physio triage.

Prof. Masaki Katayose san: what was the most special moment for you during these Games?
(Masaki) To be honest, I’m so busy preparing for the Paralympic Games that I can’t think of any special memories. It’s a situation where I have almost no time for myself. When the Paralympics are over, I would like to think back on many things. I’m sure it will bring back a lot of things and remind me of the special time I had.

Mina Samukawa san: what was the most special moment for you during these Games?
(Mina) We had a great teamwork with diversity. Some are very experienced physios with great clinical skills. Others are great researchers, working for professional sports team or even good at administrative work. We were seeking the best answer (treatment) as such, the best thing we can do to athletes. Sometimes physios were sharing their thoughts and having discussions even after work. Enthusiastic and constructive colleagues made ourselves a lot of fun and interesting to work with. Until the Olympic games were finished, I was thinking the Olympics are our goals. Actually not. I found this was just a start for us to start doing things together. It is so exciting for us to think ahead. Legacy, this is it. We could realize this from our experiences. Those physios could tell their experiences with confidence at the Olympics to their colleagues, students and/or others. Thus, this is the start.
Another thing was that athletes and their staffs sometimes came thank us even after their competitions. Athletes share their experiences or cultures to us while they are getting treatment. Interesting talks and good laughs sounded fun to hear. They sometimes gave us pins as thank you gifts. Our staffs got so many pins and we found out athletes came visit us from all over the world. At the end of the Olympics, many thank you messages in their languages were drawn on walls by athletes and team staffs!

What was your impression on how the Japanese people lived the Tokyo Olympic Games, during this unique Covid-19 situation?

(Masaki) It’s very difficult to answer. I think you will get various answers depending on various positions. Although there are reports that the number of infected people in Japan is not high compared to other countries, the number of ordinary citizens who were under observation at home increased dramatically during the conference because of the limited facilities to accommodate Covid-19 patients. This situation led many to question the hosting of the Olympic. On the other hand, as more and more athletes appeared on TV screens, it was true that the Olympics moved many people, and some people began to think that it was a good idea to hold the Games. 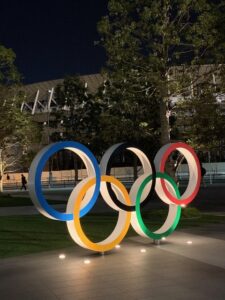 (Masaki) I think this experience had a big impact on sports physiotherapy in Japan. For one thing, I think it gave me a lot of confidence. Many athletes and officials praised the quality of the physiotherapy services provided by Polyclinic, and Marie-Elaine Grant and other IOC officials commented on the extremely high quality of the professional services, overcoming the handicap of operating in the Corona Period. In fact, not only massages and ice baths were provided, but also, a large number of therapeutic approaches by PTs. With this confidence, I think many PTs felt that it was time to share the activities and quality of Physio in Japan with the world. I think this has become a big legacy.
The other thing I felt was the impact on Japanese doctors who specialize in sports medicine. The fact that there was so much demand for physical therapy from top athletes overseas, and the praise for the treatment they received, has changed the way they look at physical therapists.
In the future, I would like to build and maintain a network group of members who were able to share the activities at the games, and at the same time, I would like to build a system to actively disseminate information in order to gain international recognition for Japanese sports physiotherapists. This is the big legacy that mina and I were hoping for.