In 2008, research showed that 58% of players diagnosed with concussion after the game had remained on the field after their head injury event(1,2). Since then, we have seen a paradigm shift not only in terms of how head injuries are viewed across the rugby landscape, but also in terms of the processes put in place to maximise player welfare. As the scientific knowledge in this area has evolved, rugby has evolved with it, whilst there remains work to be done, it should at least be acknowledged that more recent research has shown that the proportion of players subsequently diagnosed with concussions not being removed at the time of their injury has reduced to less than 10%(3).

One such player welfare initiative in place today across elite adult rugby that has contributed to these improvements is the Head Injury Assessment (HIA) protocol*. The HIA is a structured assessment protocol (using real-time video to support clinical assessment) that allows medical staff to manage head impact events where the initial diagnosis may be unclear and to differentiate between possible, suspected and confirmed concussions. (4). The off-field assessment is sensitive and specific (90% & 87% respectively) comparable to the use of MRI to diagnose rotator cuff tears. The diagnostic accuracy is improved by clinical judgement. (3)

Most people involved in rugby, will recognise that there are several ‘criteria 1’ signs that if observed require immediate and permanent removal (IPR) of the player, as they are automatically considered to be concussed. Generally, these clinical signs (which can be broadly summarised by the acronym #BUMP), account for between 30-50% of concussions. These are clinical signs, but in elite rugby to support recognition of a clinical sign there are also identified visible or video signs. For instance, loss of consciousness is supported by the following visible or video signs – falling without protection and lying motionless for more than 5 seconds. The visible or video signs support the recognition of a clinical sign. For most experienced doctors and therapists working in elite rugby, the clinical decision making and communication around these IPR events could be considered a straightforward part of the job. The task can be difficult for those early in their careers.

Dealing in shades of grey

However, as with most things in life, not everything is quite as ‘black and white’. Though guidance exists as to who should be removed for an in-match HIA through ‘category 2’ clinical and/or video criteria (which are based on empirical research and summarised in Figure 1), more tricky in practice is determining whether a player (who has not exhibited any criteria 1 signs) needs to be taken for a HIA (and a temporary replacement made). Though there is little debate around the removal of players who demonstrate evidence of #BUMPs, some of the language used as part of the ‘category 2’ criteria can be interpreted quite subjectively and, from experience, with a degree of variation. One medic’s interpretation of an ‘injury event witnessed with potential to result in a concussive injury’ or a ‘head impact where diagnosis not immediately apparent’ could theoretically and practically be very different to another’s. 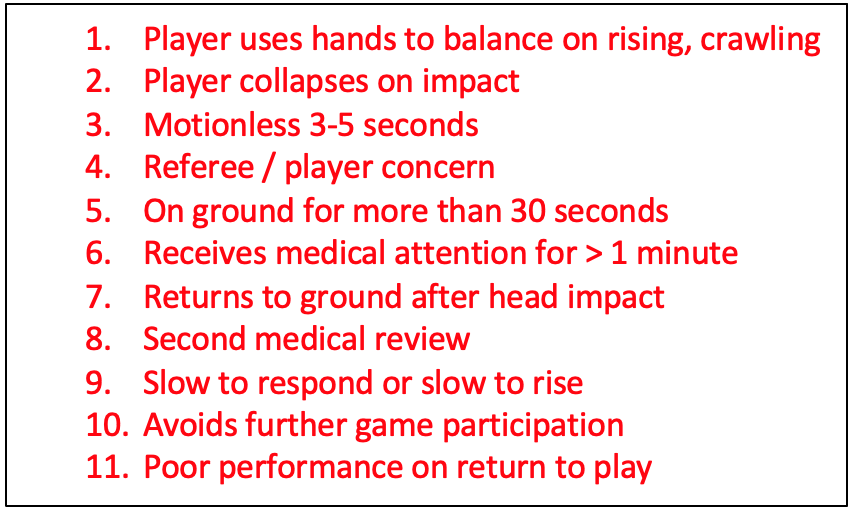 In order to further improve the consistency of decision making and to make the process as effective as possible, World Rugby, Premiership Rugby and the Rugby Football Union (RFU) have been intensively collecting and analysing HIA data from multiple data streams for a number of years. Whilst the HIA protocol has been widely accepted and supported as a significant development from a player welfare perspective, a few important clinical questions have consistently surfaced:

Provisional and (currently unpublished) data from the elite men’s game in England has shown that approximately 20% of concussions are diagnosed post-match without any form of in-match HIA (either on the same-day or up to 48-hours after the final whistle).

We should highlight that it is inevitable that some concussions will present as true ‘evolving’ or ‘delayed’ events, where no single inciting event can be identified and deemed responsible. However, through being able to see what matchday medical teams either ‘bookmark’ live on the real-time video recording system (and track whether any action was taken) or record in their report cards as events ‘of potential significance’, we were also able to identify the number of cases where an in-match inciting event had been identified but not definitively acted upon during the match.

As such, this 20% of concussions that were diagnosed post-match without any form of in-match HIA (which is an average of the last 2 seasons) includes:

Therefore, the target is the 10-13.33% of concussions that present post-game, but where an in-match inciting event was identified but not necessarily acted upon at the time. From a player welfare perspective, how can we try and ensure these cases have an in-match and off field HIA in future? Can we help medical staff improve the rate of recognition of possible head injury events?

We retrospectively analysed all of the ‘bookmarked’ video clips of events that likely led to players being diagnosed with a concussion post-match without an in-match HIA. We found that around 80% of these video clips consistently featured one or more of four behavioural patterns.

Whilst these visible or video signs have been highlighted in existing educational resources(7), they can be summarised and hopefully reinforced by the #OUCH acronym: 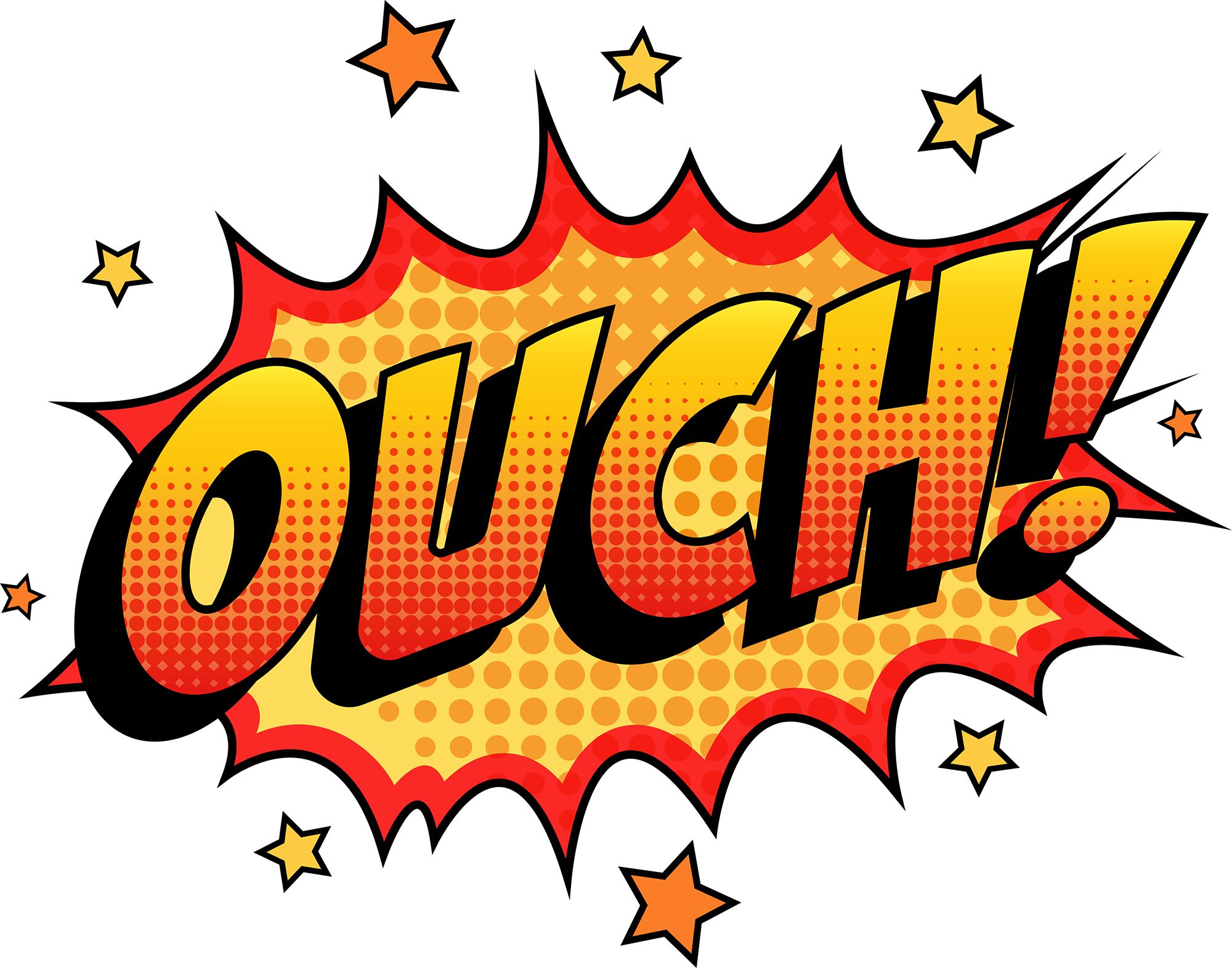 What are the practical implications?

These data can be used to inform conversations around how the threshold for a HIA could be adapted to further enhance player welfare. Through collaboration between World Rugby, the RFU and Premiership Rugby, all matchday medical teams are being notified of these findings and are being encouraged to use the #OUCH visible or video criteria both as a guide to inform clinical decision making, as well as a ‘term of reference’ to guide communication between independent medics and team medics. The key practical take-home message is that should one or more #OUCH criteria be observed by team medical staff practitioners and/or seen on video, there should be a clear and logical medical reason present to over-rule the player being removed from play for the structured off-field HIA (e.g a player staying down due to limb trauma/being ‘winded’ as opposed to a head impact) rather than being assessed whilst still on the pitch. These criteria will also feature as a key term of reference in the standard post-match independent HIA review process, to ensure that the important lessons aren’t consigned to the pages of medical journals and guides.

Efforts are already underway in the elite game in England to ensure that these findings are socialised to ensure that players receive the ultimate level of medical care, and that the medical attention they receive is informed by ‘real time’ data collection and collaboration. This approach has also been supported by representatives of international players associations, as seen below.

We look forward to reviewing the impact of this guidance over coming seasons and to working with a wide range of stakeholders over coming years to further enhance this process.

Conflicts of Interest: All authors receive financial remuneration and/or are employed in some capacity by the Rugby Football Union and/or Premiership Rugby and/or World Rugby. SG is also a Deputy Editor of the BJSM.

Acknowledgments: The author team are extremely grateful to all of the clubs’ medical teams and the independent match day doctors for their help in collecting data for this work.