Why is this topic important?

From both a player welfare and team performance perspective, it is of utmost importance that ‘time-loss’ injuries be prevented. To prevent time-loss injuries, we need to identify the leading cause of these injuries and understand ‘what goes wrong’ during them. Understanding what goes wrong during injuries may lead to more effective training interventions and/or policy changes, and as a result, protect players from injury and improve their welfare.

In rugby union, the leading cause of injuries is the tackle event – it has the highest injury incidence, may cause the greatest number of days lost (severity) and carries a high injury burden. The tackle is a specialised technical skill, therefore studying players’ technique during injurious events is a useful approach to understanding how tackle injuries occur.

One method to assess technique in the tackle is based on the diagnostic prescriptive approach, where a player’s technique is scored using a list of observable actions that represents the model form of the movement. The lists for the model form of the movement are derived from manuals and guidelines used by coaches to train safe and effective tackling and ball-carrying technique. In other words, these are the technical criteria coaches are currently provided with to instruct players on how to perform the tackle safely and effectively.

What did we do in this study to look into this?

Using this diagnostic prescriptive approach, we analysed tackler and ball-carrier techniques that led to moderate and severe injuries (more than 8 days time loss). We then compared the technical proficiency of the player during the injury to the player’s own injury-free tackles and ball-carries, and injury- free tackles and ball-carries from their teammates. In other words, the study had two ‘control’ groups. The study obtained tackle injury and video data from South Africa’s annual premier domestic senior male professional level rugby union competition, The Currie Cup, over four years (2014-2018). (Figure 1)

Figure 1 Breakdown of the number of selected tackle injury events, and player-matched (own controls) and team-matched (team controls) non- injury events. Tackle events are categorised according to the player’s role and the direction of the tackle.

When the injured group scored significantly lower (with a moderate to large ES) for a technique than the player’s own control and the team control, but the same technique was not different between the control groups, we interpreted this as the technical demand of the tackle, which expose all ball-carriers and tacklers to risk of injury. Techniques identified based on this interpretation may therefore have both tackle law and training implications. The specific techniques identified using this interpretation method are shown in Figure 2 A.

When we found moderate to large differences in technique between the two control groups, and the team control and injured group, but trivial technique differences between the player’s own control and injured group, we interpretated this as an existing technical deficiency of the player which placed them at risk of injury. Only two front-on tackler techniques were identified using this process—repositioning from an upright to a crouched (bent at the waist) body position when making the tackle, and legally contacting the ball-carrier with the shoulder as the first point of contact (Figure 2 B). 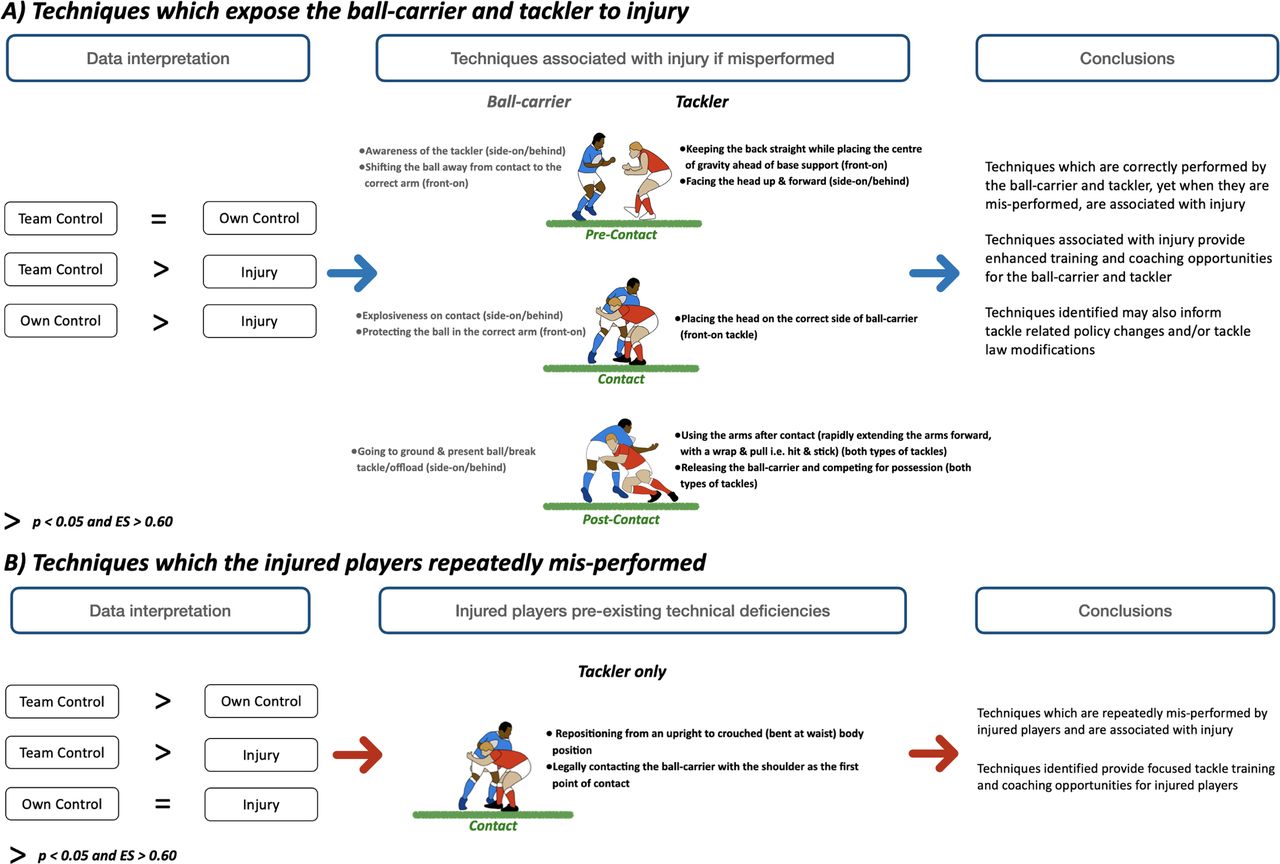 Where does this fit into the big picture?

Using the specific tackler and ball-carrier techniques identified in this study in conjunction with the technical skill training tackle framework, coaches and trainers can design and implement focused tackle training programmes and sessions. This will ensure tackle technique training sessions are optimised for learning and are effectively transferred to matches. Also, the findings from this study directly inform coaching curricula, which can assist coaches and trainers in optimising their tackle technique periodisation and training.

Player, coach and referee education is central to the success of national injury prevention programmes such as New Zealand’s Rugby Smart and South Africa’s BokSmart. This education is driven by research similar to that of the present study. As such, the findings of this study can also be used to inform and improve injury prevention educational resources and content.

In the event when a tackle injury does occur, knowing which techniques the players were lacking will also assist the return to contact process, and reduce the risk of re-injury.

Professional rugby teams operate under challenging time constraints due to travel and other commitments, with set training schedules. As such, coaches, trainers and medical staff need to use their time efficiently when working with players. Although this study analysed the injured players as a group, the same methods can be used to analyse the technique of individual players. Therefore, in a team setting, building a database of technical proficiency scores for the team, both in training and matches, and comparing each player’s scores with the team’s score, will help to identify whether the player has an existing technical deficiency.

Conflicts of interest: None