In young athletes, pre-participation screening is recommended to detect heart disease which can increase risk for sudden cardiac death (SCD) – but how useful is the physical exam in detecting potentially serious structural heart disease, and what is the best way to identify at-risk patients while avoiding unnecessary testing? This study is the largest to date to investigate the accuracy of cardiac auscultation (heart examination) to detect structural heart disease in adolescents; the full text is available at https://bjsm.bmj.com/content/early/2021/01/14/bjsports-2019-101718.

Why is this important?

Structural heart disease may be present at birth (such as valvular disorders) or develop during adolescence (such as genetic cardiomyopathies). Exercise in individuals with underlying heart conditions can trigger a fatal heart rhythm causing sudden cardiac death (SCD). As such, it is recommended that young athletes undergo preparticipation screening including a cardiac-focused physical exam. Unfortunately, data are mixed regarding a clinician’s ability to accurately detect murmurs representing pathologic heart conditions on exam. This study aimed to determine whether the presence of a cardiac murmur and its classification as physiologic (benign) or pathologic (concerning) were associated with underlying structural heart disease causing increased risk for SCD.

How did we go about this?

This study was a retrospective analysis of 15141 patients aged 12-19 with no prior cardiac diagnosis. Screening involved a patient-completed questionnaire including medical and family history; vital signs; cardiac auscultation while standing, supine, and supine with Valsalva; examination for signs of Marfan syndrome; and a 12-lead electrocardiogram (ECG). Murmurs were characterized as physiologic (grade 1-2/6; systolic; flow/ejection; decreased/unchanged with Valsalva) or pathologic (grade 3+/6; harsh; increased with Valsalva; diastolic or holosystolic; radiating; clip/gallop/splitting; crescendo-decrescendo). Limited echocardiography (ultrasound) was performed on any patient with screening abnormalities. The primary study outcome was detection of structural heart disease associated with SCD; the secondary outcome was detection of minor structural disease warranting future surveillance.

Cardiac murmurs were detected in 905 (6.1%) participants; 82.1% of murmurs were classified as physiologic, and 17.9% as pathologic. Echocardiography was also performed on 4333 participants without murmurs but with other screening abnormalities. Structural heart disease was detected in 2.8% of participants with murmurs and 1.4% of those without murmurs; the only finding associated with SCD was hypertrophic cardiomyopathy (HCM), occurring in three patients with murmurs (0.3%). Two patients with HCM had murmurs characterized as physiologic, and one had a murmur described as pathologic. All three had abnormal ECG findings including T-wave inversions, ST-segment depressions, pathological Q-waves, prolonged QTc and/or ventricular pre-excitation. Other minor structural heart disease in subjects with murmurs was predominantly valvular including bicuspid aortic valve, pulmonary stenosis, and aortic regurgitation.

What are the implications of these results?

First, the distinction between physiologic and pathologic murmurs was not an accurate indicator for the presence of serious structural heart disease, as evidenced by the fact that two thirds of patients with HCM had physiologic murmurs. Second, many minor structural conditions were also found at a similar prevalence in patients without murmurs, suggesting their detection by echocardiography may be incidental. 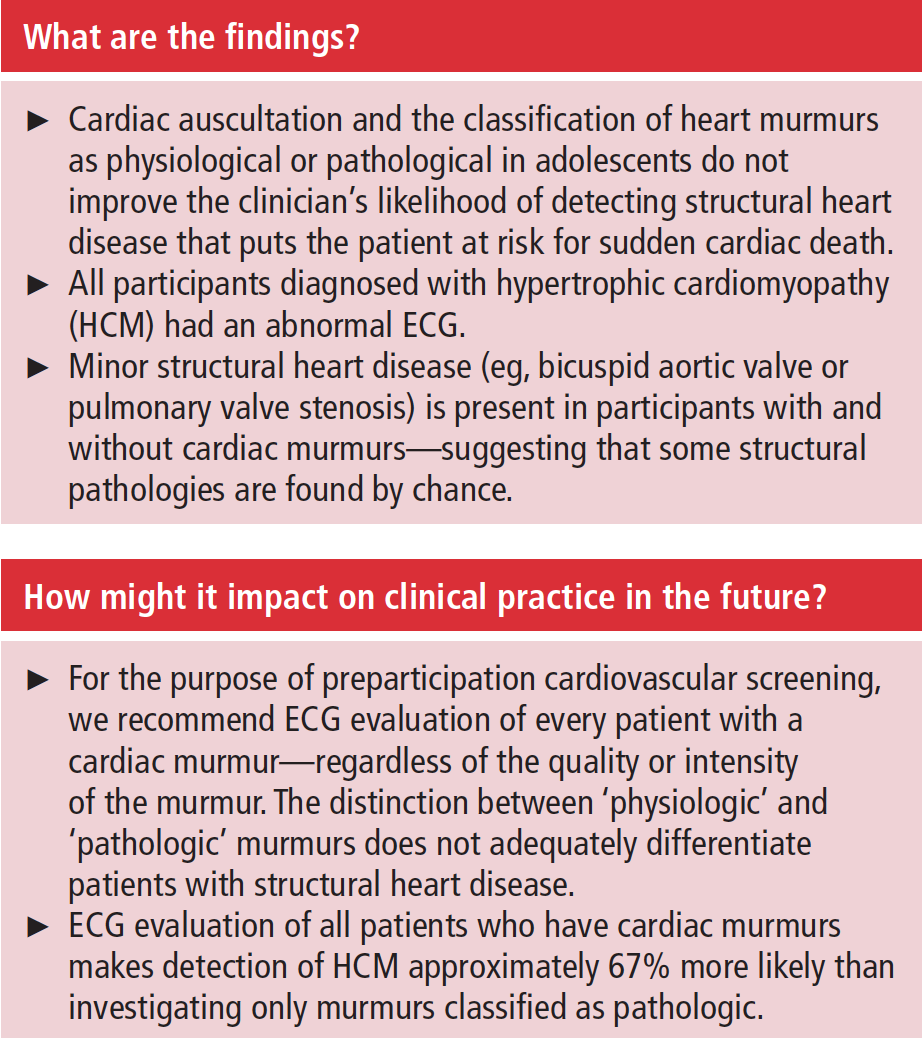 These findings suggest that pursuing further evaluation only in subjects with pathologic murmurs may miss potentially serious structural conditions, whereas evaluating all patients with murmurs can contribute to increased cost and testing burden for low yield. Importantly, though, all patients with HCM had abnormal ECG findings in addition to a detectable murmur. Therefore, if the goal of cardiac screening is to identify patients at risk of SCD – rather than simply detect any structural condition such as valvular disease – then a better approach may be to conduct an ECG in all patients with murmurs, with subsequent cardiac imaging in patients with abnormal ECG findings (figure 1). Further testing for murmurs with unremarkable ECG’s could be done at the clinician’s discretion but would likely not discover additional cardiomyopathy.

University of Washington School of Medicinem Department of Internal Medicine