The World Grand Prix of Figure Skating was held in Vancouver just last month. It’s the highest competitive level for Figure Skating outside of the Olympics and World Championships. BJSM editorial team (@Blazey85) caught up with physiotherapists working in this high performance sporting environment.

Figure skating features artistic poise and precision in a competitive sporting environment. The ability to produce an aesthetically pleasing performance requires a high degree of both athletic and technical skill. This article demonstrates the unique demands on figure skating athletes and vital role physiotherapists play in the long-term management of these athletes.

The main elements of figure skating vary by discipline: singles, pairs, dance or synchronized skating. All include a mixture of the following:

These skills need a variety of energy systems and strong proprioceptive control, summarised by the comparisons in table 1. 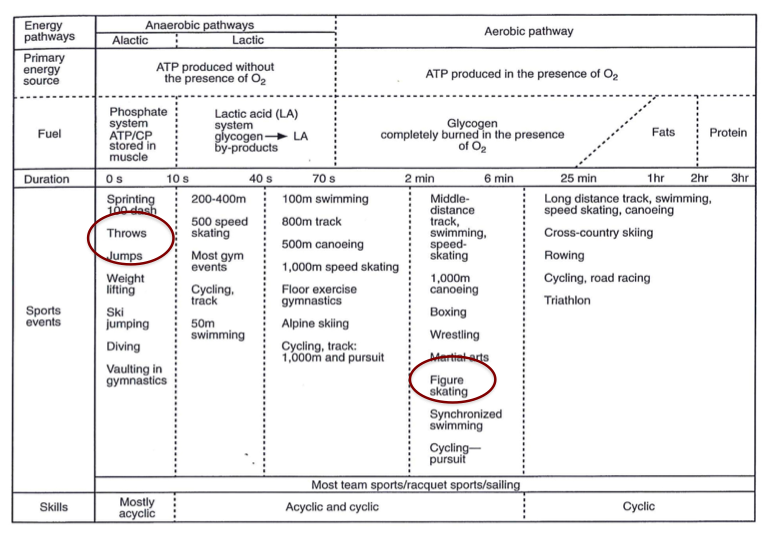 Short and free figure skating programmes last between 2:30 minutes and 4 minutes, both requiring athletic mastery and artistic expression. An excellent summary of the demands of figure skating is featured on the Olympic YouTube Channel.2 Figure skating blends the demands of middle-distance track running with the athletic and flexibility requirements of an Olympic gymnast. Figure skating can be defined as technical excellence at speed, while under pressure and fatigued (see figure 1). 3 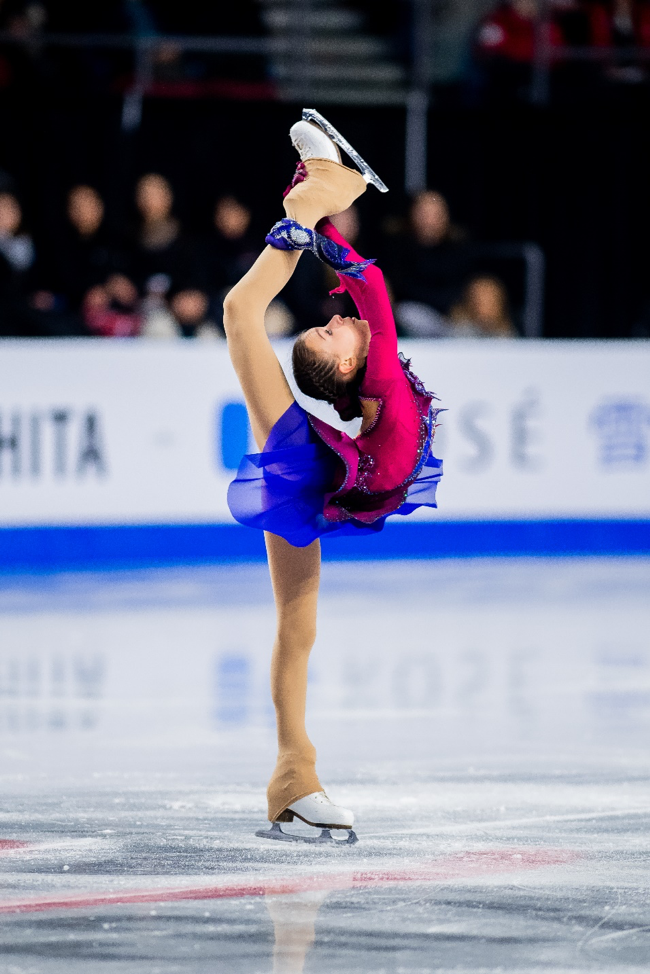 Do the high demands of figure skating create a specific injury subset?

Despite the high athletic demands placed upon figure skaters, there were very few in-competition injuries during the 2010 and 2014 Olympics (Vancouver and Sochi). 4,5 The biggest concern amongst skaters was the threat of illness (primarily upper respiratory tract infections). Figure skating competitions remain primarily an aesthetically-judged sport. This aesthetic drive may force competitors to become weight sensitive, with the related risk of developing low energy availability and conditions such as Reduced Energy Deficit Syndrome (RED-S) in both male and female competitors. 6

Epidemiological studies currently show a 50:50 mix of acute to chronic (overuse) injuries amongst figure skaters.7 The ankle is the most-commonly injured joint but figure skaters are also at risk of injuries throughout the lower limb and lumbar spine. Unlike distance runners, the lower leg musculature is less able to absorb ground reaction forces due to the stiff and rigid skate boot. This results in a more even distribution of injuries across the lower limb kinetic chain.

The required skating elements involve high demands for hip and lower lumbar flexibility which can lead to an increased incidence of hip and groin pathology. The extreme hip range of motion and the compensatory soft tissue laxity necessary to compete can cause instability, impingement, or combinations of both. The emphasis on challenging jumps in singles skating appears to have contributed to an increased incidence of bone stress injuries and early osteoarthritic (OA) changes associated with repetitive impact loading. This occurs in athletes with both pathological and normal anatomy as well as hypermobility of the soft-tissues that support joints.8

Other common conditions include retrocalcaneal bursitis (34% incidence in one study of elite and non-elite skaters), Achilles tendinopathy, ‘lace-bite’ (excess friction on the tibialis anterior and foot dorsiflexors) and patella tendinopathic conditions including tendinopathy and Osgood-schlatter’s.9 A useful summary of common injuries in figure skating taken from Porter (2013) is shown below in Table 2.10 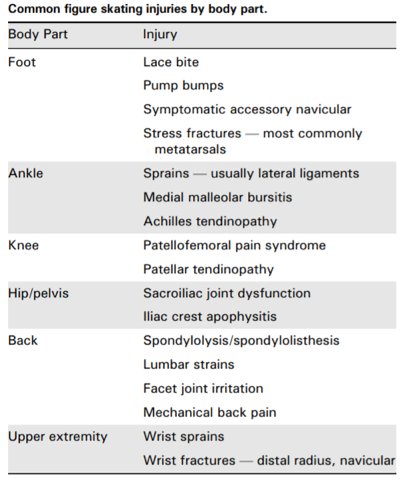 Rink-side, physiotherapists covering figure skating require strong emergency care and spinal injury management skills in the event of either a laceration injury (from skate blades), collisions or falls from a height (mainly during lifts or throws), concussion or more significant injury.  Outside of the skating rink, physiotherapy management mirrors the demands of many other sports with a focus on the following three core elements. 11

Conditioning- continued throughout the season. During pre-habilitation or rehabilitation, skaters often participate in off-ice classes such as dance, Pilates and yoga to enhance fitness, maintain muscle balance and promote neuromuscular training. This includes exercise to support stability during the high G-force actions of figure skating competition.

Flexibility- to maintain a larger-than-normal range of motion in particular at the hip and lumbar spine. This requires specific training to ensure the maintenance of controlled, functional ranges.

Strength Training– as appropriate for the unique skaters’ needs and skating discipline-specific demands.

The rehabilitation focuses on exercises that replicate the demands of on-ice training using a combination of the three core elements. It will often include dynamic resisted movements incorporating bands, weights, and high repetitions of landing positions, take-off positions, spin positions, lift positions, rotations, and other specific movements required by the athlete. Skills are broken down into their component parts (e.g. strength) and then gradually re-connected until the athlete can complete the entire skill effectively, without the risk of re-injury.  Progression through the exercises to the next level of difficulty occurs as soon as the athlete is able to correctly execute the movement and hold the positions under control for up to about five seconds. Positions are modified according to the specific skills the skater requires, and also based on input from the athlete’s coach regarding things such as specific angles of the free (unsupported) leg.

The above video demonstrates an example of an elite level figure skater going through an exercise progression to a double axel. This progression could be used for essentially all injury rehabilitation as it requires full-body conditioning, flexibility, and strength.

Figure skating is an innovative and ever-evolving sport that demands athletic, technical and artistic excellence.  Physiotherapists play a vital role rink-side and throughout the skater’s training and competitive seasons.  We hope this article has given you an insight into the physical demands placed upon Figure Skating athletes, their common injuries and shown you how you might further support these athletes in you practice. 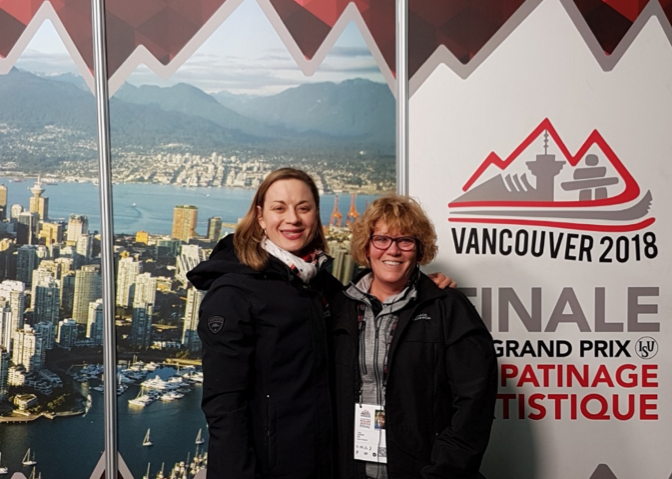 Thanks to Agnes Makowski and Paige Larson from Skate Canada for providing the valuable insight to develop this article. To follow or contact either Paige or Agnes see the links below.