The first Young Athletes Forum Convention (YAF) recently took place in Montreux, Switzerland. World leading experts from sports science and sports medicine met with other stakeholders to discuss the hottest topics in relation to young athletes. In this blog we share some of the key messages, which may be of special interest to early career scientists and doctors.

How does one select and manage young athletes to senior levels with maximum efficiency and effectiveness?

Manuel Coelho-E-Silva, from the University of Coimbra (Portugal), highlighted that the biological maturation varies inter-individually in rate and timing. He suggests that trainers should take this into account for young athletes training and selection.

Jason Gulbin, Director of International Sport Advisory Services in Australia, added that athletes’ development pathways are often non-linear and not reflected very well by competition results. He proposed to use the FTEM framework (Foundation, Talent, Elite and Master), which calls for a more holistic and multidisciplinary approach. The model does not follow equally strict chronological pathways, but rather developmental stages. It also allows for inclusion of more stakeholders in the process of talent development (Figure 1).

Ross Tucker, @Scienceofsport, South African exercise physiologist, pointed out that talent scouting systems in South African Rugby lose most talented young athletes between the age of 13 and 16, leaving no idea of where they go and how to reintroduce those “ghost athletes” into the system. He suggested a talent pathway model in which only 4% of “starter athletes” would make it to the top level (Figure 2). 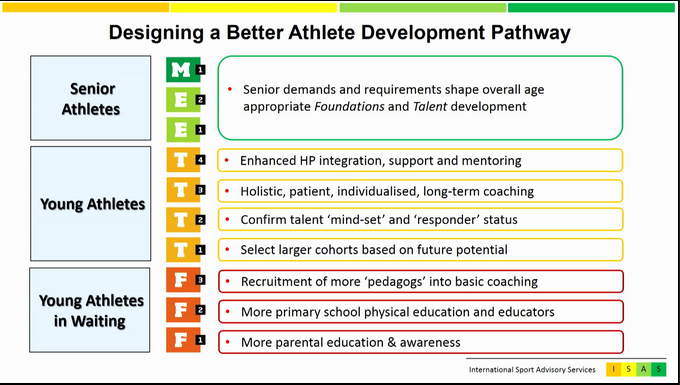 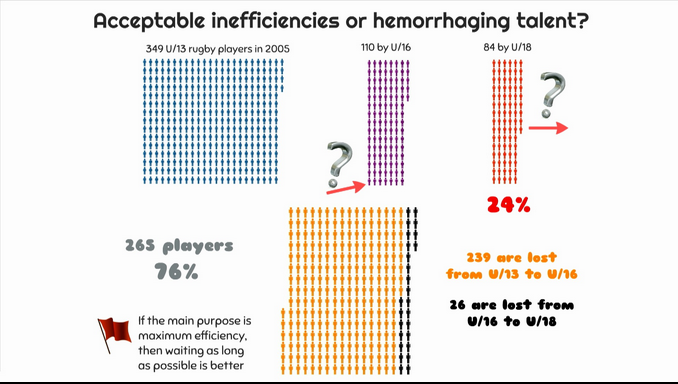 Does early specialization increase the risk of injury? And is it really necessary?

Mark Batt, Consultant in Sports and Exercise Medicine at the University of Nottingham, pointed out that early specialization and high unbalanced training loads for young athletes below the age of 12, increase the risk of overuse injuries. This could potentially contribute to the high drop-out rates of talented athletes before they reach elite performance level and may result in long-term health sequelae.

@NeeruJayanthi, President of the International Society for Tennis Medicine and Science, and Torbjorn Soligard, @TSoligard, Sports Scientist at the International Olympic Committee in Lausanne, convincingly agreed, that an early specialization does increase the risk of overuse injury and subsequent drop-out on the one hand, but could be necessary in some disciplines like gymnastics or swimming in order to increase the chances for becoming an elite adult athlete (1, 2).

Hence, a comprehensive load management, with respect to the balance of training and non-training load is crucial to preserve young athletes from overuse injury and long-term health sequelae without compromising their chances of a successful future career.

How does one best implement science into practice?

@EvertVerhagen, human movement scientist and epidemiologist from the Netherlands, gave a great example of connecting science with athletes’ and stakeholders’ interests to move science into practice. As 70% of children leave organized sports by the age of 13, one may assume that injuries probably play a decisive key role. Verhagen stated, primary school children who are less physically active are at higher risk for sports-related injury once they participate in competitive sports. He then presented the iPlay-study, which focuses on injury prevention by enhancing the physical literacy of primary school children before they even enter competitive sports. It implicates physical education classes at school, where children are taught simple games. Once they know the games, they start playing them by themselves during their breaks. Results showed increased motor control, increased academic performance and lastly decreased injury risk (3, 4).

@MarioBizzini, Swiss physiotherapist and Research Associate at the Schulthess Klinik in Zürich, presented the latest results of the well-known injury prevention programs “11+” and “Kids 11+”, which both show a reduction of non-contact injuries for up to 50% (5)!

Both examples highlighted the tremendous effects that can be achieved if scientists and stakeholders work together.

Should we screen all young athletes for potential causes of sudden cardiac death?

Matthias Wilhelm, @MatsBERN, Cardiologist at the Bern University Hospital, talks about the sense or nonsense of screening young athletes for causes of sports-related sudden cardiac death (SCD). He highlighted that in athletes under the age of 35, SCD is very rare and its causes vary considerably across the world. Hypertrophic (obstructive) cardiomyopathy (HCOM) is the leading cause in the U.S., while arrhythmogenic right ventricular cardiomyopathy (ARVC) prevails in Italy (6-9). Both pathologies can be detected in a resting ECG with good specificity and sensibility. However, in the case of coronary artery disease, which is the first cause of young athletes SCD in Australia, New Zealand and Switzerland, ECG is rather unspecific and little sensitive (8,9).

Last but not least, we should keep in mind, that excessive assessment may lead to unsettling the athlete or even unjustified training and competition restraint. Thus, physicians should respect athletes’ autonomy and the concept of “shared decision making”.

All stakeholders working with young athletes have to keep in mind that their first goal should not be to transform them into elite athletes at any cost but to provide a healthy and proper environment for optimal growth and development. Those future adults may be then better able to play a key role in our society by advocating for a healthy and active lifestyle. 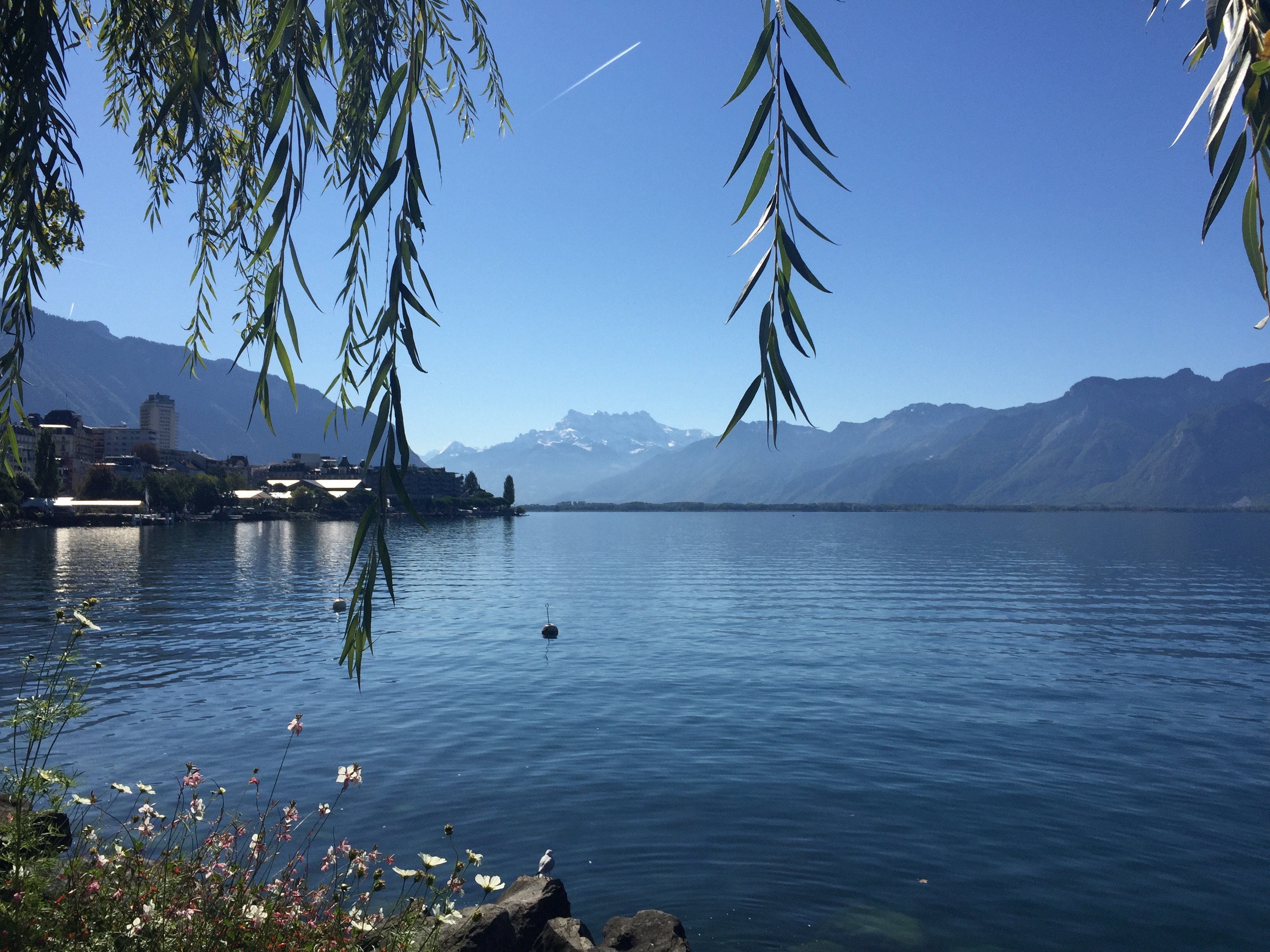 Karsten Königstein, MD, is a resident in paediatrics and sports medicine and currently working as post-doctoral candidate at the Department of Sports, Exercise and Health, University of Basel, Switzerland. He is a former competitive track-and-field athlete and currently engaged in coaching elite adult athletes and youth prospects. His research focus is vascular health and risk in children and adolescents, and he leads the regional affiliation of the Students & Junior Doctors SGSM/SSMS movement in Basel.

Justin Carrard is a second-year internal medicine resident based in Biel/Bienne (Switzerland). He coordinates the BJSM Swiss Junior Doctors and Undergraduate Perspective Blog Series and leads the Students & Junior Doctors SGSM/SSMS movement. Justin aims to raise SEM awareness among medical students and modern solutions it provides to big public health issues like non-communicable diseases. As an ex-competitive swimmer, he has a keen interest for endurance sports and regularly practices them with passion.