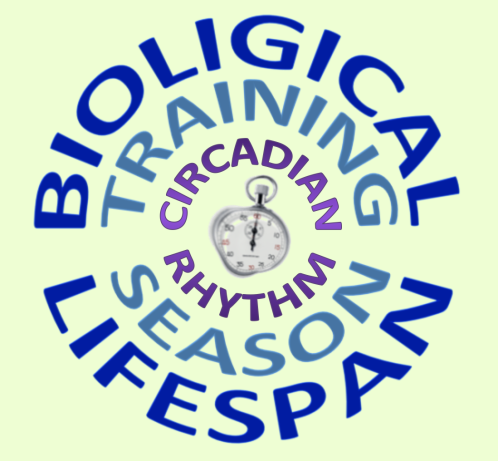 Amplitude and frequency of hormonal secretion display a variety of temporal patterns:

Hormones influence gene expression and hence protein synthesis over varying timescales outlined above. The control system for hormone release is based on interactive feedback loops. The hypothalamus is the neuroendocrine gatekeeper, which integrates external inputs and internal feedback.  The net result is to maintain intrinsic biological clocks, whilst orchestrating adaptations to internal perturbations stimulated by external factors such as sleep pattern, nutrition and exercise.

Circadian alignment refers to consistent temporal patterns of sleep, nutrition and physical activity. Circadian misalignment affects sleep-architecture and subsequently disturbs the interaction of metabolic and Endocrine health. This includes gut-peptides, glucose-insulin interaction, substrate oxidation, leptin & ghrelin concentrations and hypothalamic-pituitary-adrenal/gonadal-axes. The main stimuli for growth hormone release are sleep and exercise. Growth hormone is essential for supporting favourable body composition. These integrated patterns of environmental factors may have a more pronounced effect on those with a genetic predisposition or during crucial stages of lifespan. For example curtailed sleep during puberty can impact epigenetic factors such as telomere length and thus may predispose to metabolic disruption in later life. Regarding activity levels, there are strong relationships between time spent looking at screens and markers, such as insulin resistance, for risk of developing type 2 diabetes mellitus in children aged 9 to 10 years.

In addition to adverse metabolic effects set in motion by circadian misalignment, bone turnover has also shown to be impacted. Circadian disruption in young men resulted in uncoupling of bone turnover, with decreased formation and unchanged bone resorption as shown by monitoring bone markers. In other words a net negative effect on bone health, which was most pronounced in younger adult males compared with their older counterparts. These examples underline the importance of taking into account changes in endogenous temporal patterns during the lifespan and hence differing responses to external lifestyle changes.

For male and female athletes, integrated periodised training, nutrition and recovery has to be carefully planned over training seasons to support optimal adaptations in Endocrine and metabolic networks to improve performance. Training plans that do not balance these all these elements can result in underperformance, potentially relative energy deficiency in sport and consequences for health in both short and long term.

Part 2 will consider the longer term consequences and interactions of these temporal patterns of lifestyle factors, including seasonal training patterns in male and female athletes, on the intrinsic biochronometry controlling the Endocrine and metabolic networks during lifespan.

For further discussion on Health, Hormones and Human Performance, come to the BASEM annual conference

Sports Endocrinology – what does it have to do with performance? Dr N.Keay, British Journal of Sports Medicine 2017

Sleep Duration and Telomere Length in Children Journal of Paediatrics 2017

Clusters of Athletes – A follow on from RED-S blog series to put forward impact of RED-S on athlete underperformance Dr N. Keay, British Association of Sport and Exercise Medicine 2017

What are network meta-analyses (NMAs)? A primer with four tips for clinicians who read NMAs and who perform them (methods matter series)