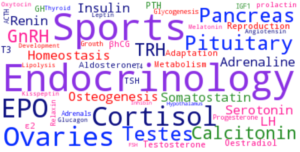 The Endocrine system comprises various glands distributed throughout the body that secrete hormones to circulate in the blood stream. These chemical messengers, have effects on a vast range of tissue types, organs and therefore regulate metabolic and physiological processes occurring in systems throughout the body.

The various hormones produced by the Endocrine system do not work in isolation; they have interactive network effects. The magnitude of influence of a hormone is largely determined by its circulating concentration. This in turn is regulated by feedback loops. For example, too much circulating hormone will have negative feedback effect causing the control-releasing system to down regulate, which will in turn bring the level of the circulating hormone back into range. Ovulation in the menstrual cycle is a rare example of a process induced by positive hormonal feedback.

In the control system of hormone release, there are interactions with other inputs in addition to the circulating concentration of the hormone. The hypothalamus (gland in the brain) is a key gateway in the neuro-endocrine system, coordinating inputs from many sources to regulate output of the pituitary gland, which produces the major stimulating hormones to act on the Endocrine glands throughout the body. 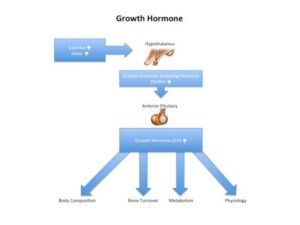 The Endocrine system displays complex dynamics. There are temporal variations in secretion of hormones both in the long term during an individual’s lifetime and on shorter timescales, as seen in the diurnal variation of some hormones such as cortisol, displaying a circadian rhythm of secretion. The most fascinating and complex control system is found in the hypothalamic-pituitary-ovarian axis. Variation in both frequency and amplitude of gonadotrophin releasing factor (GnRH) secretion from the hypothalamus dictates initiation of menarche and the subsequent distinct pattern of cyclical patterns of the sex steroids, oestrogen and progesterone.

So what have the Endocrine system and hormone production got to do with athletes and sport performance?

So the Endocrine system and the circulating hormones are key players not only in supporting health, but in determining sport performance in athletes.