“Health is a state of complete physical, mental and social well-being and not merely the absence of disease or infirmity”. – World Health Organisation 1948

There has been criticism of this definition, arguing that the word “complete” has opened the door to today’s more medicalised society. However, this trend coincides with increased volume of “patients” seeking optimal health, together with doctors who have a more extensive repertoire of medical interventions at their disposal. In a time-pressed society there is less opportunity for either patient or doctor to explore longer term adaptive measures and prevention strategies, which facilitate taking responsibility for your health. Fortunately Sport and Exercise Medicine became a recognised medical specialty in the UK in 2006. This encompasses population-based strategies for disease prevention outlined in the global initiative founded in 2007 “Exercise is Medicine“.

What has this got to do with sports performance? There are subgroups within the population, such as athletes already taking plenty of exercise. Elite athletes differ from the general population, due to superior adaptation processes to exercise, probably with a genetic component. So are the same “normal” population-based ranges of quantified medical parameters applicable? 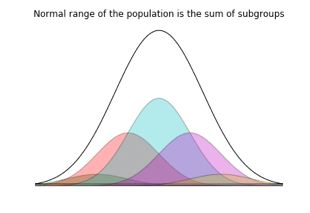 This is precisely the issue that arose when I was on the international medical research team investigating the development of a dope test for growth hormone (GH). Crucially, exercise is one of the major stimuli for growth hormone release from the anterior pituitary. So before we could even start investigating potential downstream markers of exogenous GH abuse, the “normal” range for elite athletes had to be established.

In a similar way, are the “normal” ranges for other hormones applicable to athletes? In a fascinating lecture delivered by Dr Kristien Boelaert, Consultant Endocrinologist, it was explained that the distribution for thyroid stimulating hormone (TSH) is affected by multiple factors, including illness, age and exercise status. So “normal” for the general population is not necessarily normal for specific subgroups.

The other issue, especially with the Endocrine system is that hormones act on a variety of tissues and so produce a variety of multi-system network effects with interactions and control feedback loops. Therefore symptoms of malfunction/maladaptation and subclinical conditions can be non specific. From a doctor’s perspective this makes Endocrinology fascinating detective work, but challenging when dealing with subgroups in the population who require a more intensive work-up and individualised approach.

The vast majority of research studies involve exclusively male athletes, leaving female athletes under-represented (a recent study on heat adaptation in female athletes being a notable exception). Some areas of research, including my own, have been directed more towards female athletes in the case of female athlete triad, or Relative Energy Deficiency in sports (REDs). REDs is a more appropriate term as it really sums up the important points: male and female can both be affected and therefore should both be studied. There are subgroups within the general population who may not fit the “normal” range: REDs is not necessarily a clinically defined eating disorder from lecture by Professor J. Sundgot-Borgen (IOC working group on female athlete triad and IOC working group on body composition, health and performance).

No medical/physiological/metabolic parameter can be considered in isolation: in the case of REDs, it is not menstrual disturbance and bone health that are affected in isolation. For example, there is currently great debate about whether a low carbohydrate/high fat diet (ketogenic diet) can mobilise fat oxidation and potentially be a training strategy to enhance performance. Needless to say that a recent study contained no female athletes. Given that many female endurance athletes are already lean, potentially driving fat metabolism through diet manipulation may have an impact on Endocrine function, optimal health and hence sport performance. I understand that a forthcoming study will include female athletes.

So a continuum or distinct subgroups in the population? Clearly general medical principles apply to all, with a spectrum from optimal functioning, subclinical conditions through to recognised disease state. We now have evidence of distinct differences between subgroups in the population and even within these subgroups such as male and female athletes. We are moving into a world of personalised medicine, where recommendations for optimal health are tailored for individuals within specific subgroups.

How should we define health?

Nobody is average but what to do about it? The challenge of individualized disease prevention based on genomics

Effect of adaptive responses to heat exposure on exercise performance