By Gerhard Ruedl and Martin Burtscher

It’s true that release bindings largely prevented tibia and ankle fractures, at least in adult skiers, knee injuries still represent the major injury type — about 1/3 of all ski injuries [1,2]. Female skiers have twice the knee injury risk and an about  three times the ACL rupture risk compared to males. Importanty, knee injured females still report an about 20 percent points higher failure of binding to release when compared to males [1,3]. 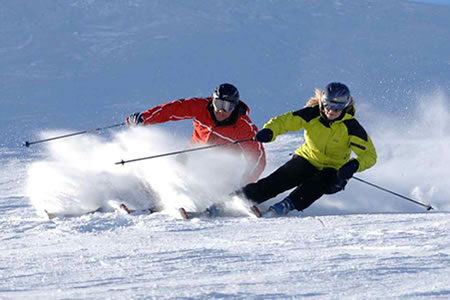 According to the official ski standards (ISO 11088 standard) [4] for binding values, skiers have to differentiate between skiing speed (slow to moderate vs. fast), terrain (gentle to moderate vs. steep) and skiing style (cautious vs. aggressive) to classify themselves into one out of three skiing types without considering any sex-specific differences.[4]

Assume a male and a female skier of equal age, height, and weight and of equal ski shoe sole length, and both classifying themselves as type-3 skier (fast speed, steep terrain, aggressive style). They both would get the same binding setting values without considering any sex factor. However, there are at least two potential sources of error which could represent an explanation for the higher number of failure of binding release among female skiers.

First, a recent study by Brunner et al.[5] found that males, more skilled skiers, and risky skiers perceived their actual speed as fast, moderate and slow when skiing up to 10 km/h  faster compared to females, less skilled and cautious skiers. Therefore, one might suspect that compared to a ‘slow to moderate’ or ‘fast’ male skier the binding setting for a ‘slow to moderate’ or ‘fast’ skiing female is too high resulting in a higher number of failure of binding release as sexes seem not to differ neither with regard to the date of last binding adjustment,[6] nor with regard to not correctly adjusted bindings,[7] nor with regard to self-reported types of falling in the case of an ACL injury.[1,6]

Second, a study by Werner and Willis[8] found that muscle strength is highly correlated with the ability to release the ski binding in a self-release test. Due to the equal weight of the male and female skier in the aforementioned example it has to be considered that the weight-to-strength ratio is negatively influenced by the higher fat mass in females[9] maybe partly explaining the sex difference in the lack of binding release due to less muscular strength among females.

Although the ISO 11088 standard[4] does not consider female sex, it is important to know, especially for female recreational skiers, that according to ISO 11088 standard point B.4 the binding setting may be lowered by 15% upon request of the skier in the following cases:

In a second study[11] we demonstrated that mean skiing speed (measured with a radar speed gun) of more than 2100 skiers and snowboarders is significantly lower among female compared to male skiers and snowboarders (40 vs. 47 km/h).  In addition, we interviewed a subgroup of about 550 skiers and snowboarders and divided these persons into a faster (59 km/h mean speed) and slower skiing group (36 km/h mean speed).[11] The slower group was independently associated with female sex, higher age, lower skill level, snowboarding (vs. skiing) and cautious behaviour.[11] In a third study we evaluated whether self-reported risk taking behaviour on ski slopes was associated with the personality trait sensation seeking.[12] Again, self-reported cautious behaviour was associated with female sex, higher age, lower skill level, and less mean score of Sensation Seeking.[12]

Taken together, our results clearly highlight that female sex is associated with a more cautious behaviour and a less mean skiing speed on ski slopes indicating that the terms “neutral skiing technique” and “defensive attitude” may especially apply to female skiers.

Therefore, keeping in mind the clearly higher failure of binding to release among female skiers suffering from knee injuries, a 15% lower ski binding setting would likely be appropriate for the majority of female recreational skiers.

Gerhard Ruedl  is a Senior Assistant Professor, Department of Sport Science, University of Innsbruck, Austria. His research interests include: risk factors (e.g. risk-taking behavior) leading to injuries and use of protective equipment (e.g. helmets) among alpine skiers and development of motor performance and weight status among school children

Martin Burtscher is a Full Professor at the Department of Sport Science, University of Innsbruck, Austria. His research interests include: exercise physiology with emphasis on mountain sports activities; physiological and pathophysiological effects of altitude and hypoxia; epidemiology and prevention of accidents and emergencies in skiing and mountaineering; life-style interventions in health and disease mainly focusing on exercise, environmental and nutritional aspects.