Last week we asked if the low carbohydrate, high fat (#LCHF) diet was a fad. This week, we’re at Cape Town to find out. Here are the highlights from the first day of the #LCHF conference. Also, check out our #LCHF Day 1 Storify. 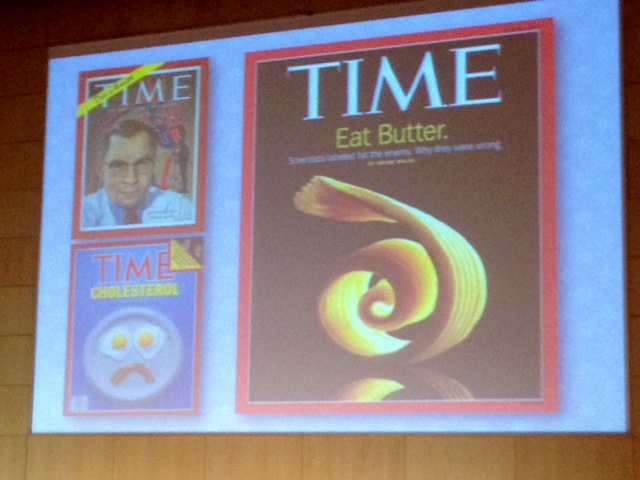 The opening keynote, Gary Taubes (@garytaubes), author of ‘Why We Get Fat’ and ‘Good Calories, Bad Calories’ questioned the cause for people to overeat. Taubes uprooted the current energy balance hypothesis where, ‘too much eating and too little physical activity causes people to overeat’. He planted his alternate hypothesis: ‘obesity is a disorder driven fundamentally by insulin and dietary carbohydrates’. Taubes proposed his solution, ‘to restrict the causative agent i.e. refined grains and sugars’.

Obesity researcher, Zoe Harcombe (@zoeharcombe), studied the evidence behind the national dietary fat guidelines introduced over 30 years ago in the UK and US, and found that they were not supported by the RCTs. She proposed what we really should eat: real foods and mostly animals.

Christine Cronau (@ChristineCronau) talked about the fat revolution and the diet results. She explained that those who eat the most saturated fat have the healthiest bowels. Cronau questioned how food is processed (acid forming or alkalising) in the body.

A long standing advocate in the #LCHF diet, Dr Michael Eades (@DrEades), thrashes the evidence for a low-fat diet up against the low-carb diet, and explained how he tweaked existing commercial diets to power a low carbohydrate diet for his patients. Are individualised diets the way forward?

An invitation to constructive debate

The #LCHF convention is an opportunity for both nutrition and scientific experts to showcase their research and enrich the debate. We look forward to new research questions, and extending existing hypotheses.

Tomorrow, we look forward to hearing from the #LCHF experts on the treatment of obesity, metabolic syndrome, type 2 diabetes, mental health, bariatric surgery and the lipid hypothesis.

Reminder: Sunday 22nd February is open to the public – voice your opinion! Or, tweet @BJSMPlus and we’ll do it for you!