A month is a long time in football 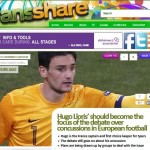 On November 21st, I was one of three sports physicians who wrote a Blog at BJSM on the topic of concussions in football & managerial interference in medical decisions. I tried to assess the risks involved for all of the participants in the Hugo Lloris concussion incident. Perhaps controversially, I estimated that the (then) Tottenham manager, Andre Villas-Boas, had between a 1 in 3 and 1 in 5 chance of being sacked this season. Well as it turns out if I had have offered to hold bets at these apparently meagre odds I would have been taken to the cleaners, as he didn’t survive the calendar year, let alone the remainder of the football season.

Which begs the question, why should someone (an EPL manager) with a job expectancy of roughly a year – give or take – have any role in decisions which may have an impact on the health of the player 20 years down the track? The answer is that of course they shouldn’t, but of course they do. If there was one thing that AVB made very clear in his short tenure, it was that he and he alone decided when players were substituted off the field. Other managers have said that they respect the opinion of their medical staff, but those at the coalface know of pressure to not be “too conservative” in a cut-throat world with limited substitutions.

It’s not surprising that a manager would put ‘team performance’ ahead of ‘long-term player welfare’. (We are not pointing any fingers – we are just drawing a logical conclusion).

Did AVB’s stance on concussion have a role in his downfall? I suspect not; my experience in professional sport is that managers are judged primarily on (poor) results. If Tottenham were leading the EPL then he would have been getting praised for being a strong leader who made tough decisions. Since my November blog, the Australian cricket coach Darren Lehmann has talked about batting on after being knocked unconscious by a ball the first time he batted at the WACA. No one talked about this being an inappropriate thing to say, possibly because cricket has fewer incidences of concussion but – more pragmatically – because coaches are fair game for criticism when they are losing but almost immune to criticism when they are winning. Darren Lehmann has just presided over a 3-0 Ashes win for Australia that – like AVB getting the sack – would have seemed impossible a month ago.

The ‘must win’ culture for coaches is unfair

The deal which coaches get – “win or else” – is unfair, but all in sport need to understand this deal and then question whether those under such ridiculous pressure to win should have the health and welfare of players in their hands? How can AVB be asked to think about Hugo Lloris’ health 20 years hence when the coach might only be in the job another month? Given the manager is NOT well placed to consider a player’s long-term health, how are sports administrators redressing the imbalance of power on match day between the coaching and medical staff? Note that the NFL paid out close to 800 million $US to football players who felt their long-term health was not a club priority during their playing years. NHL players are now seeking a similar payout. (Of course the NFL did not acknowledge ‘guilt’ of any kind).

Is there time for doctors to make an accurate concussion diagnosis pitchside?

A further development from my Blog, but relating to a different game (i.e. NOT the Tottenham doctors) is that a team doctor who has been accused – by the press – of allowing a concussed player to stay on the field wrote to say that in the incident in question he didn’t believe the player to have been concussed (despite what the press wrote). He admitted that the rules of football meant that his assessment was unfortunately a brief one on the pitch and that he supported a rule where he could more thoroughly assess the player on the sideline. Rugby Union has introduced Pitchside Concussion Medical Assessment. Doctors are thus under conflicting pressure from their teams (to err on the side of leaving the player on the field) and their medical colleagues (to err on the side of taking the player off, permanently if this is all the rules allow). It is a hard time to be a team doctor.

Legislate to be allow doctors to make additional concussion assessments and require player substitution as needed.

The bottom line is that in almost every professional sport the decisions on which players to substitute are primarily controlled by coaching staff who are forced by the nature of the job to think in the short term. Witness AVB’s sacking. Doctors are in a position to think longer term with respect to a player’s health later in life. The rules of sport need to change to allow doctors to have the power to make (additional) assessments and substitutes in the case of potentially concussed players.