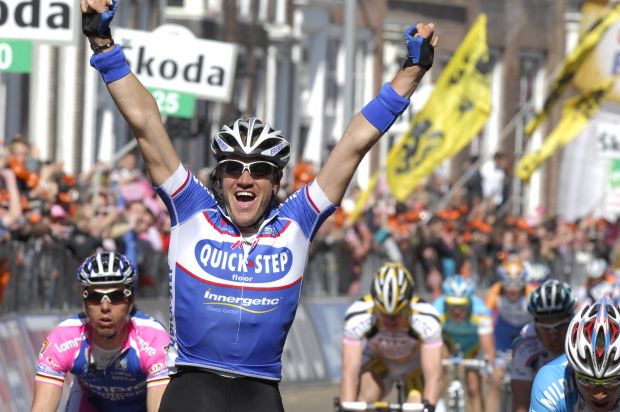 Most of us were dramatically shocked while watching the live broadcast of Wouter Weylandt’s death following a horrific crash on the third stage of the Tour of Italy. While travelling at high speed negotiating a descent, the left pedal of the Belgian rider’s cycle briefly touched a wall at the side of the road. This propelled him 20 metres to the ground below, where he landed heavily on his face. He died nearly instantly from fatal skull and facial injuries. There was also reported damage to his neck, pelvis and a broken leg. Regrettably, this was not an isolated incident. Two days after Weylandt’s accident, during the fifth stage of the Tour, Tom-Jelte Slagter crashed his face on gravel. He suffered a broken right eye socket (orbit) and head concussion. He fortunately survived the crash with no residual brain damage. Nevertheless, these two consecutive crash injuries raise a reasonable doubt: what can be done to prevent such dramatic road cycling injuries? 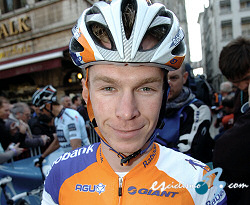 Sport safety is long debated, and progressed across most fields, especially motor racing.1 However, cycling accidents, especially those resulting in head injuries, remain a substantive cause of disability and death. Mandatory helmet use in elite cycling, devised by the International Cycling Union (ICU) in 2003, has probably prevented a huge amount of deaths or disabilities after head injuries.2 Still, the helmet was not sufficient to save Weylandt, nor was it effective in protecting Slagter’s face. As such, extra efforts are necessary to identify additional means to safeguard cyclists.

The first important aspect of cycling safety is an evaluation of accident dynamics. Both aforementioned riders crashed their face heavily on the gravel. The current cycling “open” helmets, even when appropriately worn, do not assure any kind of protection for this type of crash. A Cochrane meta-analysis – including five well conducted case-control studies – showed that the use of traditional cycling helmets reduces injuries to the upper and mid facial areas by 65%, although is not effective to prevent lower facial injuries.3 In a prospective study on cyclists with maxillofacial injuries, Harrison et al also reported that the currently accepted design for cycle safety helmets does not provide any protection – directly or indirectly – against maxillofacial fractures. The authors conclude that significant reduction in morbidity might be achieved by protecting the upper and middle facial regions.4 From this perspective, the use of “full,” “closed” or full-face motocross-type helmets (i.e. integrated with visor, brim or face shield) may have substantially mitigated the severity of the orofacial trauma in both accidents. Whilst understandable that the latter type of protection would be awkward for the athletes, the undeniable benefit of face protection may outweigh ergonomics. Especially considering the dramatic consequences of these two crashes.

“Full” helmets (i.e., time trial helmets) are already used widely by the athletes to achieve the lowest aerodynamic resistance. Also, motocross-type helmets are commonplace in cross-country cycling. Along with more protective helmets, efficient shielding measures for other commonly and severely traumatised body parts (e.g., neck, limb, and legs), might be proposed (e.g., knee and elbow pads, neck protections). While the direct introduction of the HANS carbon fibre collar seems unsuitable in this type of sport, neck braces can be reengineered to fulfil the requirements of road cyclists. This has potential to prevent occipitoatlantal dislocation and acute neurogenic shock, another common injury in road cyclists, 5 also suffered by Weylandt in his fall. 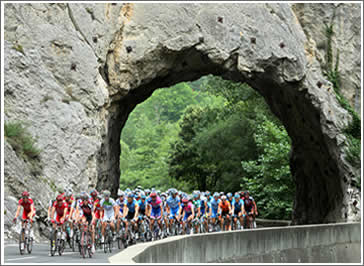 The second aspect for consideration is the race contest. Since the road is and will obviously remain the natural playground for cycling competitions, we introduce more efficient protective measures alongside the route. The road surface should be in the best possible condition. This includes building with materials less prone to slickness in precipitation and softness in hot weather. Also, pre-race course rehabilitation is important to eliminate holes, cracks and bumps. Introduction of permeable paving might also be advisable to prevent slippery surfaces during rainy weather. The passage on zebra crossings built with slippery paint should be avoided, whenever possible. Additional considerations are temporary crash protection barriers made of foam pads throughout the most dangerous parts of the route.  These may absorb the crash energy and prevent athletes from bouncing heavily onto the gravel. Although it is understandable that modification of cycling routes as long as 3500 km (i.e., the three national big tours) would be extremely expensive, some of these solutions might help to consistently reduce the severity of such road injuries. Changing the route (e.g., eliminating the descents) may instead be unrealistic. Most cycling competitions develop through ascents and descents – some of which have made the history of this sport (e.g., Colle de Tourmalet,  Alpe d’Huez, Passo del Mortirolo, Passo dello Stelvio, Alto de El Angliru, etc.) – so that the elimination of the descents would pervert the nature of competitive cycling.

The role of medical assistance and working groups

Reviewing the accidents in discussion, no extra medical assistance could have been contributed to that already provided in the Tour of Italy. Unfortunately, Weylandt died immediately after the crash and – even if this was not the case – there is minimal treatment for that kind of head injury outside a hospital or neurosurgery department setting. Slagter was immediately and efficiently assisted after the crash (i.e., within 30 sec), which confirms that medical assistance is already suitable.

Recently, the cycling authorities’ have raised concerns about additional issues such as the use of earpieces. From their perspective, earpieces distort the nature of the sport and distract the athletes from riding the bike. Based on review considerations from a working group established in 2008, earpieces were banned in some competitions in order to make cycling races more exciting and safe. Accordingly, it is advisable that an international working group, most likely under the auspices of the UCI, be formed to study new technologies and methods; increase safety in cycling races; and discuss and evaluate roadside hazards. Finally, race organizations should be prepared to permit additional forms of communication to inform cyclists about potential dangers of this sport.

Summary of Traumatic Injuries in Cycling

Maxillofacial traumas include any injury to the bony structure, surrounding tissue, nerves, or vascular supply of the face. Although this type of injury is rarely life-threatening, it is frequently associated with bone fractures (i.e., mandibular, zygomatic and orbital), esthetical disturbances, permanent facial dysfunction, airway and breathing problems, haemorrhages as well as brain contusion and cerebral damage; the vast majority of cases require hospitalization and surgical intervention.6-9 The incidence and severity of head injury is strongly related to the zone of impact, being typically associated with Le Fort III fractures (i.e., extending across the zygomatic arches and lateral and medial orbits connecting along the inferior orbits below the optic nerves, joining in the midline at the nasal root), or traumas to the upper third of the face – namely the temporal and frontal regions.4

Orofacial injuries represent the most common type of trauma in road cyclists.0 Nearly one fifth of all these injuries observed at the emergency department are due to accidental bicycle falls.7,10 Moreover, the sport of cycling contributes to a large number (up to 45%) of these traumas among all sport disciplines.8,11 Cyclists with head and face trauma might also frequently present with traumatic brain injuries (14.4% of cases), intracranial injuries (3.9%) and concomitant neck injuries (9.7%).12

The Corresponding  Author has the right to grant on behalf of all authors and does grant on behalf of all authors, an exclusive licence (or non-exclusive for government employees) on a worldwide basis to the BMJ Group and co-owners or contracting owning societies (where published by the BMJ Group on their behalf), and its Licensees to permit this article (if accepted) to be published in British Journal of Sports Medicine and any other BMJ Group products and to exploit all subsidiary rights, as set out in our licence.

What is already known on this topic

What this study adds