Continuing my search for biomedical black swans, based on the words newly cited in the Oxford English Dictionary (OED) from 1970 to 2020, I now turn to terms relevant to biochemistry, of which I have surveyed 140 or so. About 90% derive from Greek or Latin, in some cases as hybrids, Greek outnumbering Latin by about 2:1. Most of the rest are abridgements of one sort or another and three are eponyms or toponyms. One is from Hebrew.

Table 1. Biochemical terms derived by abridgement since 1970, with dates of first citations in the OED 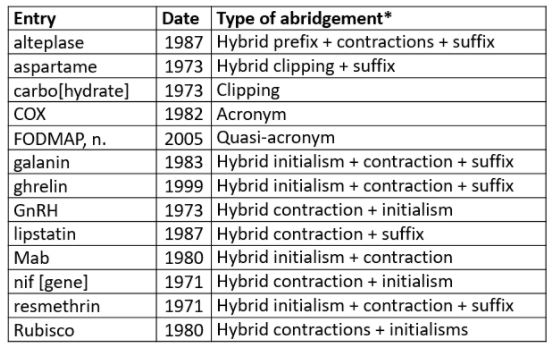 *There are several different types of abridgement:

There is an unusual number of hybrid forms among these abridgements, but perhaps the most unusual is ghrelin, the name that in 1999 Kojima and colleagues gave to a peptide hormone that stimulates secretion of growth hormone from the pituitary and increases appetite. They derived the name from the initialism GH, for growth hormone, the contraction rel– from releasing, and the general suffix –in, commonly given to endogenous substances. Small synthetic molecules called growth-hormone secretagogues (GHSs) were known to stimulate release of growth hormone from the pituitary, acting through a G-protein-coupled receptor, GHS-R, thought to have an endogenous ligand not yet identified. They therefore sought such a ligand and found it in rat stomachs. They identified it as a peptide of 28 amino acids and showed that the acylated peptide specifically released growth hormone, both in vivo and in vitro, and that human ghrelin was homologous with rat ghrelin, apart from two amino acids. They concluded that release of growth hormone from the pituitary might be regulated not only by hypothalamic growth hormone releasing hormone (GHRH), but also by ghrelin. “Ghrelin” also gives us hypoghrelinaemia, ghrelino-resistance, ghrelinoma, and ghretropins.

Then, almost as an afterthought, they added an etymology to the abstract of their paper. The combination ghr– at the start of a word is rare; an exception is “ghrosky”, a hairy troll (use it the next time you’re intemperately attacked on Twitter). They therefore justified the coinage by recourse to an IndoEuropean root GHRE, which means to grow, and from which we derive words such as grow and growth, green, grass, and grasshopper, a name that has been given not only to the familiar insect but also to a delicious green-coloured cocktail made from one-third green crème de menthe, one third white crème de cacao, and one third cream.

Like many other biomedical discoveries that are marked by the appearance in the dictionary of the terms that describe them, ghrelin was discovered through a logical process of planned experiments, in which black swans did not feature.

In 1987 Michael Zasloff in Bethesda noticed that when ovaries were removed under non-sterile conditions from anaesthetized African clawed toads Xenopus laevis, the wounds rarely became infected and the scars almost always healed normally. Furthermore, there was little evidence of inflammation or other cellular reactions at operative sites. “The manner in which wound healing occurs in this animal,” he wrote, “suggested that there might be a ‘sterilizing’ activity in the skin.” This chance observation led him to look for substances that might have such activity, and he discovered a family of antimicrobial peptides in purified Xenopus laevis skin. He hypothesized that they constituted a previously unrecognized antimicrobial defence system. It appears that these peptides not only protect against invasion by micro-organisms, but also neutralize endotoxins and encourage chemotaxis and wound healing.

Zasloff called the peptides magainins, from the Hebrew word magen, a shield (Figure 1). It comes from the triliteral Semitic root GNN, which means to cover or surround and which also gives us the word genie, from jinn, an Arabic word for an order of demons or invisible beings. 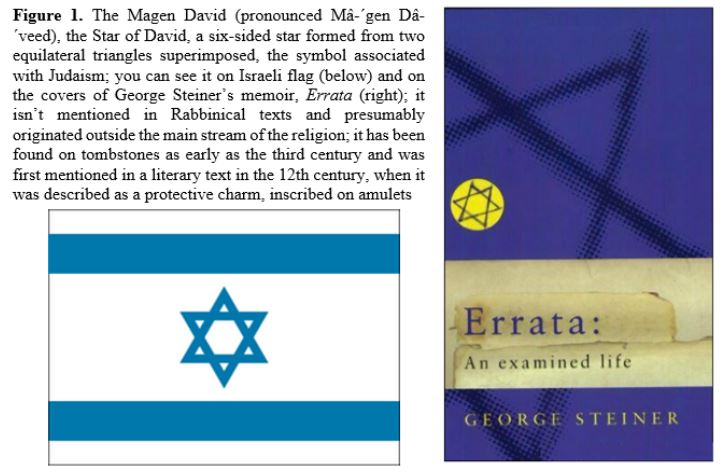 Magainins are true black swans., discovered by acute observation of an unexpected finding. But perhaps, since they were discovered in the skin of Xenopus toads, we should take a leaf out of Juvenal’s second satire and instead call them ranas nigras, black frogs.