Continuing my search for biomedical black swans, based on the words newly cited in the Oxford English Dictionary (OED) from 1970 to 2020, I now turn to terms relevant to microbiology and infectious diseases. Of 90 terms I’ve surveyed, 52% describe viruses and viral diseases and 18% bacteria and bacterial diseases. The names of the bacteria are derived about equally from Latin and Greek words, whereas about one third of the names of the viruses are purely Latin in origin, and about one quarter are abbreviations; seven have combined Latin and Greek origins and seven are toponyms (Table 1).

Toponymic nomenclature of infections and infectious organisms has been criticized recently, because of pejorative or accusatory uses, as if the rise of the infection was the fault of those who live in the area after which the causative organism was named. Toponymic infections include Bornholm disease and Marburg disease, but the best known is the Spanish flu, the 1918–20 influenza pandemic. It was so called, not because it was first observed in Spain, which is the usual toponymic justification, but because, in the absence of war-time press censorship, the Spanish newspapers provided extensive coverage of the pandemic.

Now the variant of SARS-CoV2 previously called the Indian variant, also known less memorably as B.1.617.2, is to be called the delta variant, to avoid any implication that India was responsible for it. The Greek alphabet has 24 characters, from alpha to omega, but there are three others, present in early scripts but obsolete in Attic times, known collectively as episema (singular episemon)—a word that surprisingly has not made it into the OED. The letters were called digamma, koppa, and san or sampi, and they were retained in Attic Greek to symbolize numerals, since 27 letters are needed to cover all the integers from 1 to 999 (Table 2).

Table 2. The 27 letters of the Greek alphabet used to represent numerals 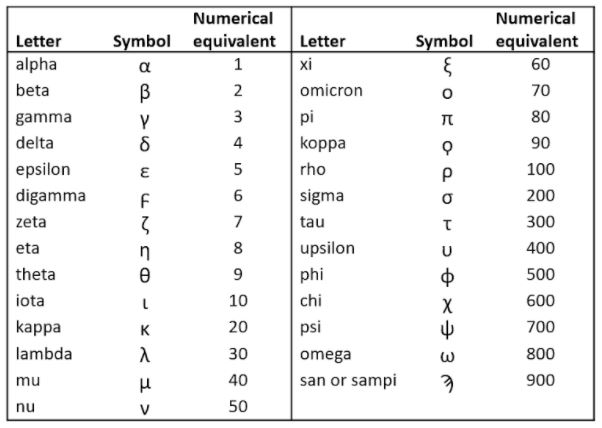 The digamma, which sounded like a vee or ef, can be seen in some Latin words that came from Greek before the digamma was dropped. Take the Attic Greek word for a ship, ναῦς (naus), from which we get nautical; in Latin it was navis, which gives us navigate. The Greek word for a key was κλείς (kleis), from which we get the musical instrument the ophicleide; in Latin it was clavis, which gives us a different instrument, the clavichord. In Greek, wine was οἶνος (oinos), but in Latin vinum, giving us wine, vine, vinegar, viniculture, vintage, and vinyl—the radical isomeric with ethenyl. In all these cases Latin retained the digamma, converting it to a vee.

The episema are unlikely to be harnessed to designate the 25th to 27th variants of SARS-CoV2, when they emerge. Perhaps Oxford’s way of grading students’ work will prove useful, with marks such as alpha, beta-plus, and, for finer distinctions, alpha-beta-double-plus-minus.

So what about the microbiological black swans? The antibiotic action of penicillin undoubtedly qualifies. But its isolation from a Penicillium mould by Florey. Chain, and Heatley was a planned effort, and thereafter antibacterial drugs were specifically sought, starting with the Actinomycetes, soil organisms in which Selman Waksman discovered streptomycin and from which many other antibacterial agents were later isolated.

The death on 16 April of the pharmacologist Ronnie Cresswell also reminds us of the discovery of azidothymidine (AZT), later called zidovudine, the first effective specific treatment for HIV AIDS. It had been synthesized in 1964 by Jerome Horwitz at the Michigan Cancer Foundation, who had hoped to use it as an antimetabolite in leukaemia. It didn’t prove useful, but in 1974 Wolfram Ostertag in the Max Planck Institute in Göttingen showed that it inhibited replication of a leukaemia retrovirus. So when Cresswell, leading drug development at Burroughs Wellcome, wanted to find a drug to inhibit the growth of HIV in vitro, his colleagues screened a range of compounds against other retroviruses, and there was AZT. A nucleoside chemist at Wellcome, Jane Rideout, chose it as one of a range of 14 different compounds, and her virologist colleague, Martha St Clair, did the screening. If that was a black swan, it took a long time to come out of hiding. Perhaps we can regard it as dark grey.

Infections are not black swans, in the sense of discoveries that are made unexpectedly. Rather they discover us, as it were, not we them. It is as if the black swan has suddenly decided to show itself. Perhaps we should call them ugly ducklings.