When Médecins Sans Frontières/Doctors Without Borders (MSF) first launched a mobile clinic project to respond to the critical need for primary healthcare and mental health services in the conflict affected areas of eastern Ukraine’s Donetsk region, we weren’t expecting to run a geriatric programme.

Now, five years into the conflict, 88% of our patients are over the age of 50, and we are working to adjust our project model to meet the particular health needs of this group through age and gender sensitive programming.

Ukraine, which has the highest proportion of elderly people affected out of any conflict in the world, may be an extreme case, but in all emergencies older people have characteristics that make them particularly vulnerable. It is our hope that by drawing attention to the trends seen in Ukraine, we can illuminate the need for greater support and consideration for the vulnerabilities of elderly people in humanitarian crises across the world.

During active armed conflict and natural disasters, elderly people, like people with physical disabilities, have the disadvantage of limited mobility, impairing their ability to seek shelter and safety. In Ukraine, large numbers of people have fled the areas most affected by fighting. Younger people in particular have left villages near the contact line in search of safety, healthcare, employment, education, and social services elsewhere. Those who have stayed face the emotional and physical difficulties of living in near isolation. Considering the current demographics of the areas most affected by the conflict, it is no surprise that the majority of MSF’s patients in eastern Ukraine (88%) are over the age of 50.

Disrupted healthcare means an interruption of care for chronic conditions

Older people are more likely to suffer from chronic conditions that require uninterrupted care and follow-up. In contexts of armed conflict and natural disasters, all too often health infrastructure is affected, healthcare providers flee to safety, and there is a breakdown in the supply of medicines. Patients with chronic conditions often remain stranded, without medications or follow-up care. As a result, their conditions may worsen and life threatening complications may develop.

At its height, MSF’s mobile clinic project in Donetsk region had an active cohort of around 3000 patients, the majority with chronic conditions, most commonly hypertension (82% of patients), cardiovascular disorders (63% of patients), and diabetes (25% of patients).

Rural communities, where elderly people are more likely to live, are particularly affected

Despite rapid urbanisation globally, more than 60% of older people live in rural communities. People’s livelihoods in rural communities, in Ukraine and elsewhere, are heavily dependent on agriculture, farming, and livestock—resources which are often destroyed in times of conflict. Additionally, Ukraine is one of the most mine affected countries in the world, with more than 1000 mine related casualties recorded since 2014. The presence of landmines further restricts people’s access to farms, leaving them unable to cultivate crops or tend livestock.

This also has a profound impact on people’s access to healthy nutrition—especially important for older people, who may have dietary restrictions due to chronic medical conditions and dental problems. More than one million people in eastern Ukraine do not have regular access to food and are in need of livelihood support.

The conflict in Ukraine has also disrupted basic services such as water, gas, electricity, telecommunications, and transportation, especially in rural communities near the conflict zone. Some 3.6 million people in eastern Ukraine have problems accessing water, as the water supply system is regularly damaged by shelling. Residents of rural communities also experience difficulties due to their physical isolation. Unable to reach facilities on the other side of the contact line, they often have to travel for hours by erratic public transport in order to buy medicines and other necessities.

Elderly women are impacted by the gender gap

Life expectancy for men and women is typically different, in most countries varying by a few years. In Ukraine, there is a 10 year gap between male and female life expectancy, at 67 and 77 years, respectively, resulting in many more elderly women than elderly men. Not surprisingly, 76% of MSF’s mobile clinic patients are female.

Women have specific health, hygiene, and physiological needs that entitle them to special protection under humanitarian law. Women in Ukraine also have significant social vulnerabilities, particularly in the areas of economic participation and opportunity, health and survival, and political empowerment. Ukraine ranks 65th in the world for gender parity, according to the 2018 Global Gender Gap Index, compared to 56th in 2014.

Still, greater efforts need to be made throughout the humanitarian community to recognise the particular needs of older people and those with disabilities in contexts of complex emergencies. This can be done by proactively looking for people who cannot independently seek and access medical assistance.

Humanitarians have traditionally focused their efforts on affected communities that have sought assistance and protection, such as displaced populations. However, it is also necessary to reflect on the needs of those who stay behind in dire conditions. Our experience in Ukraine reaffirms that those who stay behind are more likely to be older, female, at a high probability of suffering chronic health conditions and/or disability, and living in rural environments. 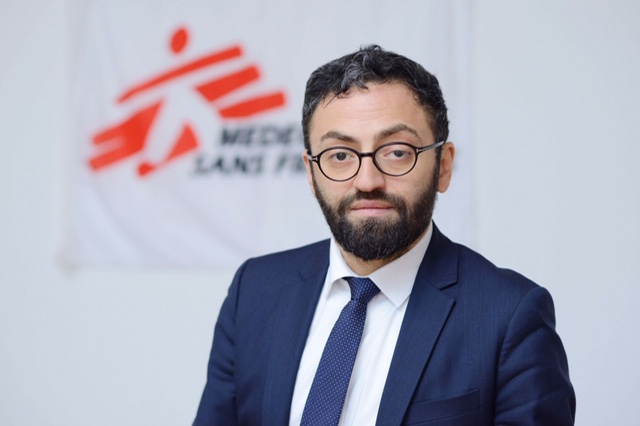 Grigor Simonyan has worked in the humanitarian field for over 14 years with Caritas, Catholic Relief Services, Mercy Corps, and MSF. Since 2012, he has been country director with MSF in Kyrgyzstan, South Sudan, India, and presently Ukraine (since 2018).