I was first diagnosed with breast cancer in February 2007 and since then I have had many rounds of chemotherapy. I am currently attending a chemotherapy unit every three weeks. The treatment I am having is given intravenously through my portacath (a permanent indwelling IV line). I do experience side effects, but these are not as bad as I have experienced with previous treatment.

Last week, a patient’s relative thought that I was a “newby” after someone helped me to get a paper towel to wipe up my spilt cup of tea. I was tethered, as usual to the IV, but was being lazy, not unplugging the monitor, and stretching to reach the paper towel which I failed to do, so she kindly helped. Normally I whizz around to the loo with ease after five years of training with the monitor I use it like a partner in a waltz (move over Strictly!). I overheard another patient next to her say “she’s on her EIGHTY SEVENTH treatment!” with the woman repeating “EIGHTY SEVENTH???”

I sat as usual having my treatment, working, and talking to the nurses as they put the different drips up, saline, perjeta, saline, herceptin, saline. It takes time, but I am usually out of the unit in around 2.5 hours if I’m lucky…

It was the first time that I had been on this unit when three people had just finished their treatment.  I remember thinking it’s a great feeling to finish after crossing off the dates of my six chemos 12 years ago. I remember thanking the nurses, bringing them in some treats and a card to say thank you, and saying: “I don’t want to ever see you again [in a nice way] haha” to them.

And then, there it was, the end of treatment bell. It seems a modern-day phenomenon that everything has to be celebrated loudly and brashly. I believe this new way of celebrating finishing chemotherapy arrived from the USA. These bells are generally like a ships bell or a school bell. They are either mounted on the wall, usually with a rainbow to signify that patients are now at the end of the rainbow and have the pot of gold, i.e. health, recovery, and being “cancer free.” Or they are like a school bell that you pick up and ring. It is either bought by the hospital ward using donations or patients buy the bell as some people like them.

For those of us living with recurrent cancer who have little prospect of being cured, hearing this bell being rung is like a kick in the teeth every time I hear it. I heard it rung three times last week.  I sat and videoed my foot nervously waggling as I do when something is on my mind.

Many patients who have been newly diagnosed with breast cancer and undergoing potentially curative treatment have no idea that overtly celebrating the end of their treatment in this way is so profoundly upsetting for other fellow patients. Modern science has helped many of us to live longer, but in the case of breast cancer there is a risk of recurrence. We know that of those early stage primary patients approximately 30% will “at some point” develop secondary breast cancer and that risk can be up to 20 years for some types of breast cancer.

My impression, from when I have posted my concern about end of treatment bells on social media is that many have clearly never thought of this. I have had many discussions and twitter rants about it.

Living with recurrent breast cancer is hard. It feels as if the disease has one aim—it wants to kill the person it’s growing in. For those who are shouldering this burden it’s important that we avoid adding to it. I am sure that I am not the only person who has heard the end of treatment bell and left the unit in despair, weeping on the way home from treatment which we know will not cure us.

While it’s good to celebrate—and I did when I finished treatment for my  primary cancer—they didn’t have a bell then. Even if they had had one I wouldn’t have rung it. As a friend said, she actually felt like she was tempting fate by ringing the bell. Nevertheless, it’s now been adopted by many chemo units and radiotherapy departments.

And it’s not the patients’ fault, but people do need to be made aware that others may find it insensitive. My lovely nurse was uncomfortable, he glanced at me twice when they were performing the ceremony of ringing the bell. People think it’s an encouraging thing to have a bell. I disagree, I think it’s divisive and cruel. For me, it just reminds me of my own mortality and that I will never get to ring it because I will never finish treatment.

There are many other patients like me out there and it’s surely time for chemotherapy and radiotherapy units who use these bells to rethink whether they are really a good idea.

Many people additionally don’t like the “fight” analogy. The bell being rung is like the end of a round in a boxing match. But who wants another round? I’m sure no one does. Perhaps I should ring it to count the number of times I’ve had treatment, but I would be there for a while and probably people would get sick of it then and want it stopped. Maybe we should just call time on the bell for all the reasons I have mentioned above, but I’ll ring it as many times as you want if we get a cure—for everyone. 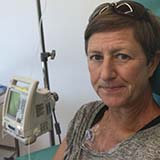