As I discussed last week, skills and knowledge constitute the art and science of medicine. To these the General Medical Council, in the first domain in its document Working with Doctors; Working for Patients, adds “performance”. This suggests a modern reworking of an ancient construct, the trivium (implying eloquence) and the quadrivium (implying knowledge).

The word “art” has diverse meanings. Among them, the plural form “arts” was very early on (the first example in the Oxford English Dictionary dates from 1300) used to describe the seven subjects formed by combining the ancient trivium and quadrivium (Box). These subjects, outlined by Plato in The Republic, gave an excellent educational grounding for the study of philosophy and practical subjects, such as medicine and architecture. Later, the terms “free arts” and “liberal arts” were used instead, conveying, in the words of the OED, “the idea that these were the subjects of study considered worthy of a free man”. Today, universities confer the degrees of Bachelor or Master of Arts on graduates in any subject, including sciences.

I have in mind a modern trivium and quadrivium, to some extent reorganising the ancient ones. The modern quadrivium combines general literacy (reading and writing); numeracy (mathematics); oracy, the ability to speak and communicate clearly; and computeracy. The modern trivium combines skills, knowledge, and performance in any specialised field of study and practice (Box). I have previously discussed skills and knowledge.

The word “perform” comes from the IndoEuropean root MERBH, to shine. MERBH gives the name Morpho to a genus of nymphalid butterflies with shiny blue wings. And because anything that shines can easily be seen, MERBH also came to mean to appear or take shape. The Greek word μορϕή, form, gives us allomorph, amorphous, morphology, and metamorphosis. Morpheus, the Greek god of sleep, who gives us our name for morphine, conjured shapes in men’s minds while they slept. Anamorphosis is a distorted projection or drawing, most famously seen in the skull at the foot of Hans Holbein’s portrait The Ambassadors (picture). James Murray, the first editor of the OED, referred to this picture in an article in the Mill Hill Magazine in 1876, describing the skull as “anamorphosed”; when he included the verb “anamorphose” as a back formation in the first fascicle of the OED (1884), the only example he could find was in his own article, which he therefore cited. 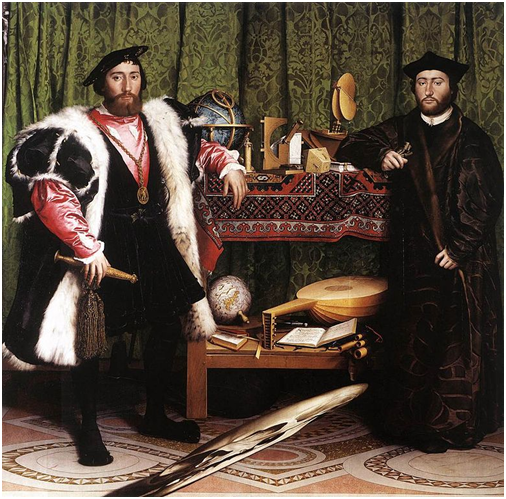 Double Portrait of Jean de Dinteville, the Bailly of Troyes and Georges de Selve, Bishop of Lavaur, better known as The Ambassadors (1533), by Hans Holbein the Younger. For a detailed discussion of the objects in the painting see Hervey MFS. Holbein’s “Ambassadors”: The Picture and the Men. An Historical Study. London: G Bell & Sons, 1900, and Dekker E, Lippincott K. The scientific instruments in Holbein’s Ambassadors: a re-examination. J Warburg Courtauld Inst 1999; 62: 93-125.

The goddess Aphrodite was supposedly named from aphros, the foam of the sea, whence she was born, as Botticelli (The Birth of Venus, 1485) and Titian (Venus Anadyomene, 1525), among others, depicted. But “Aphro” also looks like Morpho metathesised, and Morpho is what the Spartans called the shapely Aphrodite.

Metathesis morphed the Greek “morph” into the Latin “forma”, appearance or beauty, and its diminutive, “formula”, shape. Formosus meant full of shape and therefore beautiful; “Insula Formosa” was the original Portuguese name for Taiwan. Forma also gives us form and format, conform, deform, inform, platform, proforma, reform, transform, uniform, the vermiform appendix, and of course perform. In Latin, formare meant to give shape to something and the postclassical addition of the prefix per-, with the connotation of thoroughness or completion, gave performare, to give a definitive shape to, and therefore to carry out an action.

The GMC doesn’t explicitly define “performance”, a potentially ambiguous term, since it can be good or bad. However, paragraphs 7–13 in Domain 1, “Develop and maintain your professional performance”, state that “You must be competent in all aspects of your work, including management, research and teaching, … keep your professional knowledge and skills up to date, … regularly take part in activities that maintain and develop your competence and performance, … be willing to find and take part in structured support opportunities offered by your employer or contracting body, … be familiar with guidelines and developments that affect your work, … keep up to date with, and follow, the law, our guidance and other regulations relevant to your work, … [and] take steps to monitor and improve the quality of your work.”

Presumably, all of these things constitute “performance”, the things one is expected to do and at which one is expected to be competent. The OED defines competence as “Sufficiency of qualification; capacity to deal adequately with a subject”.