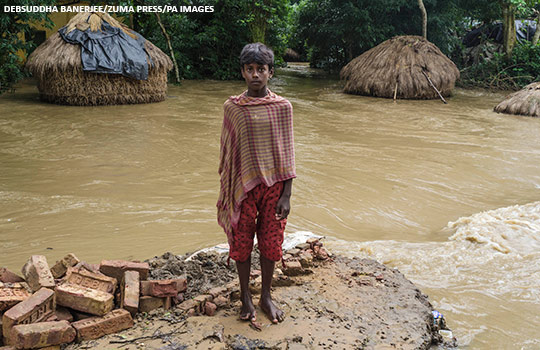 Nearly all Indian towns and cities exist in a paradox: they are water scarce in dry seasons, yet prone to severe flooding during monsoons. Earlier this summer, the entire area of south India was parched, putting pressure on already dwindling water resources. Yet come this monsoon season, as the city of Mumbai was submerged after being battered by a storm, hundreds of villages in the eastern part of the country stood abandoned as residents had fled the floods.

The dead are accounted for, but no one has accounted for the millions of lives affected by the displacement, and the mental, emotional, and economic distress caused by the seasonal droughts and floods.

India’s environmental burden of disease is substantial and attributable to modifiable risks, which include household and ambient air pollution, unsafe water, and poor sanitation and hygiene practices. Death, disease, injuries, and psychological stress due to extreme weather events, along with malnutrition, cardiorespiratory diseases, and a rise in vector borne diseases are all major climate-sensitive health risks for India, which are projected to add to the disease burden of the country.

Extreme temperatures and erratic precipitation patterns are already increasing the severity and frequency of droughts and floods across the country. Clearly, the changing monsoon patterns are to blame for the severity of the droughts. Climate change has been blamed for the floods, but that is not the complete story. Poor city planning, inadequate infrastructure, and development that hasn’t been thought through—together with political and public apathy and a lack of accountability at all levels of governance—have left Indian cities and towns vulnerable to extreme weather events. As these extreme weather events disproportionately affect poorer populations, children, and women, they will further widen existing economic, health, and social inequalities in India.

Much of the Indo-Gangetic plain, which spreads across northern and eastern India, eastern Pakistan, and most of Bangladesh, and which is home to almost half a billion people, is prone to recurrent seasonal monsoon flooding. In the northeast, the Brahmaputra River on its journey from Tibet through to the Bay of Bengal overflows its banks in annual floods in Assam, India, affecting the health and livelihoods of millions of people living on and off the river. Any prevention strategies are easily overwhelmed in such large, high density human settlements.

Addressing these challenges in a country of 1.3 billion people is a Herculean task. In recent years, attention has been increasingly focused on building community resilience to adapt to these problems, as well as to help mitigate them. Given the geographic, cultural, and social diversity of India, disaster mitigation and resilience building frameworks will have to be informed by local knowledge and practice.

The seasonal nature of these disasters, together with the limited resources directed at them and the authorities’ faltering response to resolving them, often means that response mechanisms are lacking. This leaves communities to employ their own coping mechanisms to deal with the aftermath of these events.  Communities have dealt with natural climatic variability for centuries, and their indigenous local knowledge and practices are time tested and align with local needs and priorities.

Communities are now revisiting these traditional coping strategies, adapting them with expert help where suitable, to evolve local level solutions that can adequately protect their lives and assets. These include planting more short term crops on agricultural land, introducing early warning practices at the community level, improving surveillance to prevent the spread of diseases, building “ice stupas” to address water scarcity in the high altitude desert of Ladakh, and boat clinics to bring healthcare to remote island communities along the flood prone Brahmaputra.

A number of communities have also developed means to gain an income and carry on their everyday lives in ways that are flood resilient. Some of these good practices include cage culture for fish farming, “floating gardens” for vegetable cultivation, disaster resilient shelters, organic homestead gardens, and “floating classes” for flood affected children. However, such practices are few and far between. They remain below the “radar” as they are largely locally driven and carried out through informal, undocumented processes. Going forward, the documentation of these practices and their integration with scientific methods should inform all disaster management frameworks.

If we are to overcome the large scale climate change challenges ahead of us, we don’t necessarily need grandiose solutions aimed at prevention. What will work best are decentralised adaptation strategies that are locally driven, involve the scientific community and community leaders, and are flexible in accommodating unpredictability in climate conditions.

Dr Banalata Sen is an adviser at the Centre for Environmental Health, Public Health Foundation of India, where she is helping to develop the centre’s portfolio of activities in research, education, capacity building, and advocacy.

Dr Manu Gupta is cofounder and executive director of SEEDS. He has 20 years of experience in advocacy and mobilisation of community led efforts in recovery and disaster risk reduction, climate change adaptation, and emerging issues.