Ancient physicians considered medicine to be an art, typified by an aphorism of Hippocrates:

Plato repeatedly referred to medicine as an art, for example in the Gorgias and the Symposium, as did Roman writers, such as Cicero, Ovid, and Celsus. However, the idea that medicine was also a science gradually emerged. Galen, for example, wrote that “according to an old saying, medicine is the science of agencies healthful and harmful”. We still consider the balance of the likelihoods of benefits and harms to be at the foundations of our therapeutic decisions, based on the scientific evidence, preferably from randomised controlled trials, but also from other sources when such evidence is not available. It may have been Paracelsus who first declared, in Die grosse Wundarznei (1536), that “Die Medizin ist nicht nur eine Wissenschaft, sie ist auch eine Kunst”; medicine is not only a science; it is also an art.

The word “art” has its origin in the IndoEuropean root AR, to join or fit together. An anatomical joint in Greek was ἄρθρον, giving us arthropathy, arthritis, dysarthria, and synarthrosis. Things that are joined together are articulated, and being able to produce joined up speech makes you articulate. Joining up your thoughts may result in an article, such as this. In grammar an article can be definite (the) or indefinite (a/an), a terminology that developed from the Greek method of referring to pronouns and articles as joining words, the pronouns being definite joining words (ἄρθρα ὡρισμένα), the articles being indefinite joining words (ἄρθρα ἀοριστώδη). Reduplicate AR in Greek and you get ἀραρίσκειν, to join or fit together.

The Greeks had a different word for a carpenter’s or metalworker’s joint, ἁρμός, which could also refer to the shoulder joint; ἁρμονία, meant a means of joining, such as a joint in a ship’s planks or a surgical suture, and also the joining together of the notes in the musical scale, from which we get harmony, a concordant joining of sounds.

The Greek word ἄριστος meant the most fitting and therefore the best and specifically the noblest of birth. Aristocracy was rule by such people, who were not necessarily the best rulers. Aristotle’s name means “by far the best” . 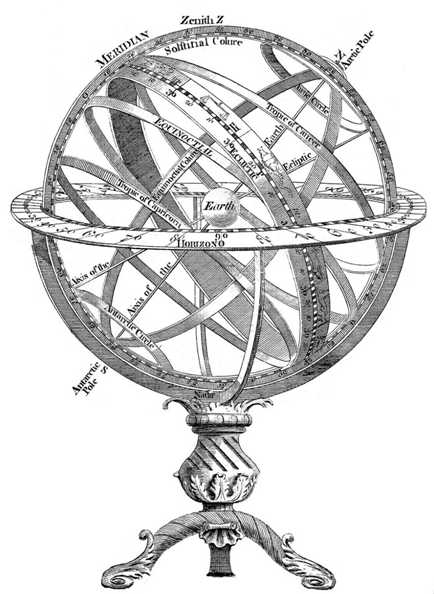 In Latin the shoulder joint was armus, giving us the arm. The bits and pieces that you used to cover the arm and therefore the rest of the body in battle were called arma, from which we get army, armour, armada, and armadillo. In Latin armilla was an armband, and an armillary sphere consists of “a spherical framework of intersecting circular rings centred on a sphere representing the earth or the sun, the framework revolving on a fixed axis within graduated horizon and meridian rings” (OED; picture). A coarctation is a constriction, typically an abnormality of a blood vessel, usually the aorta, as if an armband had been applied to it.

The Latin word ars implied the ability to join things together harmoniously. It primarily meant the technical skill required to produce works of art or craft and hence artificial methods or human ingenuity. It then came to mean a trick or stratagem and then a body of knowledge and practical techniques.

Bonae artes, what we would call fine arts (French beaux arts), meant cultural pursuits. Liberal arts were originally the seven subjects of the ancient trivium (grammar, rhetoric, and logic) and quadrivium (arithmetic, geometry, music, and astronomy) but the term now refers to arts subjects in general, as opposed to science and technology. An artist produces art and inertia is an inability to do so.

Since one number was joined to the next, ἀριθμός in Greek meant a number, ἀριθμεῖν to count, and ἀριθμητική (τέχνη) the art of counting, reminding us of algorithms. This gave the Latin word arithmetica, which was misinterpreted in 14th century English as ars metrica, the art of measurement, which arithmetic is.