This blog outlines research involving  3,909 professional male football players across 54 Champions League teams in Europe over 21 consecutive seasons. The main aim was to evaluate the time trends of hamstring muscle injuries. Our report from the Elite Club Injury Study (ECIS), recently published in BJSM, was initiated, and funded by the Union of European Football Associations (UEFA) and carried out by the Football Research Group (FRG) at Linköping University in Sweden on their behalf (1).

The purpose of professional football is winning games and trophies.  In order to win, teams need their players available at training and matches. As we have shown before, high availability of players is positively associated with team success. Injury is, by far, the most common reason for absence from training and matches. Muscle injury is the most common type of injury and now constitutes 55% of all time-loss injuries and causes more than half of all absence days from football activities. Of all these muscle injuries, injuries to the hamstring muscle group are the most frequent andis the single most burdensome injury in male professional football, previously reported to constitute 12-17% of all time-loss injuries.  Hamstring injuries are also the most common injury to reoccur amongst footballers.

Researchers have proposed various interventions to stem the tide of hamstring injuries, and teams have variably embraced systematic hamstring prevention programmes. Our aim was to describe hamstring injury incidence and burden over the last 21 seasons from study inception in July 2001 to the end of the previous season in May 2022, but especially to analyze the time-trends of hamstring muscle injuries over the most recent eight seasons. If hamstring injury incidence and burden have risen in recent years, it might imply that current preventative measures are not working in the real-world setting.

We used a study design that closely followed the international consensus statements and reporting guidelines for epidemiological research in sport, in particular football. Consequently, we used a time-loss injury definition which means that contact persons in the participating clubs were asked to give a date when injured players were considered ready for full return to participation in all team activities.

We took steps to increase the reliability of the collected data, such as a detailed study manual and close communication between the study group and all participating football teams and data collectors. To increase the homogeneity of the cohort over different seasons, the data reported here only include players from teams during seasons in which they qualified for the Group Stage of the UEFA Champions’ League.

This study is important, unique and with robust results as we collected exposure and injury data from 54 teams during 21 consecutive seasons including 2,636 hamstring injuries during 2,1 million hours of exposure to training and matches.

These data on incidence and burden of hamstring injuries suggest even more collaboration among the researchers and the clinical communities is needed to try to find more effective programs for prevention of primary and recurrent hamstring injuries. 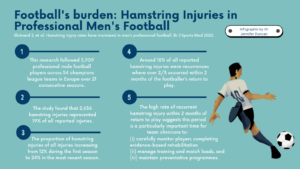