Cardiovascular preparticipation screening (PPS) is routinely practiced across the globe and supported by numerous international medical societies. Despite its widespread use, the connection between cardiovascular and psychological health, and more specifically, the mental toll that screening has on athletes, is rarely considered by health care professionals involved in the cardiovascular care of athletes. In this blog we will highlight our systematic review (recently published in BJSM), which summarized the existing literature on the psychological implications of PPS (1).

Sudden cardiac arrest (SCA) is the leading cause of death among athletes and remains a substantial public health challenge worldwide. Although these events are rare in the athletic community, they gain significant public visibility; the sudden cardiac death (SCD) of any young athlete has a traumatic impact on families, friends, and communities. To mitigate the occurrence of SCA/D, early detection of cardiac abnormalities is crucial. Cardiovascular PPS is universally recommended to identify athletes at risk for SCA/D, however, the suggested screening practices vary notably across international organizations. The potential psychological burden placed on athletes undergoing PPS is a primary contributor to this lack of standardization, as there remains uncertainty regarding the psychological impact of cardiovascular PPS among the general athletic population. This study is important because it is the first systematic review to comprehensively summarize the evidence surrounding the psychological implications of cardiovascular PPS in athletes and may inform the development of novel guidelines and policy recommendations regarding the cardiovascular screening of athletes.

We conducted systematic literature searches of relevant databases and grey literature. Eligible studies included observational and experimental research studies assessing a population of athletes who participated in a cardiovascular PPS protocol, where psychological outcomes before, during, and/or after PPS were reported. Study selection, data collection, and risk of bias appraisal was conducted by two independent reviewers. The results of included studies were synthesised by consolidating similar study-reported measures for key psychological outcomes before, during, and/or after screening. Summary measures (medians, ranges) were computed across studies for each psychological outcome.

Among the eight studies included in this review, all of which used an electrocardiogram (ECG) as a component of their screening, we found that cardiovascular PPS caused minimal measurable psychological distress before, during, and after screening, unless a true cardiac diagnosis is identified. Furthermore, athletes who experienced a false-positive screen did not report more psychological morbidity compared with those who screened normal. A universal conclusion across all studies was that athletes were satisfied with the screening process, felt safer during competition after screening, and would recommend PPS to other athletes, even across true-positive, false-positive and normal test result subgroups.

Our research suggests that despite the risk of psychological distress in a small proportion of athletes, almost exclusively those who screen true-positive and receive a cardiac diagnosis, the vast majority report positive perceptions and experiences with PPS regardless of screening results. These findings support that psychological distress due to screening should not be used as a reason to forgo cardiovascular PPS. Appropriate psychological resources should be made accessible and routine follow-up should be performed to mitigate potential downstream consequences in athletes being screened. Further, although some studies report that athletes express dissatisfaction with their care or desire additional support following screening, there remains little indication of how the psychological care process can be improved to better suit the needs of athletes undergoing PPS. To fulfil this knowledge gap, future mixed-methods research is needed to understand athletic perspectives on PPS, as well as identify key barriers and facilitators to the provision of psychological care throughout screening. 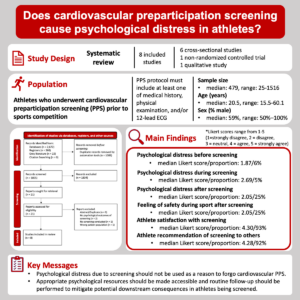