The Swiss Association of Sports Physiotherapy (SSPA) is 20 years old. The SSPA was founded on November 22nd 2002 in Magglingen (“the home of Swiss sport”) by 47 Swiss sports physiotherapists. The first committee elected in 2002 aimed to respect the Swiss specificity and represent the three main languages (German, French and Italian) of the country. The members of the first committee were: Stephan Meyer (president), Nicolas Mathieu (vice-president), Mario Bizzini, Christian Meissgeier, Hans Koch and Mauro Foschi. While some of these members are still at the forefront, the board is now composed by 9 members (4 women), supported by one secretary. Currently (September 2022) the association counts 560 active members.

The first conference, which had the topic of “Safe come back”, took place in May 2003 in the Schulthess Clinic Zürich, with 100 interested sports physiotherapists  attending. Bern then soon became the home city of this popular conference, which has become a well-renowned international sports physiotherapy event. Among others, SSPA organized in 2015 the first     World Congress of Sports Physiotherapy, with almost 800 participants from all over the world. After two virtual editions (2020-21), we’re back in-person in Bern again for the 20th edition and to celebrate 20 years of SSPA.

All of our past conferences since 2013 can be viewed via our YouTube channel. For example, previous presentations from Clare Ardern in 2015, Jill Cook in 2017, and Jeremy Lewis in 2019.

BJSM has been a consistent and important partner for our conference, especially in 2012 (10th edition), 2015 (World Congress, “Return to Play”) and 2018 (joint congress with Sport & Exercise Medicine Switzerland) the cooperation was outstanding. The consensus meetings organised around the 2015 and 2018 events led to some important BJSM publications, thus highlighting the international reach of this conference.

The goal of SSPA has always been to organise a high-quality scientific congress featuring international high-profile speakers. The 20th edition aims to cover “Best Practice” for some of the most common challenges which sports physiotherapists encounter with patients/ athletes: knee, shoulder, hip/groin, ankle, low back and muscle problems. This year speaker’s line up is impressive: Andrea Mosler (Australia), Phil Glasgow (UK), Lynn Snyder-Mackler (USA), Fiona Wilson (UK), Eamon Delahunt (UK) and Kevin Wilk (USA) will provide not only the current best evidence, but highlight how sport physiotherapists can best translate this knowledge into their daily practices. At the BernExpo participants will have time to network with colleagues and speakers in a relaxed atmosphere. 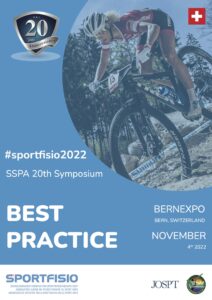 Please visit our website (https://sportfisio.ch/symposium/) and you’re one click away to register for #sportfisio2022 in Bern on November 4th!

We’ll be very happy to welcome YOU in Bern!