What is the association between Olympic Games and children’s growth? Looking at evidence from China

In this blog we will share the study (recently published in BJSM) about the association between the 2008 Beijing Olympic Games (BOG) and growth of children in China. It found that the BOG was positively associated with healthier growth of children including decreased risks of both undernutrition and overnutrition.

The present study, using the BOG as a natural experiment, was designed to capture the potential long- term association of Olympic Games and children’s growth at the population level via the difference-in-difference-in-differences (DDD) method, established by examining the regional variations of Olympic Games exposure across age groups and survey periods. The investigation of the relationship between the BOG after SARS and health can provide implications for the follow-up influence of the Beijing Winter Olympic Games during this epidemic given that both games were held in China, although there are differences in the type of Olympic Games and the status of the pandemics. This research will also help us to assess the association of the Olympic Games and children’s growth more comprehensively.

The existence of the 2008 BOG in China was used as a natural experiment since it is exogenous for any individual and is suitable to obtain an appropriate counterfactual condition to estimate its influence. Individual-level data were obtained from the China Family Panel Studies (CFPS). Figure 1 illustrates the derivation of our analytical sample. The association between the BOG and children’s growth was estimated by comparing the variations of outcomes across triple BOG-related differences including the age groups, periods and living areas where the children were investigated. 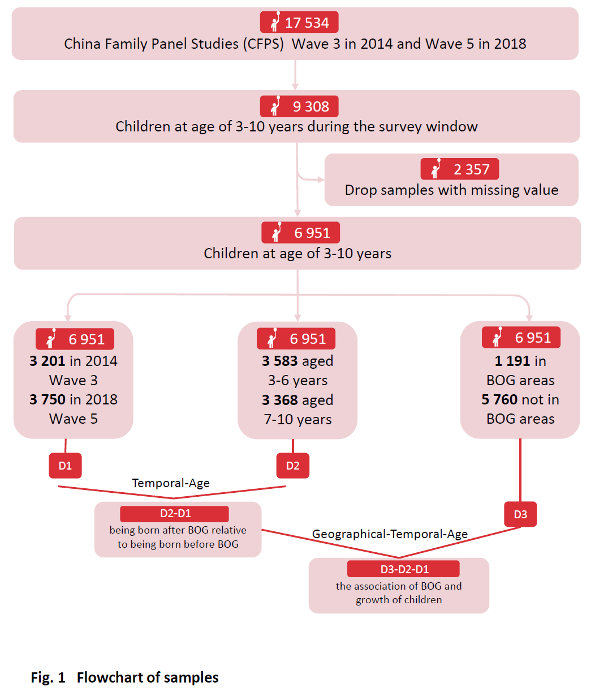 Among the analyzed children, the prevalence rates of stunting, underweight, overweight and obesity were 7.80%, 26.36%, 14.10% and 20.89%. The prevalence rates of the above four indicators by single difference from age groups, survey period or BOG areas were shown in figure 2A. Figure 2B presents the DDD estimates of the association between the BOG and stunting, underweight, overweight and obesity of children. BOG exposure was found significantly associated with decreased risk of children’s underweight (OR 0.12, 95% CI 0.02 to 0.69) and overweight (OR 0.42; 95% CI 0.18 to 0.98) after controlling for multiple covariates. The association between being exposed to the BOG and odds of stunting and obesity was not statistically significant. 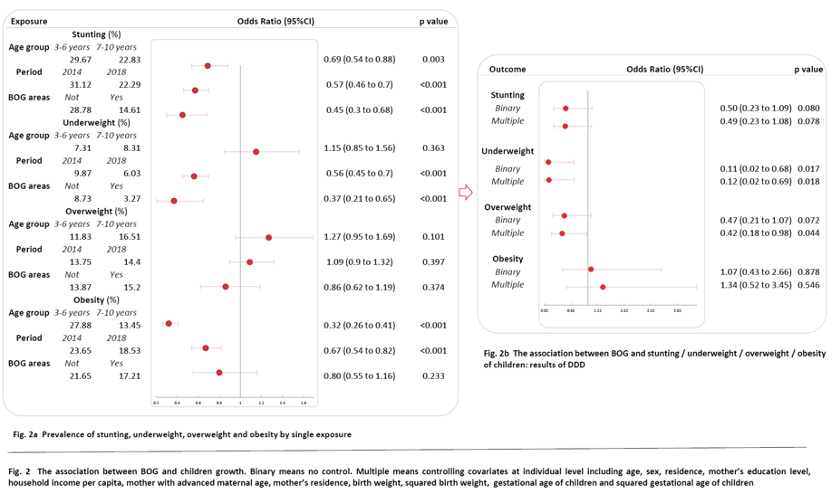 Sex heterogeneity of associations between the BOG and stunting, underweight or overweight was not found (p for interaction>0.05). However, there was significant sex heterogeneity (p for interaction<0.05) with regard to the association between the BOG and child obesity, that is, significant lower risk of obesity was found in female sample (OR 0.24; 95% CI 0.06 to 0.94 in fractional polynomial model) but not in male sample.