An insight into an original research, as part of the BJSM’s new #KnowledgeTranslation blog series

Link to the paper in BJSM here

Krylov’s Inquisitive Man travelled around a museum observing all sorts of minute details, but in so doing failed to notice the massive elephant on display.

Single hop for distance is the most used functional test after ACL reconstruction mostly because of the ease of use – we just need a measuring tape!

Many clinicians realize the limitations of using distance as a discharge criterion after ACLR, but it is difficult to abandon. To date, the majority of ACL research uses distance to evaluate all sorts of surgical or rehabilitation interventions and outcomes. Single hop for distance has even been used to evaluate strength in case dedicated equipment is not available.1

Hop tests – an unnecessary ingredient in a delicious dish?

Hop tests are commonly used as part of a testing battery for sportive discharge. But is this ingredient necessary? Currently, these tests are still being used as criteria to return to sport after ACL reconstruction, not because passing this test means you’re safe to return to sport, but mainly because passing a battery of tests is associated with a lower risk of re-injury.2 3 However, a more detailed analysis of the data indicates that only strength measures were associated with re-injury rates, not the hop tests.2 3 As a result, hop tests’ predictive validity cannot be established based on available literature.4

In a recent systematic review, hop testing’s validity was questioned in evaluating lower limb status after ACLR,5 but the included studies evaluated patients at several time points after surgery. We do not have enough information on the knee function of an athlete at the time they achieve symmetry in hop distance and are cleared to return to sport. For this reason, we wanted to do an in-depth biomechanical analysis of the test and see whether it tests what is supposed to test.

What we did and what did the study find?

Why hop for distance test is still one of the best? It’s not the journey, it’s the destination (the landing).

We still think that hop for distance is an important test to be included in a battery to clear an athlete after ACLR, but we don’t pay much attention to how far the athlete hops. The real information is only revealed if you are lucky enough to have a fully equipped biomechanical lab so we can measure this: 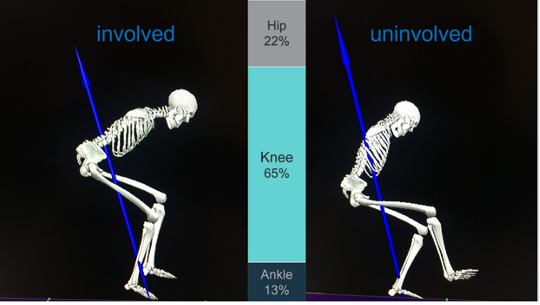 Athletes learn how to shift the load from their knee to their hip and ankle, despite hopping the same distance. Quantifying the actual work done by the knee during landing is the key metric, and one you can’t see with the naked eye, or a measuring tape. If you only measure distance, and it’s the same as the uninvolved side but the athlete has invisibly unloaded their knee, you’ll be fooled into thinking they are ready.

Hop for distance is a great way to train landing

Hop for distance can be useful to evaluate the quality and the stability of landing – remember, work absorption during landing is done 65% by the knee, but the distance hopped doesn’t tell you how much work the knee did. A gentle suggestion: these biomechanical analyses have taught us that “eyeballing” this is a great way to get fooled by your athletes.

Hop for distance can be used to track progress during rehabilitation, although we are not sure what we are testing. Low LSI distance values may measure other contributing factors such as  fear of landing rather than direct  knee function. Hop distance has been correlated with self-reported knee function6 and fear avoidance,7 but we have more appropriate tools to measure these patient-reported outcomes.

We should have in mind that symmetry in the distance is achieved earlier than symmetry in strength.8

At discharge, we usually evaluate strength, functional tests, and psychological readiness. Measuring distance adds little to our decision if the athlete is ready to return to sport or not.

However, the hop for distance test itself, specifically the landing phase, can offer valuable information on the status of the knee joint, but requires 3D biomechanical analysis – an apparatus not frequently available in clinical setting.

In the absence of advanced equipment, tasks other than a single hop for distance and variables other than distance may be more appropriate to capture the differences between legs and offer a more accurate estimation of the knee’s status. A vertical hop performance (jump height) might be more sensitive to knee asymmetry than a horizontal hop performance, where knee contribution is 33% (vertical) compared to 12% (horizontal).9