In #PartOne, Pippa Woolven highlighted some of the personal risk factors associated with RED-S in international student athletes. In part two, she details some of the more structural risk factors, and suggestions to try and reduce the risk of athletes suffering from RED-S. 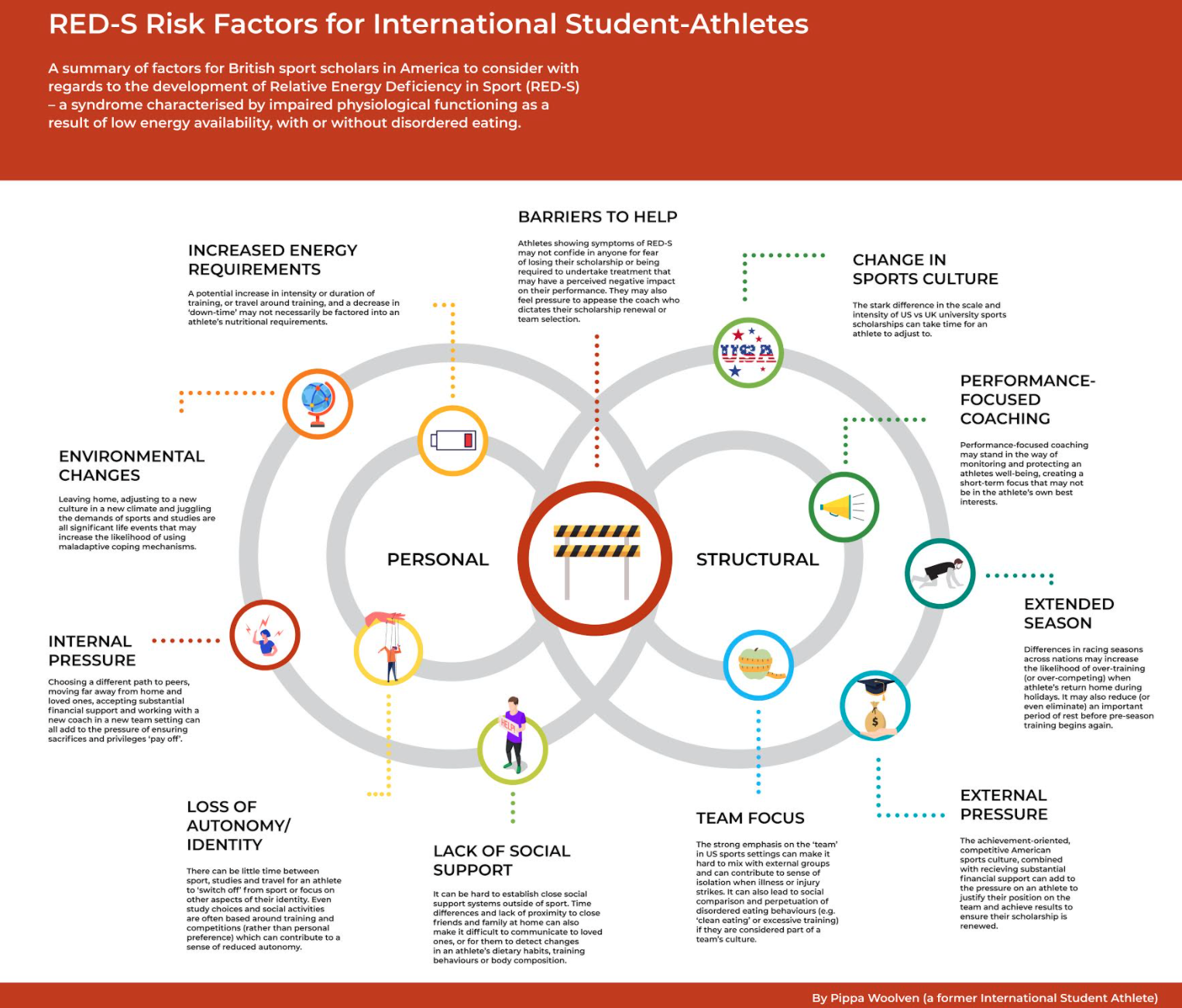 Adjusting to a new sports culture

US university sport is a multi-billion-dollar industry, individually governed by faculties, administrations and alumni whose focus typically concerns performance and prestige. A strong Lombardian work ethic is instilled into domestic athletes from an early age, meaning they are well adjusted to the competitive, ‘win at all costs’ culture by the time they graduate from high school. In contrast, UK school and university sport (while still competitive) places a large emphasis on participation, with the number of club members being a key indicator of success. Though talented athletes pursuing scholarships in the US are likely to be competitive and ambitious, it can take time to adjust to this cultural difference.

US university sport is extremely achievement-oriented; coaches and athletics directors tend to model programmes on professional sport with an emphasis on winning or ranking highly. In addition to mass media attention and large crowds of spectators, the substantial financial scholarship support can be a strong source of external pressure. This may be the first (or most intense) kind of external pressure many ISAs have experienced and can lead to adopting maladaptive coping strategies, such as calorie restriction or excessive training.

The competence and salary of a US university coach is based upon the results of their team. As such, coaching is often focused on short-term performance goals, which can lead to making unreasonable demands or setting unrealistic standards for their athletes. Team members are often treated uniformly i.e. most follow the same training plan and train at the same intensity or frequency despite individual differences in previous training load or athletic maturity. In addition, an ISA typically occupies a scholarship on a rolling contract, during which time it is in a coach’s interests to eke out every ounce of their potential. As such, there can be very little incentive for the coach to protect an ISAs longer term development, which may stand in the way of monitoring and protecting their wellbeing. For example, If a coach is driven to attain short-term performance goals, they may be less likely to ask about (or monitor) a female’s menstrual health, leading to a key indicator of RED-S (missed or irregular menstrual periods) going unnoticed.

The US places a far greater emphasis on the ‘team’ aspect of athletics than the UK. Not only do US university teammates typically train together, travel together and eat together, but often they live together too which can make it hard for ISAs (being far away from home) to maintain social interactions outside of the team. This can contribute to a lack of life balance or a social support outside of sport and when inevitable illness or injuries strike, an ISA may feel a large sense of isolation from the team. Additionally, the close-knit nature of teams can be a breeding ground for comparison and may reinforce certain disordered eating behaviours (such as ‘clean eating’, calorie counting, restricting specific foods, following strict diets or excessive training), if they are adopted within a team’s culture.

The US athletics season runs from August (start of cross-country) to June (end of track season). The UK and European track season tends to end in late September or even October, meaning ISAs who are returning home from University for the summer have an opportunity to extend their season. Likewise, there are opportunities to race in the UK over the Christmas holidays, while US teammates would be resting. Often qualification races for age group international teams require competing in additional UK events – which can further increase the likelihood of over-training (or competing) and may also mean the ISA has a far shorter (or even non-existent) period of rest before returning to America for pre-season training.

According to the NCAA, there are more than 20,000 international student-athletes  (ISAs) studying and competing at US Universities[1]. Given the significant size of this athletic sub-portion and the unique challenges they face, there is need for a support system that differs from domestic student-athletes. Further support in this area may not only serve to increase an athletes wellbeing and reduce their risk of RED-S, but should also be in the best interests of the institution since the financial investment of the athletic department hinge on retention of scholars through the transitionary period as well as their sporting success. Further, the reputation of athlete wellbeing and health should factor into future athletes’ university selection decisions and consequently the recruitment success of an institution. As a former ISA, I have created the following infographic to present my personal recommendations for some such support services. 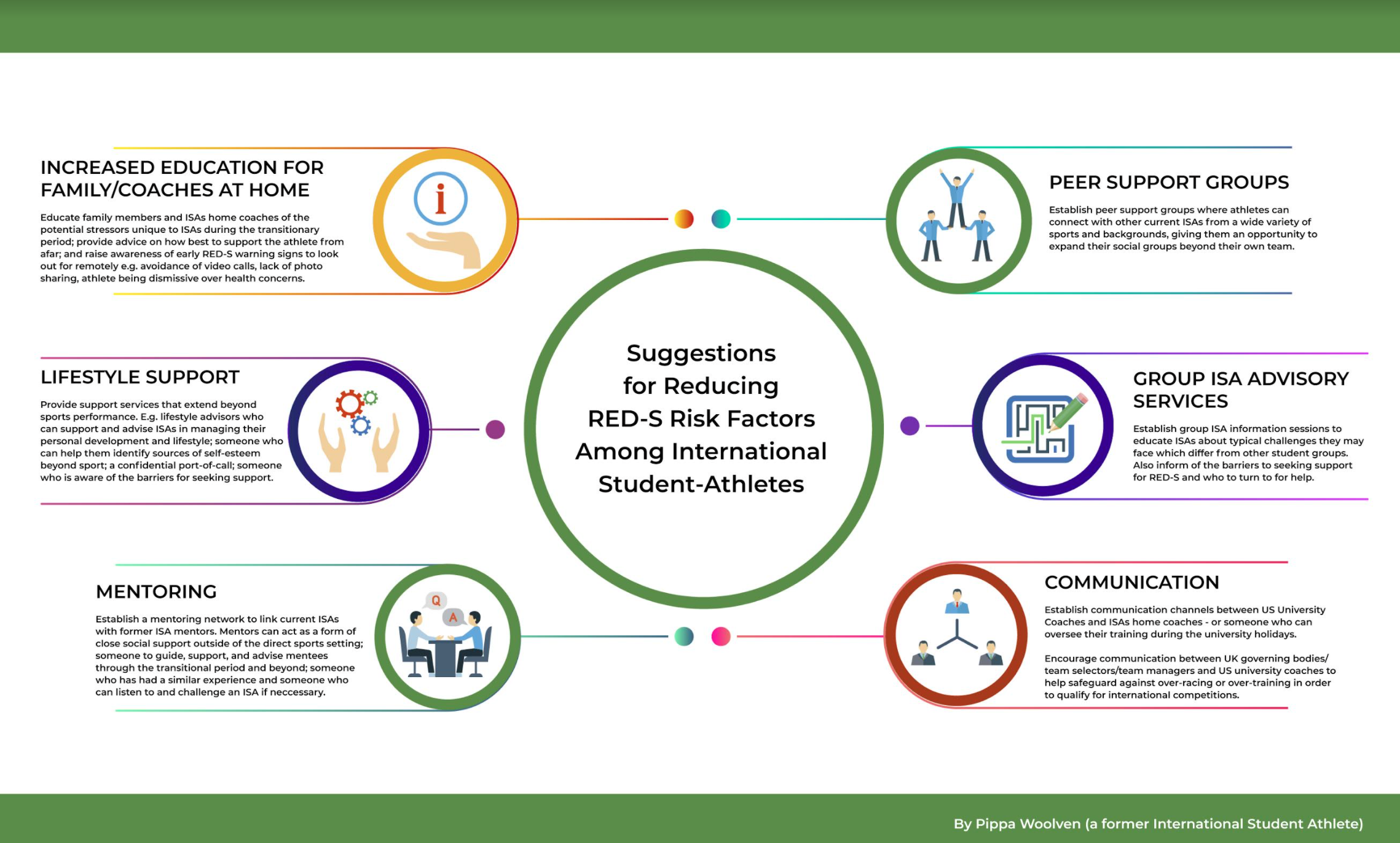 Pippa Woolven is a GB distance runner who balances elite athletics with full time work for the National Trust. During her university years, Pippa won three British University titles (in Cross-Country and 3,000m steeplechase) and represented England at the Commonwealth Games whilst studying in America on a sports scholarship. Since then, Pippa has battled and overcome several health issues including disordered eating, RED-S and amenorrhea – topics which she now helps mentor others through at www.athletesinbalance.com. Having returned to good health, Pippa was part of the silver medal-winning British Team at the European Cross-Country Championships in 2018 and finished 35th at the World Championships in 2019.