An insight into the randomised, placebo-surgery controlled FIDELITY trial, as part of the BJSM’s new #KnowledgeTranslation blog series

Here we explain the latest 5-year results of our FIDELITY (Finnish Degenerative Meniscus Lesion Study) trial, a placebo-surgery controlled trial that was launched in 2007. The full-text can be obtained here.

The initial 1-year follow-up study, showing that arthroscopic partial meniscectomy (APM) provided no better symptom relief than placebo-surgery, was published in 2013 in the New England Journal of Medicine1. It may not be a huge exaggeration to state that the findings, practically eroding the evidence-base for the most common indication for the most common orthopedic procedure, were received with ‘mixed emotions’ in the orthopedic communities.

This brief video captures the chain of events that followed the publication of the FIDELITY 1-year data:

So, do we really need yet another study on this issue?

If no benefit for symptoms seems bad in its own right, things might be even murkier for the proponents of the APM procedure. Evidence from observational studies2 3 and some previous unblinded trials4-6 has lent support for concerns that in addition to being ineffective, APM might even cause harm in the form of accelerating the progression of knee osteoarthritis (OA). Given the legitimate concerns expressed regarding such inferences due to the nature of the previous data, we felt that our FIDELITY trial – given its novel placebo-surgery controlled design – was particularly fitted to overcome the concerns and address this pressing issue more definitely.

Additionally, given the existing strong voices that argue for the potential benefits of APM for ‘patients properly chosen for the procedure’, we felt that it would be a worthwhile effort to study the long-term effects, particularly as there exists some data to suggest that procedure may actually be associated with increased risk of progression of knee OA and subsequent need for “corrective” surgery.2 11

How was the FIDELITY trial carried out?

During a 5-year recruitment period, we screened more than 200 patients with knee symptoms consistent with degenerative medial meniscus tear and sent them all for an MRI scan. We ended up with 146 adults – who underwent either APM or placebo-surgery (Figure 1). 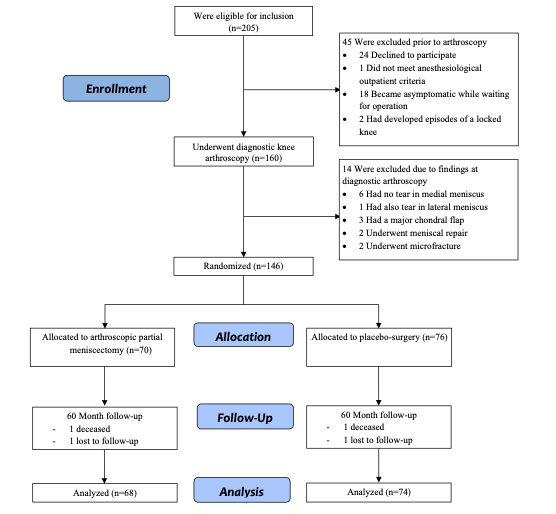 What did we discover?

To make a potentially long story short, APM provided no more benefit for knee symptoms or function than placebo surgery in the three PROMs we used (Figure 2). 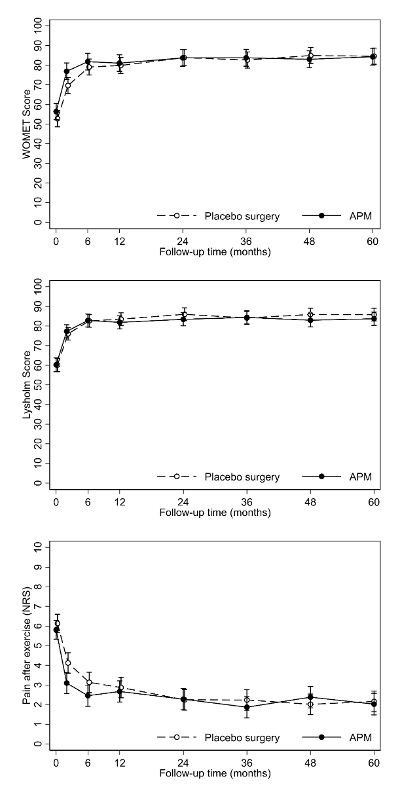 If no benefit on knee pain and function was something to be expected (based on the existing evidence, including the shorter-term findings of the FIDELITY trial), the most concerning finding of this study was that APM was associated with a slightly increased risk of developing radiographic knee OA at 5 years after surgery (Figure 3). 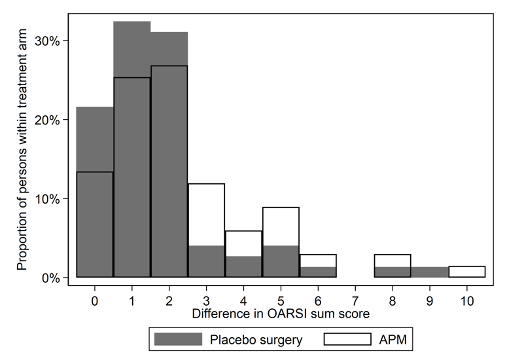 Figure 3: A histogram depicting the change in OARSI sum score from baseline to 5-year follow-up in the APM (blank bars) and Placebo-surgery (dark bars) groups. X-axis shows the difference between 5-year and baseline OARSI sum score, while the y-axis shows the percentage of participants with each change score, per treatment arm. The higher the bars are at the right end of the x-axis, the more participants with more advanced progression of OA (higher OARSI score).

Of note, only five years ago, the presence of ‘mechanical symptoms’ (sensations of knee locking or catching) was considered an ‘absolute’ indication for APM. We used our FIDELITY data14 15 to bust this widely-held contention. The 5-year data published now in the BJSM lend further support to the view that presence of ‘mechanical symptoms’ in a middle-aged and older patients are likely simply due to more advanced knee OA, and accordingly, should be considered a contraindication for APM. We hope that our results – suggesting an increased risk of development of knee OA – finally prompts this much-needed pendulum shift,. It truly is time to abandon ship and stop performing APM for middle-aged and older adults with knee pain.