Regular aerobic exercise (AE) can stop and even reverse brain atrophy. One year of moderate AE has been shown to increase hippocampal volume and improve memory in healthy older adults (1). Recent meta-analytic evidence has confirmed the effects of AE at augmenting hippocampal volume in the healthy late adulthood brain (2,3). Furthermore, grey matter volume in older adults can benefit from physical activity (PA) and physical fitness (PF) and there may be a positive relationship between PA and white matter volume (4,5). It is not yet clear if brain volume augmentation is also mediated through resistance training (RT). RT may have benefits for human brain health, at least according to rodent studies (6,7). The previously mentioned review by Feter et al (2) reports on one study, in which AE (15 minutes) in combination with RT (30 minutes) was able to increase brain volume in obese individuals (8). However, no evidence was found for RT mediated increases in hippocampal volume in elderly women (9,10).

Exerceuticals versus pharmaceuticals for neurocognitive disorders

Performing intensive exercise (EX) over a long period of time improves PF in patients with dementia (11). Indeed, PA and its subset EX both have beneficial effects among people with pathological conditions, such as dementia, Parkinson’s disease (PD), multiple sclerosis (MS), depression and brain injury following e.g. trauma or stroke (12). These pathological conditions are associated with neurocognitive disorders (13) and cognitive impairment is common in the abovementioned conditions (14–16). Benefits of pharmacological treatment for cognitive impairment associated with these mentioned disorders are rather small (17,18). For example, among the many anti-dementia drugs, the apparent best drug is Donepezil (19) and a recent Cochrane review shows that patients with Alzheimer’s disease (AD) and treated with Donepezil ‘experience small benefits in cognitive function, activities of daily living and clinician‐rated global clinical state’ (20). PA and EX may have better treatment effects for cognitive impairment in patients suffering from dementia compared to pharmaceutical therapy, despite its role in improving cognition is still uncertain (21).

Exercise medicine for cognition in dementia

The positive effects of physical activity and exercise on cognition and brain function has been documented over the recent years (22). According to Schmid et al. (23) physiotherapeutic PAI can promote health in dementia and delay the course of the disease. A Cochrane review concludes that exercise programs may improve the ability to perform Activities of Daily Living (ADLs) in people with dementia’, but there is ‘no evidence of benefit from exercise on cognition, neuropsychiatric symptoms, or depression’ (24). However, more recent meta-analyses conclude that PAI such as AE and a combination of physical and cognitive training can benefit cognition in patients with dementia (25,26). Reasons for these conflicting conclusions are due to the way the (meta-)analyses were performed and heterogeneity (variation or differences across studies) was handled (27).

Exercise prescription for cognition in dementia

Recommendations for exercise prescription to stabilize and/or enhance cognitive function in patients with dementia can be made. For example, AE as in treadmill training for three months, twice a week for 30 minutes at 60% VO2max improved cognition as measured by the Cambridge Cognitive Examination (28).

Also nine weeks of combined AE and RT proved to be more effective than aerobic-only training in slowing cognitive decline in patients with dementia. AE consisted of twice weekly 30-minute walking sessions at moderate or high intensity as measured by rate of perceived exertion (RPE). Moderate and high intensity, i.e. at RPE 12 & 15 respectively, were adjusted by varying the individual walking distances per session. RT was executed twice weekly for half an hour and consisted of lower extremity exercises at RPE <12. The exercises were progressively loaded in frequency (three sets with 8-12 repetitions) and load via ankle weights (0.5-1.5 kgs).

Type of exercises: seated knee extension, plantar flexion through heel raises while holding both hands of the trainer, hip abduction by moving the straight leg sideways while standing behind and holding on to a chair, and hip extension by moving the straight leg backwards while standing behind and holding on to a chair (29). Despite these positive results, no benefits for cognition for combined AE and RT was observed in the Dementia and Physical Activity (DAPA) trial. On the Alzheimer’s Disease Assessment Scale ‐ Cognitive Subscale (ADAS‐Cog) the authors found a ‘small, statistically significant negative treatment effect’ (30). Interestingly, another novel treatment method that may improve cognition is intermittent hypoxic-hyperoxic training or IHHT. IHHT is a modified intermittent hypoxic training (IHT) and a noninvasive, easily applicable method based on repeated resting exposures to an oxygen-deficient gas mixture interspersed by normoxic periods. In a randomized controlled trial, IHHT contributed significantly to improvements in cognitive function in geriatric patients who suffered from moderate dementia (31).

Promotion of physical activity interventions to improve the health of patients suffering from dementia seems meaningful. Increasing evidence demonstrates the positive effects of PA – especially its subset EX – on brains of healthy and demented persons. In light of these findings and the modest effects of pharmaceutical treatment on cognitive functioning in the diseased brain, EX should be considered an important adjunct treatment. It remains unclear which EX and or training components are superior, i.e. show the largest beneficial effects. Further primary intervention research and subsequent systematic reviews with network meta-analyses may answer this important question. 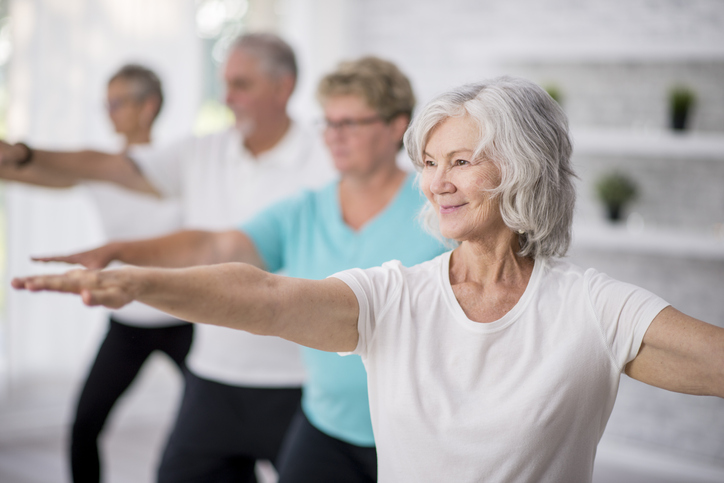