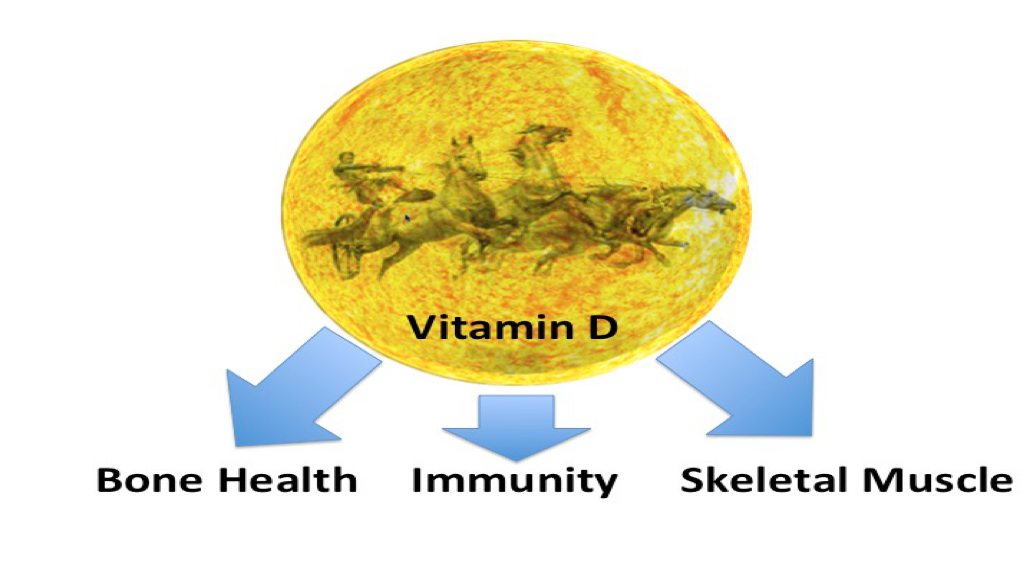 The action of the sun on skin is the most effective way of making vitamin D. However, even walking around outside naked for 5 hours every day during UK winter months is not sufficient to make adequate vitamin D. Therefore, much to the relief of the audience at the recent BASEM Spring conference, this was not a strategy recommended by Dr Roger Wolman.

Vitamin D is a fat soluble steroid hormone. The majority of which is synthesised in the skin when exposed to ultraviolet B in sunlight, with a small contribution from dietary sources: this vitamin D3 molecule is then hydroxylated twice in the liver and then kidney to produce the metabolically active form of vitamin D. This activated steroid hormone binds to vitamin D receptors in various tissues to exert its influence on gene expression in these cells. The mono hydroxylated form of vitamin D is measured in the serum, as this has a long half life.

Does it matter having low levels of circulating vitamin D during winter months? What are the solutions if moving to warmer climates during the winter is (unfortunately) not feasible? What are the other hormones interact with vitamin D? What are the beneficial effects of vitamin D, particularly in the athletic population?

Rickets and osteomalacia are conditions where vitamin D deficiency results in bone deformities and radiographic appearances are characterised by Looser zones, which in some ways are similar in appearance to stress fractures.

In a large prospective study of physically active adolescent girls, stress fracture incidence was found to have an inverse relationship with serum vitamin D concentrations. In adult female Navy recruits monitored during an 8 week training programme, those on vitamin D supplementation had a 20% reduction in stress fracture. However, oestrogen status was a more powerful risk factor at 91% in those recruits reporting amenorrhoea. Vitamin D is, itself, is a steroid hormone with range of systemic effects. As will be discussed below, its interaction with the sex steroid oestrogen has an important effect on bone turnover.

Although sanatoriums, for those suffering with tuberculosis, were based on providing patients with fresh air, any beneficial effect was probably more due to vitamin D levels being boosted by exposure to sunlight. Certainly there are studies demonstrating the inhibitory effect of vitamin D on on slow growing mycobacteria, responsible for TB. What about the influence of vitamin D on other types of infection? In a recent publication, evidence was presented that supplementation with vitamin D prevented acute respiratory tract infections. This effect was marked in those with pre-existing low levels of vitamin D. In a study of athletes a concentration of 95 nmol/L was noted at the cut off point associated with more or less than one episode of illness. In another randomised controlled study of athletes, those supplemented with 5,000IU per day of vitamin D3 during winter displayed higher levels of serum vitamin D and had increased secretion of salivary IgA, which could improve immunity to respiratory infections.

There is evidence that supplementing vitamin D3 at 4,000IU per day has a positive effect on skeletal muscle recovery in terms of repair and remodelling following a bout of eccentric exercise. In the longer term, dancers supplemented with 2,000IU over 4 months reported not only reduction in soft tissue injury, but an increase in quadriceps isometric strength of 18% and an increase of 7% in vertical jump height.

No hormone can be considered in isolation. This is true for the network interaction effects between the steroid hormones vitamin D and oestrogen. In a study of professional dancers, there was found to be significant differences in serum vitamin D concentrations in dancers from winter to summer and associated reciprocal relationship with parathyroid hormone (PTH). In situations of vitamin D deficiency this can invoke secondary hypothyroidism. Although low levels of vitamin D were observed in the dancers, this was not a level to produce this condition. However, there was an increase in soft tissue injury during the winter months that could, in part, be linked to low vitamin D levels impacting muscle strength.

The novel finding of this study was that female dancers on the combined oral contraceptive pill  (OCP) showed significant differences, relative to their eumenorrhoeic counterparts not on the OCP, in terms of higher levels of vitamin D and associated reductions of bone resorption markers and PTH. The potential mechanism could be the induction by the OCP of liver enzymes to increase binding proteins that alter the proportion of bound/bioactive vitamin D.

This interaction between steroid hormones oestrogen and vitamin D could be particularly significant in those in low oestrogen states such as postmenpoausal women and premenarchal girls. Menarche can be delayed in athletes, so is there a case for vitamin D supplementation in young non-menstruating athletes? What is the situation for men? Do testosterone and vitamin D have similar interactions and therefore implications for male athletes with RED-S, where testosterone can be low?

Vitamin D is not simply a vitamin. It is a steroid hormone with multi-system effects and interactions with other steroid hormones, such as sex steroids, which are of particular relevance to athletes.

The effect of 14 weeks of vitamin D3 supplementation on antimicrobial peptides and proteins in athletes J Sports Sci. 2016

The influence of winter vitamin D supplementation on muscle function and injury occurrence in elite ballet dancers: A controlled study Journal of Science and Medicine in Sport 2014