The main medical issue at the World Cup 2018 in Russia thus far has, not surprisingly due to the media coverage, been the management of concussion. The 2017 Concussion in Sport Group (CISG) consensus statement1 describes Sport Related Concussion as a traumatic brain injury induced by biomechanical forces with several common features.

The rather bewildering treatment given to Moroccan player Noureddine Amrabat pitch side following his concussion in the match against Iran, and the decision allowing him to play 5 days later against Portugal requires some scrutiny. His concussion was very evident to those watching: loss of consciousness, tonic posturing, and clear ataxia. It seems inconceivable that he would be fit to play in a further game only 5 days after this, if following proper concussion GRTP protocols. His wearing of a ‘scrumcap’ in his return to play is also questionable, as there is no convincing evidence that soft headwear will protect against concussion.2  The Moroccan Manager Herve Renard described him as a “warrior”.

There has been much outrage regarding these decisions, including an angry response from FifPro the player’s union, but rather than direct purely criticism towards the Moroccan FA and their medical team, perhaps it would be more beneficial if this case could result in ensuring greater education for medics and possible changes to FIFA regulations.

The main issues arising from the Amrabat case (and many other cases of concussion in professional football) I believe are:

We need to ensure that all medical teams working in professional football (and all sports for that matter) are using evidence based medicine and are aware of the significance of concussion, and with it’s recognition and subsequent management. Only then will we ensure player welfare is taken seriously. 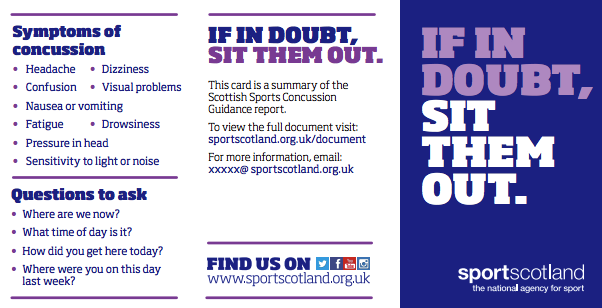 Jeff Cullen is a GP and Sports Doctor based in Selkirk, Scottish Borders. He is Team Doctor for the U16 and U17 Scotland teams with the Scottish Rugby Union, and is also club doctor for local amateur rugby team Selkirk RFC. He is also a medical contractor for the Scottish Football Association.