No, this isn’t a blog tribute to Lou Reed.

Instead, we are honouring the special issue of BJSM this June, which marks the 21stanniversary of the publication of the review Walking to Health by Morris and Hardman. This seminal paper began to shift the focus of research away from vigorous-intensity ‘exercise training regimens’ and towards a population health-based approach which promoted moderate-intensity physical activity – in particular, the seemingly mundane activity of walking.

Walking is perhaps the cheapest and most accessible type of physical activity for the general population and for those with chronic disease. And when used for transportation, walking also reduces carbon emissions and contributes to a healthier planet.

Globally, how do our stats stack up? Recent physical activity datafrom 717,527 people across 111 countries, in which step count was measured using smartphones with in-built accelerometry, showed that the average user walked 4,961 steps per day – less than half the recommended 10,000 steps per day1.

To celebrate three decades of multidisciplinary and cross-sector research on walking, we bring you some highlights from articles included in this issue of BJSM, which is dedicated to Walking and Health. This special issue was put forward by Professor Marie Murphy from Ulster University and her colleagues Dr Charlie Foster (Bristol), Dr Elaine Murtagh (Limerick), and Dr Paul Kelly (Edinburgh) to coincide with London hosting the International Society of Physical Activity and Healthconference.

Humans have been walking for the last four million years – what’s new?

Cross-sectional studies show that aspects of the built environment – such as the walkability of a neighbourhood, access to green space, and safety from crime and traffic – have a greater influence on walking behaviour than you might expect. In their systematic review of both prospective and retrospective longitudinal studies, Ding and colleagues build on this body of evidence, identifying a promising association between change in walking behaviour and relocating to another neighbourhood that differs in pedestrian friendliness and access to public transport2.

In their editorial3, Hunter and colleagues highlight another factor that is rarely taken into account when promoting walking – that of social norms and networks. The authors point out that walking is also a social behaviour, influenced by the people around us and what is considered acceptable by society. If interventions could utilise the existing social structures in schools, workplaces, and public spaces, we may have a cost-effective way of producing and maintaining walking behaviour, and “scaling up” interventions to population level.

Our understanding of the benefits of walking on mental health remains incomplete, in particular for outcomes such as psychological stress, social isolation and loneliness, and resilience. Kelly and colleagues found in their scoping review sufficient evidence for walking in the prevention and treatment of anxiety and depression4, and there appears to be additional benefits from walking outdoors than indoors on a treadmill.

The big question: how much walking, and how fast?

Is there a dose-response relationship between more walking and health outcomes such as cardiovascular disease (CVD) risk and mortality?

In a pooled meta-analysis of 37 randomised controlled trials involving over 2,000 participants, Oja and colleagues found that walking interventions had a favourable effect on seven CVD risk factors, including fasting glucose, blood pressure and body mass index5. However, no dose-response associations were observed between CVD risk and the frequency, bout duration, intensity and volume of walking training. The authors suggest that any dose of walking within the range of the included studies – approximately 100 to 1300 MET-minutes/week of walking – is likely to improve CVD risk in inactive individuals. This roughly equates to 35 to 435 minutes of walking per week at an average pace.

Analysis of 50,225 walkers from 11 British population cohorts revealed that increasing walking pace may be a strategy for reducing mortality risk, particularly when it is not possible to increase the frequency or duration of walking. Compared with reporting walking a slow pace, walking at an average pace was associated with a reduced risk of all-cause and CVD mortality, with the greatest mortality benefit observed in those who reported walking at a fast pace6.

How fast is fast enough, you may ask?

In their narrative review of 38 observational and intervention studies, Tudor-Locke and colleagues propose that a cadence of – drum roll, please! – 100 steps per minute corresponds to moderate-intensity physical activity for most adults7. Establishing a cadence value for the most health-enhancing intensity of walking will help clinicians to better prescribe walking training, and researchers and policy-makers to evaluate the effect of walking interventions.

An even bigger question: How do we achieve more walking?

Unfortunately, Foster and colleagues point out in their systematic review that here we have a classic example of the inverse evidence law, the situation where “we know least about the effects of interventions most likely to influence the health of the largest number of people”. What works to promote walking at the population level, for whom, how well and why, remains largely unevaluated.

Based on their review of 12 studies, the authors suggest that a combination of mass media, community initiatives, and environmental change may be key for increasing walking across recreational and transport domains at a population level8. However, evaluating these large-scale approaches to promote walking is fraught with practical and political challenges. How do we evaluate the effectiveness of an intervention when its implementation lies mostly beyond scientific control?

But we do know what we need: (1) better health surveillance systems, and (2) cross-sectoral action at community, national and international levels. The National Walking Strategy for Scotland, for example, was a government-led, cross-sectoral initiative that targeted each of the seven best investments of physical activity9. The program succeeded in getting more people in Scotland walking more often, contributing to a 13% increase in population-level recreational walking over six years.

Two step forwards, one step back?

The comprehensive update of walking and health in this special issue of BJSM showcases the substantial progress, but also some important gaps, in setting population health targets for walking, promoting walking across the lifespan, and continuing Morris and Hardman’s vision of an “active society”. The celebration of this anniversary could not be more timely: on June 4, the World Health Organisation launches the Global Action Plan for Physical Activity(GAPPA), in which walking has a particularly prominent place.

We hope you will engage with the work included in this special issue, and take a moment to walk in both the literal and figurative sunshine. 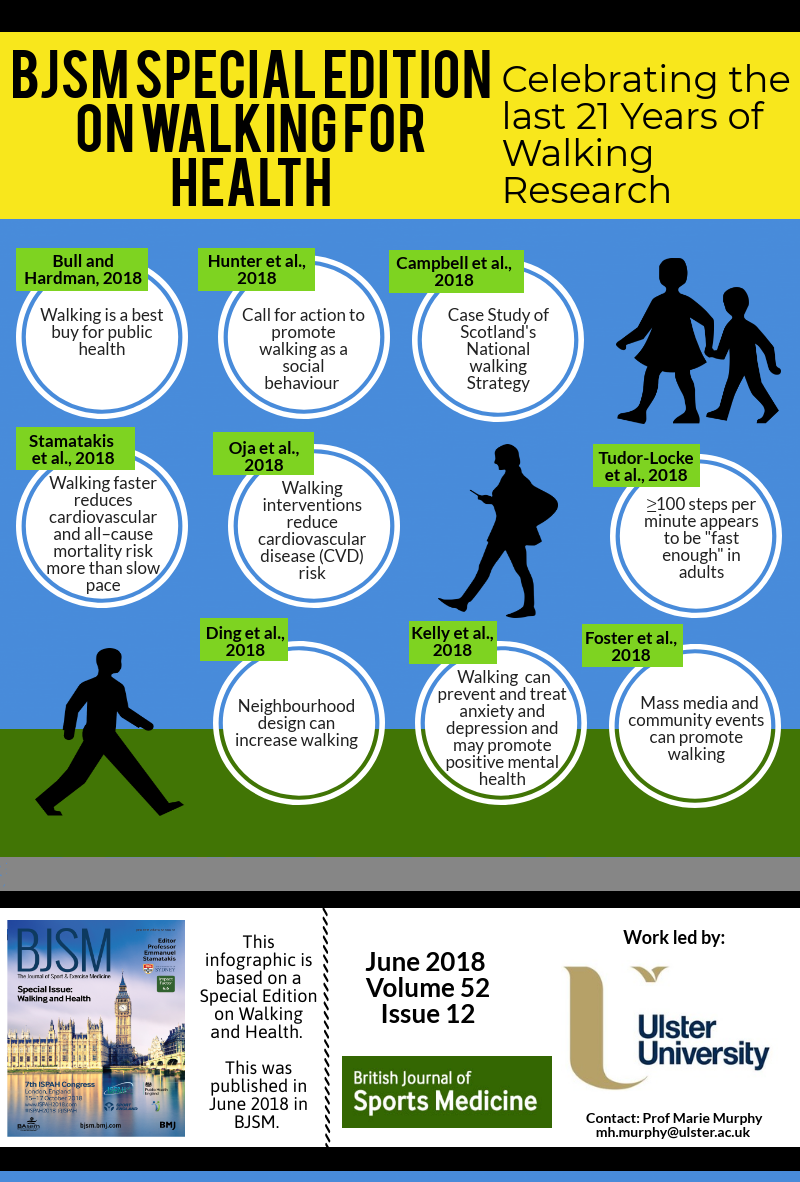