Blood flow restriction training (BFRT) has been shown to increase muscular strength and hypertrophy using loads less than half of what’s recommended by the ACSM (>60% of 1RM) (1). The proposed mechanisms for BFRT include metabolic accumulation (2-5); fast-twitch muscle fibre recruitment (6,7); increased protein synthesis through the mammalian target of rapamycin pathway (8); and cell swelling (9).

Increasing muscular strength and size would be advantageous for most, if not all clinical population groups in my opinion. Especially since heavy lifting (>60% of 1RM) is contraindicated for most painful conditions or until the end stage of rehabilitation. The evidence supporting BFRT in healthy subjects is substantial, and growing. Current research, suggests the training guidelines below.

BFRT has also been shown to be as safe as traditional resistance exercise (10,11), however little evidence exists regarding BFRT on clinical populations (12-17). Therefore the ‘jury is still out’ on its effectiveness and safety in clinical and post-operative populations, where it may be most beneficial.

I will briefly discuss the evidence of BFRT on clinical populations. In a case report, a body builder suffered an osteochondral fracture and was able to continue training and compete using elastic wraps to perform BFRT (12). Radiographs indicated that the bone had healed suggesting that this type of training may also benefit bone healing. However the subject was not tested pre and post this intervention for changes in muscular strength or hypertrophy, and the osteochondral fracture may have healed regardless of therapy. A case study was also conducted using BFRT with pneumatic cuffs post ACL reconstruction (13). The authors showed BFRT attenuated muscle loss that is associated with this procedure. They also found significant improvement in functional outcomes and thigh girth measurement 3 months post surgery following 12 weeks of BFRT during immobilization and also 10-30% of 1RM. A BFRT randomized controlled trial (RCT) after ACL reconstruction was also conducted (14). 44 subjects were randomized into a BFRT group and a control without restriction. Both groups followed the same training schedule. Knee extensor and flexor torques 16 weeks post surgery showed a significant increase in muscular strength in the BFRT but not the control. Also quadriceps cross sectional area showed a statistically significant enlargement in the BFRT group, as compared to control.

A case series of the effect of BFRT on seven patients who suffered from chronic traumatic injuries ranging from ankle instability to explosive wounds who had previously failed conventional rehabilitation, also was assessed (15). They found peak torque, average power and total work all improved significantly after 6 weeks of BFRT shown in the graph below. 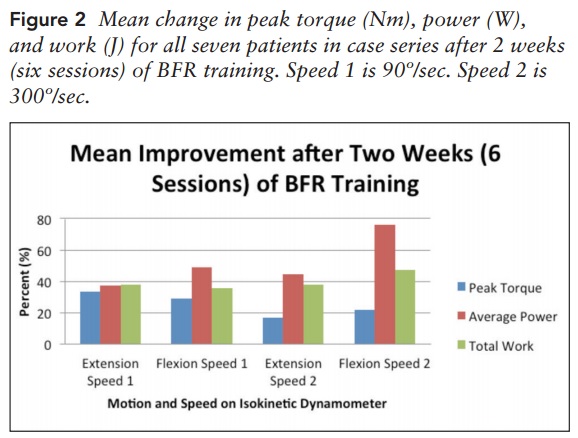 A RCT performed on female knee OA patients, randomized to a high intensity training (70% of 1RM) (HIT) or BFRT group (30% of 1RM) for 6 weeks (16). They found both the BFRT and HIT groups had significant improvements in function (Lequesne and TUG test), pain and strength, but there was no differences between groups. However the BFRT group experienced significantly less anterior knee pain during the exercise sessions. BFRT (30% of 1RM) for 12 weeks, has also been assessed in polymyositis and dermatomyositis patients (17). They found the BFRT was effective in significantly increasing the maximal dynamic strength, timed-stands, TUG and quadriceps hypertrophy. Importantly, no clinical evidence or any other self-reported adverse events were found.

These results are very promising, however, no control group was used so it is unknown if a low intensity strength program would have been effective without a BFR stimulus.

Substantial evidence supports BFRT’s use in increasing muscular strength and size in healthy adults when combined with low intensity resistance training (10-30% of 1RM). The evidence supporting its use in clinical populations is limited but shows promising results.

If increasing muscular strength is your aim of treatment and your patients are unable or contraindicated to lift >60% of 1RM, then BFRT is a viable option. However more research in different clinical populations especially RCT’s is needed to assess if low intensity resistance exercise to fatigue without BFR causes similar results. Future research on BFRT should clarify if this method of training is valid, reliable and safe for clinical populations and during home exercise plans.