Recently the combined American Heart Association / American College of Cardiology (AHA/ACC) taskforces defined eligibility and disqualification recommendations for competitive athletes with cardiovascular abnormalities [1]. In this blog we discuss the recommendations of the task force concerning hypertrophic cardiomyopathy (HCM). HCM is the most common non-traumatic cause of sudden death in young competitive athletes [2]. HCM is also a common genetic heart disease, occurring in at least 1 in 500 people in the general population [3]. The diagnosis HCM is usually based on a typical and homogenic clinical phenotype; left ventricular (LV) hypertrophy without chamber dilatation in the absence of another cardiac or systemic disease capable of producing the magnitude of hypertrophy [4, 5]. The biggest challenge in counseling these patients may be the genetic heterogeneity of the disease. Over 1500 mutations from at least eleven major genes are described in HCM [6]. Potentially all unique genetic mutations behave different, leading to a rather complicated risk stratification strategy and counseling of athletes.

An additional risk factor for sudden cardiac death in HCM patients is high intensity competitive sports. High intensity activities cause physiological stress and have an unpredictable interaction with the underlying electrophysiological substrate. The interaction is possibly influenced by alternations in hydration, blood volume, electrolytes, as well as cathecholamine surge [1].

A new patient population is emerging, due to an increasing number of HCM family members which are diagnosed with documented disease causing mutations but without the clinical HCM phenotype [6]. Conversion to LV hypertrophy occurs most often in adolescence, but has also been observed in midlife and beyond [9, 10]. The difficulty is that the onset of hypertrophic growth is unpredictable and usually not accompanied by cardiac symptoms. But when LV hypertrophy is present, the patient may theoretically be subject to an unstable HCM electrophysiological substrate [1].

The abovementioned remarks and influencing factors indicate the difficulty to apply conventional risk-stratification strategies and to advise competitive athletes accordingly. Therefore, the AHA/ACC task force states that conservative and prudent recommendations regarding sports eligibility apply across the broad HCM disease spectrum and they come forward with four recommendations (table 1). 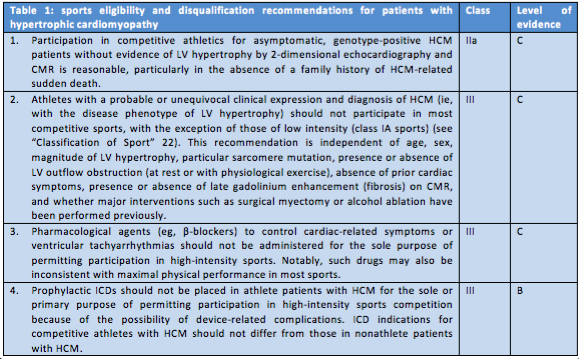 The recommendations stated in the table are rather black and white, while counseling of athletes is often more of a grey zone. According to recommendation 1, an asymptomatic, genotype-positive HCM patient without evidence of LV hypertrophy may be allowed to participate in competitive sports. An important addition however, is that the physician must agree with the athlete on the follow up frequency and modalities, as the physician should not miss an asymptomatic conversion to LV hypertrophy, because this could be subject to an unstable HCM electrophysiological substrate.

In these AHA/ACC statements the allowed sports intensity is limited to class 1A sports, corresponding with sports such as bowling, curling and golf. One may think that a slightly more liberal policy with appropriate follow up should be possible. Sports with a high static component cause high cardiac pressure load. This can result in cardiac hypertrophy and in that case may accelerate the HCM process in this patient group. Although it is not a dichotomous concept, sports with a predominant dynamic component cause pressure load in a lesser extent and therefore may be allowed in some HCM patients [11].

Statement 4 regarding the use of prophylactic ICD’s is quite clear. These devices should not be implanted for the primary purpose of permitting participation in high intensity competition. However, no statement is made for HCM patients who did receive an ICD because of a high risk profile. Again a more liberal policy on sports with a more dynamic component may be considered.

Key point in the counseling of athletes with HCM is to give advice tailored to the individual and to perform proper follow up in order to assess the myocardial consequences of the level of activity. In this way the patients’ policy can be adjusted in accordance to the progression of disease. A fully informed athlete who is at low risk on forehand should be enabled to play a role in shared decision making. However, final decision should always be in concert with all engaged parties, including the physician.

*****************
Tijmen van Assen, MD PhD is a resident in sports medicine at the University Medical Center (UMC) in Utrecht. Before the start of his residency, he conducted his PhD studies on the Anterior Cutaneous Nerve Entrapment Syndrome (ACNES), a frequently overlooked abdominal wall pain syndrome due to an entrapment of anterior cutaneous branche of the intercostal nerve (see for pdf: https://cris.maastrichtuniversity.nl/portal/files/1660458/guid-3f3497bc-c111-4c6a-be61-b9425761dc4c-ASSET1.0)

Prabath Lodewijks, MD, is a sports physician in the University Medical Center (UMC) in Utrecht. He is also the team physician of FC Utrecht, a professional football team playing in the Dutch Eredivisie, the highest league of The Netherlands.