Here is the second instalment of the exciting #RTP2015 highlights. In case you missed our first blog you can find it HERE. And let us remind you that you can view all the presentations HERE.

Linked to the last take-home point of #TimeHeals, and a main RTP issue, is atrophy. Nicola Maffiuletti explained how large, fast muscle fibres are the last to be recruited and are therefore hard to train during impairment, which in turn leads to their atrophy. He also outlined a number of ways to combat this during rehab:

Part of normalising sensory feedback is to constantly surprise the nervous system with new and varying stimuli. However, we should be careful not to descend into ‘circus training’ with our athletes. Stephen Mutch described the difficulties of finding this balance whilst showing us some of the amazing movement patterns performed by his rugby players.

The points regarding muscle and rapid activation were interesting as a basic tenant of strength and conditioning programming is that the whole of the force-velocity curve needs to be trained. Yet despite this, how often can a therapist genuinely say that they cover both ends of the curve in their RTP plan? 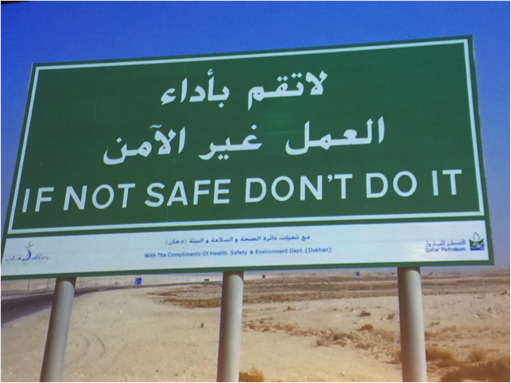 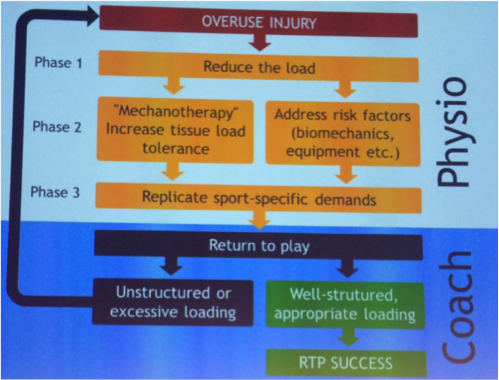 Ben Clarsen (@BenClarsen) demonstrated that overuse injuries result from a fluctuating pattern of overload rather than a single event. Overuse injuries are often blamed on an internal (anatomical) or an external factor, but in many cases the reason is overloading and insufficient recovery between training sessions, leading to reduced resilience.

Again we come back to the equation Injury = Load>Capacity emphasised by Glasgow, Mutch and Shrier. Maurizio Fanchini provided a case study of a footballer recovering from Achilles tendon repair;  including easier periods in the program was necessary for recovery. Load management is a huge topic (see @TimGabbett) and the Theme for the 2nd International Congress in Sports Physiotherapy in Belfast October 2017. (@BJSM_BMJ is one way of getting first, and regular, conference updates).

To avoid making the same mistakes when returning to sport, many speakers agreed that it is crucial to involve coaches. Whilst medical staff tend to have a large say in regard to RTP, coaches are considered experts in sport specific movements and demands, and play a key role in designing a well-structured training programme. It is therefore important to involve coaches in the RTP decision, which loops us again to Phillip’s initial questioning of how the RTP decision is made and by whom.

McGill University’s Professor Ian Shrier (who is also teaching a Massive Open Online Course, MOOC, google it!) spoke passionately about the need for RTP to be individualised for every athlete and that risk is counteracted by risk tolerance – with some people willing to accept greater risk than others. The risk they are willing to take can be affected by the rewards for deciding to play and the decision should never purely be based on medical factors. Dr Boris Gojanovic @DrSportSante showed a model of the interactions between the parties involved in the RTP decision. 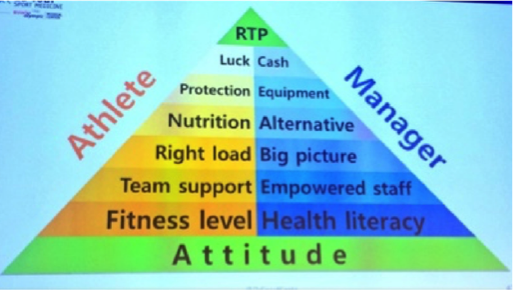 One point that was agreed by all at the event was that the athlete has to be a central part of the RTP decision. The one exception to this rule is with a concussed athlete, who sometimes needs to be protected from him/herself, as pointed out by Tony Schneiders.

One question athletes, coaches and clubs will ask as soon as there is an injury is how long will it take to RTP? Abstract award winner Arnlaug Wangensteen presented her paper on whether MRI helps in predicting time to RTP in hamstring injuries and the answer was a resounding no.

The consensus statement is in progress under the guidance of Dr Clare Ardern (@Clare_Ardern) and Dr Mario Bizzini and (@SportfisioSwiss) will be published in BJSM in July 2016.

Save the dates (‘October’) for the 2017 2nd International Sports Physiotherapy Conference in Belfast.  To close, a huge thank you for such a great conference must be extended to the organising committee and particularly Mario Bizzini, Stephan Mayer and Nicolas Mathieu.

David McFall is a Sports Therapist working in Pforzheim, Germany. He can be contacted via Twitter: @DynamicSCT or e-mail: info@sct-pforzheim.com