November’s Return to Play (#RTP2015) Conference in Bern, Switzerland, saw a stellar line-up of speakers engaging with >800 well-informed clinicians and researchers from over 50 countries. BJSM will publish a consensus statement in July 2016 ( and you can watch all the presentations here: http://www.sportfisio.ch/rtp2015-videos-2/!). In the meantime, here are highlights and talking points:

Nicola Phillips from the IFSPT, opened the conference. She reported on a recent survey on aspects affecting the RTP decision, mainly based around Creighton et al’s (2010) model (#KeyReading). The survey looked at the perception and implementation of the RTP modifying factors and interestingly there were many differences according to both sport and country – especially in regard to who actually makes the RTP decision.

This talk set the scene for the conference; whilst each speaker would focus on a specific injury type, they would always relate to the general RTP setting, constantly coming back to Creighton’s model and Ian Shrier’s StARRT framework, from which many common themes emerged.

Clare Ardern introduced the first of these common themes. She spoke about the RTP rates following an ACL injury and the crucial role that psychological factors play in a successful RTP. These points were reinforced by many others throughout the day. There were some stand-out quotes which made a huge impact on social media:

One of the most salient points of the day was the demonstration of the ACL_RSI questionnaire, available as an iOS app for easy clinical implementation, which can be used to quantify psychological readiness to RTP.

Mark de Carlo demonstrated a criterion based RTP progression, and provided example time frames for when criteria can expect to be met. The topic of performance criteria and testing was expanded on by the following speakers. 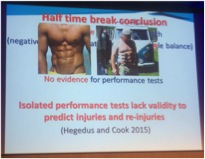 Both Witvrouw and Moksnes argued that no single test can determine RTP but rather we need to use a battery of tests. Symmetry in testing between the injured and uninjured side was an oft-quoted return criteria, usually with a 90% threshold, but as mentioned by Ardern & Ann Cools – where are the symmetry figures for non-injured athletes? Benchmarking against others of a similar age, level etc. is useful, but do we have valid/reliable measurement tools for this? 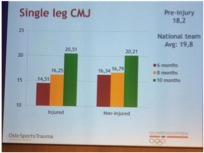 When symmetry is reached there is a further point to consider, that in many cases the pre-injury level of coordination/endurance/strength/skill was not good enough – the athlete got injured. We therefore need to return them to sport better than they were and closer to what could be considered appropriate/above their level of participation. Similar points were made by Phil Glasgow, Stephen Mutch and Ian Shrier: injury occurs when load is greater than capacity and that we therefore need to improve an athlete’s load tolerance to reduce their injury risk. However, as Mutch showed in his entertaining videos sport can be highly unpredictable, so how do we train for these complex, reactive and often unforeseeable movement patterns? 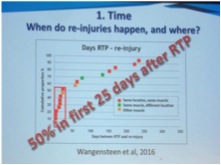 We heard a lot about various RTP criteria over the course of the conference but Erik Witvrouw also importantly commented that we must not forget the issue of time, and that tissues need time to heal. He showed scans that demonstrated that knee cartilage was incompletely healed at RTP following an ACL injury. To reinforce this point, Mosksnes stated that from 6-9 months post ACL injury, the risk of re-injury is reduced by 24% for every month RTP is delayed. Similarly, Wagensteen (more on her in part 2!) presented evidence that 50% of hamstring re-injuries occur within 25 days of RTP. So even though the pressures may be enormous, delaying RTP and providing some time for further healing may be worth it in the long run!

Keep your eyes out for Part 2 in the next few weeks. For further highlights, you can see the tweets from the conference by Twitter-searching #RTP2015

David McFall is a Sports Therapist working in Pforzheim, Germany. He specialises in strength and conditioning as part of the RTP process and also provides competition/pitch-side support to teams and events. David has worked with professional rugby since 2006 and is a World Rugby certified Medical Educator. He can be contacted via Twitter: @DynamicSCT or e-mail: info@sct-pforzheim.com