The Faculty of Sports and Exercise Medicine in Ireland (@FSEM_IRL) began their 3rd successive Structured Educational Programme (#SEMSEP) this past November. The #SEMSEP is comprised of 4 half-day seminars on current topics. Two seminars took place in 2015 (the first on Concussions and the second on Cardiology in Sport). 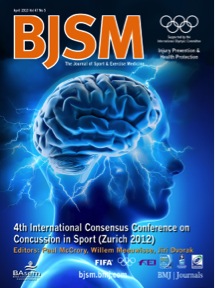 What can you expect from this education? As one example, we summarize the highlights from the 2015 session on concussions

Concussions have recently been a top focus for sports physicians and the general public alike. Following the rugby world cup, but prior to an upcoming Hollywood film, and an international consensus conference on concussion, @FSEM_IRL began their educational programme on this topic.

Dr. John Ryan (@ryanjtw), Associate Professor in Emergency Medicine and Leinster Rugby team doctor, began the morning by describing his experience running a concussion clinic and return-to-play for athletes. Professor Michael Molloy spoke from personal and clinical perspective in rugby, highlighting the change in the biomechanics at the ruck and greater transfer of force. He also echoed calls for weight/size based stratification of players versus age based approach and the potential for jersey design where a delineation exists between the area considered a high tackle, in order to minimise the risk of head injury.

Dr. Adrian McGoldrick, CMO of the Irish Turf Club, spoke from his extensive experience in horse racing. He described atypical head injuries resulting from a torsional (twisting) force being exerted using the case of an ejected jockey. Commenting on the potential relationship with regards Chronic Traumatic Encephalopathy (CTE), he noted the absence of a large group of former jockeys presenting with characteristic symptoms despite the highest reported incidence in the literature.

A short discussion followed where Medical Director of the IRFU, Dr. Rod McLoughlin, addressed a common misunderstanding of the Head Injury Assessment protocol. He described the ‘sports issue’ of recognizing a suspected head injury and removing the player from play. Whilst SCAT3, mobile applications and potential pitch side biomarkers can be useful in acquiring that suspicion, they should not be used to justify a return to play or out-rule an existing suspicion. The ‘medical issue’ of diagnosis and management of a player who has suffered a head injury can proceed later.

The post coffee-break session began with Dr. Colin Doherty (@gastaut) introducing a new Dublin based Concussion Research Interest Group. Dr. Eugene Wallace provided a description of the neuro-metabolic cascade following concussion and the concerns over ‘test-retest reliability’ in existing biomarkers. He reminded the audience of the many confounding factors within the former NFL players as a study cohort, not least common opioid use and rates of depression/poor literacy. Dr. Niall Pender, touched on the potential psychosocial factors in concussion and suggested a changed in vernacular. The use of the term ‘mild Traumatic Brain Injury’ in place of concussion has it’s advantages, not least, a previously established relationship with dementia. Dr. Matthew Campbell (@mattcampbelltcd) revisited the fundamental physiology, considering the delicate relationship between vascular supply to the brain, the blood brain barrier and the potential role of claudin-5 protein. Professor Jim Meaney concluded the afternoon with a review of the medical imaging technologies with a potential to be utilised in concussion.

The session was a fantastic educational tool for all levels of healthcare professional and students. In providing clear, up-to-date, expert led information; @FSEM_IRL is pre-eminently working towards some of the recommendations set out by Mrazik et al.’s recent review of concussion education in the fresh edition of the BJSM.

Looking forward to the 2016 Educational Programme

The high caliber of instruction and discussion will continue into the seminars we have lined up for 2016:

All sessions take place on Saturday mornings in the Royal College of Surgeons in Ireland, Stephen’s Green. They are aimed at doctors, physiotherapists, healthcare professionals. Importantly there is a heavily discounted rate for students!

This programme is an accessible gateway to sport and exercise medicine (SEM) for undergraduates and covers topics not encountered on clinical rotation or during lectures. For those with an interest in SEM, the #SEMSEP represents a fantastic opportunity to network and springboard into a rewarding career path. For others, it provides a novel context in which to consider your regular clinical presentations and pathologies. Consider this your call to action…

For further information; see the linked flyer or tweet @FSEM_IRL

Giza, C. C. et al. Summary of evidence-based guideline update: Evaluation and management of concussion in sports Report of the Guideline Development Subcommittee of the American Academy of Neurology. Neurology 80, 2250–2257 (2013).