As part of my Sport and Exercise Medicine training I attended the 2015 International Ice Hockey Federation Women’s World Championships, Division II A, held in Dumfries this April. This was my first experience both of travelling with a national team and working with a female winter sports squad. It certainly lived up to my expectations and more! 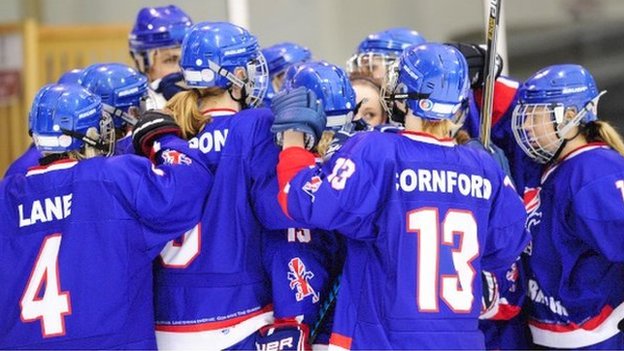 Women’s Ice hockey is an amateur sport in this country; our Great Britain squad ranged in playing experiences, providing me both with the biggest challenge and greatest opportunity to learn. A handful of players had moved abroad with their university studies to experience playing in Sweden and Canada, whilst the majority are based in the UK normally training and playing only once a week, for clubs with no to very basic medical support.

The World Championships are a round robin tournament, formed of six teams including Great Britain, who won silver in 2014, Kazakhstan. They had been relegated from the division above while Croatia, South Korea, Poland and New Zealand, had been promoted from the division below. This format presented both a physical and mental test to the squad, and it was our aim as the medical team to ensure as many of the players remained fit to play across all five matches in seven days. In order to combat this we introduced ice baths post heavy practice sessions and matches from the outset of the tournament. For most this was a completely new concept and although we were not liked by the squad at first, within days the players recognized the benefits and by the end of the week I think we had converted them all!

“Off the ice” health challenges

Unfortunately, it was sickness off the ice which kept me most busy during the tournament. As many team doctors have experienced I’m sure, gastroenteritis can spread like wild fire! We faced the added challenge that squad members sharing hotel rooms, but we also shared the hotel with one of the other countries in the competition and the tournament officials.  So not only were squad members sharing bathroom facilities and changing rooms, they were also exposed in the self-service restaurant and transportation to and from the hotel. I highlighted basic hygiene techniques within the team meeting setting at the first sign of gastroenteritis affecting a player and was able to source multiple single isolation rooms at the hotel. Given that the tournament was being held in Scotland, I had sufficient access to a well-stocked medical bag in order to manage each patient’s symptoms appropriately.

Giving back to sport for women and girls

During one of the rest days, a ‘Learn To Play’ event had been organized where local school girls attended a one hour session full of basic ice hockey skills stations. Members of the Great Britain squad instructed the girls as they went around the stations. It was clearly a successful event with the children leaving full of memories and the players feeling good having given something back to both the local community and sport itself.

The squad were successful in winning a silver medal at the championships. Their disappointment at the time, may serve to further fuel proactive  changes and development in the sport. I would encourage anyone working in the field of Sport and Exercise Medicine to get involved with winter sports, particularly women’s ice hockey: it is an exciting, high impact, highly skilled game where women’s participation is on the increase; there is the need and demand for medical team support within the club structure. It provides additional challenges to pitch-side care when the field of play is an ice rink – I managed not to be an additional casualty!

A systematic video analysis of National Hockey League (NHL) concussions, part I: who, when, where and what?

Dr Philippa Turner, a Sport and Exercise Medicine Registrar in the East Midlands. I am currently working as the Aston Villa Women’s team Match Day Doctor, FA Super League Division 2. I’m a keen netball player, having previously played at the British University Games, and I am running the 2015 Virgin London Marathon for Asthma UK.

Dr Farrah Jawad is a ST4 doctor in Sport and Exercise Medicine and coordinates the BJSM Trainee Perspective blog.

Inclusion, fairness and non-discrimination in sport: a wider lens

Moving the needle: a call to action for sports injury and illness prevention researchers to embrace knowledge translation principles

Prevalence of and factors associated with osteoarthritis and pain in retired Olympians, with comparison to the general population: part 1 - the lower limb