On 17th  March 2015 The Institute of Sports and Exercise Medicine (The ISEM)) awarded the Prince Philip Medal to Dr. Richard Budgett OBE. This was presented by HRH Prince Philip, the Duke of Edinburgh who, in his role as Honorary Fellow of The ISEM, hosted the event at Buckingham Palace.  The event celebrated Dr. Budgett’s outstanding achievements and contributions to the field of sports and exercise medicine (SEM), in the presence of his family. This was only the third time this award has been presented since the establishment of The ISEM in 1958 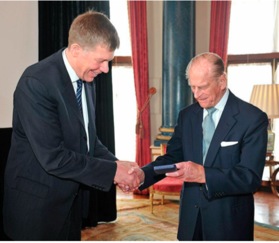 The Institute was established as a representative body for sport and exercise medicine before it was a recognized speciality, and was instrumental in this recognition. It aims to be the central resource for research, expert multidiscipinary and multiprofessional advice, and commentary and communication on important national and international issues in SEM, through the Fellows and Advisory Board. The aim at present is to focus on the role of physical activity both for preserving and maintaining health, as well as in the treatment of disease.

He was awarded an OBE in 2003 and was appointed lead physician for the South East region of the English Institute of Sport (EIS) based at Bisham Abbey. In 2005 he was appointed to the World Anti Doping Agency list committee. Elected to the council of the Faculty of Sports and Exercise Medicine in 2007, he was appointed Chairman of BASEM in 2008 and awarded the Fellowship of the Royal College of Physicians in 2011.

During the presentation, Dr Budgett outlined his work with the International Olympic Committee (IOC) in supporting the development of the Active Cities programme, which is focused on supporting those cities wishing to increase physical activity levels within their populations. Inactivity is the greatest public health concern in industrialised countries, and the UK government spends £10 billion per year in lives lost, directly linked to this.  Despite this, and the knowledge that physical activity is beneficial to the physical, mental and social quality of life, a quarter of the adult population in the UK, are classed as physically inactive. The IOC’s support for this programme, the UK’s epithet of ‘the lazy man of Europe,” aims to change this in the future.

The guests were from a wide range of backgrounds. Beyond just medicine, they represented charities, academia, industry and politics. Among them were Sir Phillip Craven, President of the International Paralympic Committee, Dame Tessa Jowell, who was integral to the process of bringing the 2012 Olympic Games to London, and Kevin Cahill, Chief Executive of Sports Relief and Comic Relief. All were introduced individually to HRH Prince Philip who then recounted amusing episodes in his many years of equestrian activities and associated injuries. The day was very enjoyable and doubtless one which guests will remember for many years to come. In addition to the presentation, guests discussed the challenges of changing national and regional policies towards physical activities and sport, with a view to improving public understanding of sports and exercise medicine and its potential impact on patient outcomes.

Many congratulations once again, to Dr Budgett OBE both for his award and   his tremendous achievements and ongoing contribution to Sports and Exercise Medicine.

Dr Katy Hornby is an ST3 in Sports and Exercise Medicine trainee in London. Katy has a background of EM training, and works with the England Women’s and Rosslyn Park Rugby Team. She has recently been elected a board member of The ISEM. Her main interests lie in paediatric sports injuries and concussion.