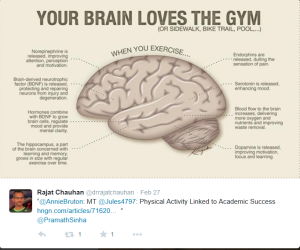 Each week over 23,001 folks are learning about the power of exercise via a Massive Open Online Course (MOOC).

Generously, BJSM helps out Professor Ian Shrier by answering one question each week on this blog. Prof Shrier just has to answer the other 23,ooo students’ questions.

This week’s question is:

“What are the effects of exercise on the brain’s ability for computation and memory?”

You could ‘Google it’ and you will find that the past 2o years has seen an explosion of literature on this topic. Fueled by? You guessed it – the wonder of MRI (magnetic resonance imaging) that provides structural images to complement tests of brain function (formerly pen and paper tests, now largely converted to computer/tablet tests). I don’t fully understand it yet, but MRIs can also show us changes in brain FUNCTION. So if exercise improves brain performance (which it does), some of these changes can be seen during ‘functional’ MRI of the brain. Wow!!  It used to thought that one exercised ‘for the heart’ but my feeling is that ‘exercise for the brain’ is even more important.

So, down to the nitty-gritty! “Show me the money” or, in this case – Show me the evidence! 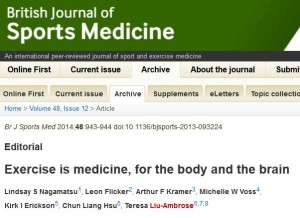 Exercise is Medicine for the Body and the Brain

Cognitive decline is one of the most pressing healthcare issues   of the 21st century. Worldwide, one new case of major cognitive decline (ie, dementia) is detected every 4 s. Given that no effective pharmacological treatment to alter the progress of cognitive decline exists, there is much interest in lifestyle approaches for preventing or treating dementia. Ideally, such strategies should be cost-efficient and widely accessible at a societal level to have the largest benefit for older adults with varying income and functional status levels.

One attractive solution is exercise. However, despite a large and consistent pool of evidence generated over the past five decades linking exercise to improved cognitive functions in older adults, there is a reluctance among academics, healthcare practitioners and the public alike to embrace exercise as a prevention and treatment strategy for cognitive decline. For example, the National Institutes of Health (NIH) consensus statement from 2010 concedes that there appears to be preliminary data to support the efficacy of exercise in improving cognitive function. However, they caution that there is currently no strong evidence to suggest that modifiable lifestyle factors can alter the trajectory of cognitive decline.

Adding fuel to the fire are publications such as a 2013 systematic review of randomised controlled trials (RCTs) (prior to 31 October 2011) reporting ‘weak’ evidence for the effects of exercise on cognition. However, the search strategy used in that systematic review failed to capture many pertinent papers providing evidence from RCTs that exercise promotes cognitive and brain plasticity not only in healthy older adults but also in those with cognitive impairment. Animal studies that provide insight into the molecular and cellular mechanisms by which exercise promotes neuroplasticity.

In a previous commentary,(Liu-Ambrose, BJSM 2009)  we outlined studies that provided compelling evidence that exercise should undoubtedly be considered as a promising treatment strategy for cognitive decline. Our present commentary aims to provide a brief update, as well as to discuss factors that have continued to hinder the adoption of exercise as a legitimate medical strategy for the prevention of cognitive decline and dementia.

Since 2010, we have additional evidence from RCTs that exercise, both moderate-to-vigorous intensity aerobic and resistance training, promotes cognitive and brain plasticity and have gained further insight into underlying mechanisms. Notably, the behavioural and mechanistic outcomes converge and support a cohesive picture. In 2011, Erickson et al demonstrated that aerobic exercise resulted in increased hippocampal volume in healthy community-dwelling older adults. Furthermore, changes in hippocampal volume in the aerobic exercise group were significantly associated with increased levels of serum brain-derived neurotrophic factor and spatial memory performance. In the same RCT, Voss et al  demonstrated that aerobic exercise also improved the functional connectivity or temporal coherence of brain regions that are functionally related in a network known to decouple with ageing.

For resistance training, Liu-Ambrose et al  demonstrated increased functional plasticity after 12 months of training with corresponding improvement in selective attention and conflict resolution in healthy older women. Critically, the benefits of exercise extend to those with mild cognitive impairment (MCI) and dementia. Among older women with MCI, Nagamatsu et al  demonstrated that 6 months of resistance training led to improved executive functions, spatial memory and associative memory with concurring functional plasticity. In the same study, the authors also found that aerobic training improved verbal memory and learning. These findings indeed support the findings from a recent systematic review on exercise and cognition in those with dementia, although to our knowledge no such systematic reviews exist for those with MCI.

Despite these recent positive findings, scepticism remains. Enthusiasm for increased exercise as a prevention strategy is often tempered by the fact that no RCT until now has demonstrated that exercise can actually reduce the incidence of MCI or dementia. Is the absence of such a definitive trial reason enough to disregard the evidence until now? We contend that the answer to this question is a resounding ‘no’ when the following points are considered:

In fact, exercise should be promoted as an essential component of healthy ageing given that reducing physical inactivity by 25% could prevent as many as one million cases of dementia worldwide.

Providing healthcare practitioners and seniors with specific and individualised recommendations regarding the type, intensity, and frequency of exercise for benefit is critical to successfully advocate exercise as a treatment for cognitive decline. (FOR MOOC STUDENTS, THIS IS WHAT PROF SHRIER WILL COVER NEXT WEEK – THE PRINCIPLES OF EXERCISE PRESCRIPTION)

However, we are limited by the fact that dose and type of exercise have been utilised in different studies with varying success. For example, Baker et al  found that older women with MCI who engaged in aerobic exercise four times per week exhibited improved cognitive function, whereas in a similar population, aerobic exercise twice per week did not yield the same benefits. Further, confusion centres around the type of exercise (eg, aerobic vs resistance training) and sex differences.

Evidence strongly suggests that exercise does have benefits for cognition—and critically, the magnitude of the benefit can exceed that of pharmaceutical approaches. It is estimated that if the onset and progression of dementia could be delayed by a mere 1 year, there would be nearly 9.2 million fewer cases in 2050. Given that exercise can be promoted at a population level with relatively low risks and costs, we highly recommend that older adults should be encouraged to engage in regular exercise to boost cognitive function as further research is concurrently conducted, rather than wait until all the intricacies of the relationship between exercise and cognition have been resolved.

We recognise that a large proportion of the population is sedentary and that successfully changing behaviour to a more active lifestyle is challenging. To effectively advocate exercise, we emphasise the need for a cross-disciplinary collaborative effort among researchers and healthcare workers to develop consistent standards and a united message of the multiple benefits of exercise. In light of the recent support for exercise in preventing cognitive decline, we stress that endorsing exercise as an effective strategy for improving health and well-being among older adults should be indisputable. Given that it may potentially have a high impact for mitigating multiple health concerns, including dementia, exercise should therefore be considered as a leading treatment strategy to delay or prevent dementia.

Thanks to BJSM for allowing us to reproduce the paper:

Exercise is medicine, for the body and the brain.

Karim Khan (@BJSM_BMJ)
One of the 3 lead editors at the BJSM – along with Babette Pluim (@DocPluim) and Jill Cook (@ProfJillCook).

If you use Google+, consider joining the Sports and Exercise Medicine community for sports medicine updates. (Search in ‘communities’ or follow this link).