“People remember dead babies,” not the most heart-warming of statements, but one that Professor Karim Khan used to illustrate a point in a recent presentation; point being that you will remember an emotional story or event more than a set of statistics. The audience at the FSEM and BASEM Walk 500 miles Conference will indeed remember his story.

People remember stories and not necessarily facts and data because people need to feel engaged and connected to what they are being told. If we are to effectively combat inactivity, we must remember to use stories and not just numbers.

However, sometimes numbers and stories can work together. For example, I am a story of numbers. 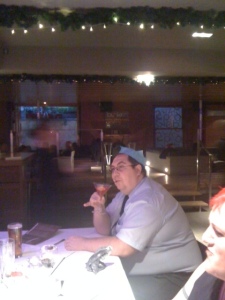 The first number was 354. That was the number of pounds I weighed on Jan 9th 2011. Fifty-two was the percentage of fat in my body and 58 were the inches in my waist. Zero was the amount of hours of daily activity I undertook while 5,600 were the calories I consumed daily. 1,000 was the number of times that friends, family and health professionals told me to lose weight. 12 were the times I had tried and failed.

One picture changed all this.

People say that a picture is worth a 1,000 words. This one picture left me speechless. It horrified me and I felt ashamed. How had I let myself become so unhealthy? How could I continue to ignore my increasing weight and how could I now succeed in losing weight when I had failed previously?

The answer lay in numbers. I am a Lean Practitioner. I look at processes and identify ways to continuously improve them. I measure all the metrics involved in delivering a service, identify waste and then opportunities to improve.

I decided to literally Lean My Life. I looked at my past mistakes to identify the root causes. I looked at what barriers lay in front of me and I learned and adapted my behaviours.

I identified that my efforts lacked consistency and that I followed plans that worked for others, but not necessarily for me. Using Lean, I used tools that helped me devise a way that worked specifically for me. 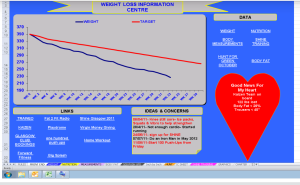 I designed a spreadsheet that I used to measure and evaluate my weight, my body fat, my daily steps, and my nutritional intake. It charted my progress and helped me identify what changes were working and which ones were not.

I adopted a ‘try everything’ approach, making one small change at a time, agreeing a review period, and measuring its effectiveness. Over time, the small steps and changes that I deemed successful became part of my daily life.

The biggest step was also the simplest of steps. It was to take more steps. I had measured that I was averaging below 3,000 steps each day against the recommended 10,000. I wouldn’t try and change that overnight and instead signed up to a Step Count Challenge. Over the course of 12 weeks I went from my lowly 3,000 steps to hitting 25,000 on most days. I walked 7 miles to work, I walked up and down the 22 steps in my house and I walked my 2 dogs several times a day.

I became a Step Count Champion, recruited my friends and colleagues and in 10 months I managed to lose 150 lbs. I regained my self-confidence, my health and my happiness. 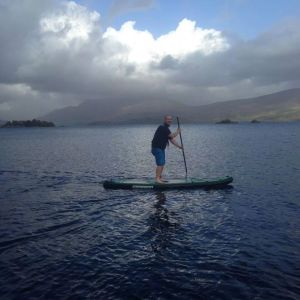 I also ran my first 26.2 miles earlier in the year. However the most important number in my life is 2. This is for the 2 little boys that have become part of my life and who now follow in my footsteps and are inspired by my stories of cycling up mountains and paddling in Lochs.

Stephen Morrison, 41, is a Lay Adviser to the Faculty of Sport and Exercise Medicine (FSEM). Since transforming his life in 2011, he has become a passionate advocate and ambassador for physical activity and active travel. He has become a “Try Athlete” and highly regarded blogger and commentator on physical inactivity and obesity issues, with various roles for several organisations, including Great Run, Fit in 14, Spogo and Man V Fat. He also charts his own experiences in his inspiring  http://howmanymiles.co.uk/ blog and can be followed on Twitter at @howmanymiles_