Golf is played by around 55 million people on 32,000 courses in over 100 countries.¹ With over half a billion homes worldwide tuning in for each day of the Ryder Cup at Gleneagles, a series pitting Europe’s best against the cream of the American crop. We look at the health benefits of playing golf available not only to Rory McIlroy and the game’s elite, but also to those inspired to visit their local course. 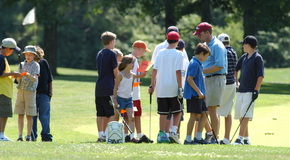 “Golf is the only game where the worst player gets the best of it. He obtains more out of it as regards both exercise and enjoyment, for the good player gets worried over the slightest mistake, whereas the poor player makes too many mistakes to worry about them.”

But what of the available evidence? Do golfers really live longer happier lives?

A landmark Scandinavian study² of over 300,000 golfers estimated they lived a remarkable 5 years longer than those who do not play golf, regardless of age, gender, or socio-economic status. Evidence also suggests that golf has a role in preventing and treating many chronic diseases, and has positive mental health effects.

A 2006 study³ found a mean of 11,948 steps are taken per 18-hole round, exceeding the commonly recommended daily amount of steps for health.  With technological advances coming into the game, calls have been made to reduce the use and availability of motorised carts to transport players around the course. Cart use reduces walking distance from an average 8+km to 3.86km per round.⁴

Another study⁵ found that walking 18-holes was the equivalent of moderate-high intensity exercise for the elderly, moderate for the middle-aged, and low for the young. A 1998 study⁶ determined that golf should be classified as a form of aerobic training for middle-aged people.

Golf suits participants of all ages, with people of mixed ability, sex, and age able to play together.  The Walker Research Group concludes: “golf is well suited for the development of social capital” with designated social spaces and natural breaks providing unparalleled socialisation opportunities and thus potential psychosocial benefit to participants of all ages⁷.

A 2006 study⁸ engaged children in non-traditional sports such as golf during extra-curricular time and found that such an intervention coupled with lifestyle activities such as walking, significantly increased physical activity in primary school aged children. This also slowed unhealthy weight gain.

In regards to gender inclusion, the recent news of women winning the right to R&A membership at St. Andrews after a 260-year wait, exhibits a positive step by the game’s administrators to quash these barriers and see more women playing and staying in the game9.

There is clear evidence that regular physical activity, in the form of golf, increases life expectancy.  And although Lloyd George was correct that the benefits can be accrued by players of all abilities, research suggests that low handicap players tend to play more often and have the lowest mortality rates.  Encouraging friends, family, and patients to take part in regular physical activity is time well invested, and golf can offer significant benefit to Joe and Jane Public and Rory McIlroy alike.  Just don’t hire a buggy!