Obesity is becoming a major public health issue in the Middle East and in other developing regions. Estimations of overweight or obese individuals include: 42.2% of Kuwaiti adolescent males and 42.4% of Bahraini adolescent females 1. The World Health Organisation indicates that the global burden of non-communicable diseases in developing countries will substantially increase over the next decade2. Physical inactivity is one major factor leading to an increased prevalence of obesity and the health burden it confers in young people3-5. 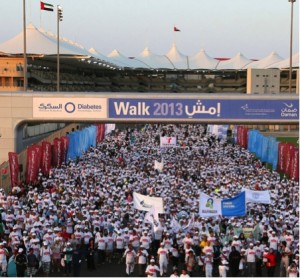 It is necessary to identify and address the barriers to physical activity for people living in the Middle East and other developing regions to reduce the effects of this public health burden. Obesity is taking a particular toll on Arab women, with 45.3% of Qatari and 44% of Saudi Arabian women being obese, nearly double the rate of obese men in those countries6. Over the last three decades there has been a big shift in diet in the Middle East, with Western food, some of which is high in calories, fat and sugar, increasing in popularity, particularly as more women are entering the workforce and fast food is replacing traditional home-cooked food.6 The opportunities to exercise in public are extremely limited for women living in many Middle Eastern countries due to cultural factors such as accepted dress codes and modest conduct. The fuller figure is seen as a desirable trait in women in the Middle East, being considered a thing of beauty and higher social standing.

On a recent trip to Dubai I was struck at how much it had changed since I had last visited in 1994; it has become so much more urbanised, more populated and appears to be thriving in economic terms. I was struck by how few people could be seen walking, cycling or running in public, so different from where I live in London. The summers in the UAE are hot and dry – too hot perhaps to do anything but swim outdoors at that time of year. An ice rink and indoor snow resort have been opened in Dubai and in summer months, indoor leisure centres may be the best way for people to get the exercise they need. Dubai seems very safe, even for the young, and it was a surprise not to see more children playing outdoors. I have been interested at looking into some of the public health measures which have been set up in the Middle East in order to combat the problems of lack of physical activity and obesity in the region. In the UAE, two Imperial College London Diabetes Centres have been set up in Abu Dhabi and Al Ain (since 2006 and 2012 respectively).

Since 2006, the Imperial College London Diabetes Centre in Abu Dhabi (and later the Al Ain centre), has developed a public health initiative which is intended to reach all levels of UAE society using four “pillars”: Walk for Life, Play for Life, Eat for Life and Cook for Life. The Walk for Life is an annual 5K walkathon for the community, which took place last November and saw 20,000 people participate. The aim is to inspire people to walk, build walking communities and encourage healthy lifestyles. Social media, email marketing, public relations, radio, newspapers and magazines advertised it. Friday sermons across approximately 2000 mosques also mentioned the event8. During the event, 633 people took part in a survey to explore their knowledge about the benefits of exercise and their motivations for taking part in Walk for Life. Of those surveyed, 70% said they were aware that a regular walk helps to reduce the risk of diabetes and 70% declared they were interested in forming their own walking groups, requesting more information8. The Walk for Life is due to take place again this year on 14th November 2014.

Play, Eat, and Cook for Life

Play for Life involves a football tournament organised for corporate employees in Dubai. The campaign also supported the Family Development Foundation’s Women’s Fitness Challenge which was spread over 12 weeks and was aimed at educating women in the emirate’s Mirfa region on how to balance work and exercise with a busy lifestyle. Eat for Life promotes a balanced diet to schoolchildren and Cook for Life aims to inspire families to cook healthy meals at home. Cook for Life’s message is delivered by a television programme watched by millions of viewers.

Steps in the Right Direction

Clearly, in the UAE at least, public health initiatives are underway to tackle the burgeoning problem of obesity and non-communicable diseases. Their focus is on addressing people’s lack of physical activity and poor diet choices. I am not presently aware of any other similar initiatives across the Middle East but I hope that they exist. If they do not, perhaps the good example set by the UAE may inspire other nations in the region to follow suit in order to protect the health and welfare of their people.

Independent and joint associations of weightlifting and aerobic activity with all-cause, cardiovascular disease and cancer mortality in the Prostate, Lung, Colorectal and Ovarian Cancer Screening Trial