The NHS Choices ‘Couch to 5K’ Programme, is a nine week scheme consisting of three runs per week, which trains novice runners to run continuously for thirty minutes[1].  NHS Choices has promoted the scheme since 2010. 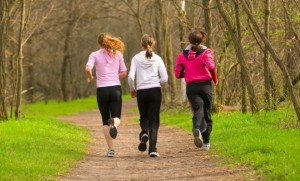 Between January and March 2013, I coordinated a group version of the ‘Couch to 5K Programme’ for staff at the hospital where I was working (read more about that HERE).

In April 2014, just over one year after the scheme ended, I contacted participants to learn more about the longer-term impact of the  ‘Couch to 5K’ scheme. I sent a link to an anonymous online survey to the twenty five staff members who had signed up in January 2013. Nine participants responded and completed the survey.

88.9% of respondents had completed the C25K programme, with 11.1% having attended some sessions. 87.5% reported still running, with 62.5% running at least once a week. 44.4% had taken part in running events since C25K, including local Parkruns, other 5K events, and 10K and half marathon races.

Only 33.3% had experienced a running related injury in the past year (two reported knee problems, and one participant had experienced Achilles tendon and calf injuries).

Two thirds of respondents reported running alone since the programme ended, with one third running with others, and one person running with a club. 22.2% had revisited the C25K podcasts, and 11.1% had used the NHS ‘After C25K’ podcast. One runner commented: ‘The ‘Couch to 5K Programme’ has been a very useful tool to go back to when I have taken a break from running for a few weeks.”

100% felt that one year later, the Couch to 5K programme had had a positive impact on them. One respondent commented that ‘I think it is an excellent programme and it was the catalyst to getting me running again. 5K is a really manageable distance when you just want to maintain fitness.’ Another commented that they ‘sleep better and feel better for doing it (running).’

The results of this survey one year post ‘Couch to 5K’ showed that the majority of respondents were still running regularly, with some increasing to 10K and half marathon distance. The programme positively impacted all respondents, despite a small number experiencing running related injuries over the course of the year. While it is important to acknowledge a small sample-size and self-selection bias, these findings nonetheless support my previous conclusion that the C25K scheme is a valuable and inexpensive tool to improve physical activity as well as quality of life and general wellbeing.